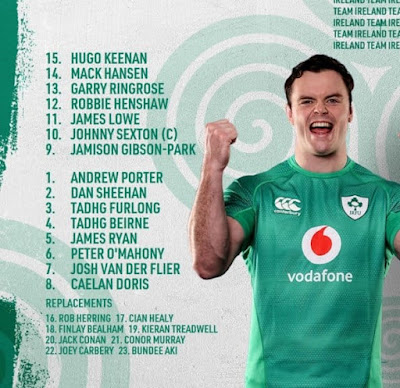 Obviously when all is said and done the All Blacks are the clear favourites this Saturday, but given the first test showed us that our own mistakes will be fully punished, we have to assume that if we can improve our accuracy we'll be in with a fighting chance, and when such things are under your own control that has to be a good thing.

In my writeup for the first test I actually thought Joey Carbery did well in his prolonged cameo, but overall I really do believe Irish fans would make things a lot easier for themselves if they accepted that in the big competitive matches between now and the end of RWC2023, a fit and available Johnny Sexton is going to be our 10 and captain. And this definitely qualifies as a big and competitive match.

We saw in those early stages that we have a gameplan that can make headway against these hosts and if anything our 5-0 lead at the end of the first quarter didn't properly reflect how well that plan was working.

And now with all due respect to Keith Earls who took his try really well last time out, it looks like our coaching ticket always intended to go with Messrs Hansen & Lowe on the wings and as a pairing not only can they be effective weapons on set moves, they can also provide just the kind of innovation required to make something out of nothing.

There were times in Auckland when I thought Jamison Gibson Park might have overcooked a box kick or maybe tapped when it wasn't necessary, but then again when you have a 9 that relies so much on high tempo rugby you have to accept the rough with the smooth and there is no doubt his involvement has been a net positive which has been critical in the team's overall success.

It will all come down to accuracy. We know they have the ability, we know they have a decent plan, it just has to click, plus we already know we can click against these guys.

Similar story for the pack. Not that the All Blacks don't have many different ways of allowing for Whitelock's absence, you still feel we have to take as much advantage as we can, and here I really think it is vital for James Ryan to bring in a stand out performance. Get those carries that extra yard or two, make sure those lineouts get called the right way to suit their given situations, and along with Peter O'Mahony, do your best to make sure Jaco Peyper at least spots some of the home side's shenanigans.

And if that doesn't work, as we were saying on the Harpin pod during the week, then make sure we do whatever it is they are at the breakdown, no matter what it is. If they set the bar by getting away with it, then so should we.

We need all of the above, plus the same amount of overall accuracy we're expecting of the backs.

It wasn't just Carbery who did well from the bench last week and more of the same will be required here. If I were harping from an All Blacks perspective I would have been really pissed off with that second half so we need to be equally effective finishers this time around, especially if we have a lead to protect. Whatever way that breakdown is being policed (assuming it is at all with this ref) we'll have to play along right to the final whistle.

Sorry to mention the Sexton debate one more time but I have to say I was amazed to see so much more consternation over his name being on the team sheet than there was over Scott Barrett's. A red card wouldn't have done us much good in the dying moments last week, but his challenge on O'Mahony certainly looked like a candidate for a citing and even some kind of a ban, but we'll just have to accept that the powers that be saw nothing wrong.

Overall we've every reason to expect our hosts will be even better than last week, and with Will Jordan lurking on the bench we'll need our wits about us for the full 80. But whatever team they put on the pitch, the All Blacks are gonna All Black so what we need to do is get our own side of the equation in order and give them a rake of problems to solve.

The 12 point spread by the bookies is more than fair. And I have to be honest, I really do think it will be a home win (4-6 pts). But my issue with the opinions I have seen from Irish fans on Twitter throughout the day on Friday is that there doesn't seem to be a whole lot of belief that we CAN win. And I wholeheartedly believe we can, and I'm very much looking forward to watching us have a go.

I'll be up early and on the twitter throwing out my two cents throughout the match so be sure and join in, as well as drawing your own conclusions on our Facebook page right after the full time whistle. Here's to another cracking day of test rugby, with hopefully some better results from our side of the planet!!! JLP