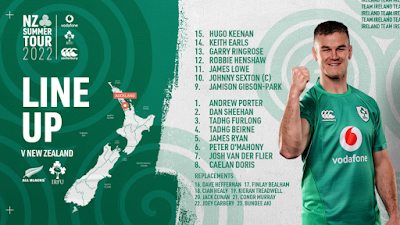 I can't start a preview of this series without a positive statement - this has been a really, really good season for Team Ireland.

Before starting this preview I went back to the corresponding post before our first match of the November 2021 series against Japan to try and get a sense where the mood was, and no surprise my starting point was frustration over the obsession from both Irish fans and media over the province, birthplace and even sometimes schools of each of our selected players.

Then we went on to an Autumn clean sweep before getting within a bad opening quarter in Paris of a Grand Slam, yet still the prevailing topic du jour surrounding our test side seems to be over selection squabbles.

Now to be fair, the overall performance against the Maori All Blacks was hardly one that was going to fill us with confidence ahead of Saturday. The moment which summed it up for me the most was right before half time when Jimmy O'Brien did really well to chase his own kick and haul down the receiver only to have no support to handle the offload, and from there our scramble defense was practically non existent as the home side ran in another easy-looking try. And all this, it has to be noted, was from a squad that I suggested could have been selected by Irish twitter itself, an observation with which many agreed.

But can that display be directly linked to Saturday's? Well I guess it can in some ways, since the injury count from Hamilton had to affect our selection given the relatively small touring squad we brought, but another thing you have to factor in is that for all the talk about players like Frawley, Casey, Timoney and Prendergast knocking on the door of the first team, they still lack game time together the way those elite players do.

And if there's one thing you can definitely say about this starting Irish XV, it's that they have played together enough since November to start at Eden Park from a much more settled place. So let's have a look at the lineup shall we...

Damn Covid is still wreaking havoc with our plans, although the All Blacks have been hit too. I have nothing against Keith Earls at all but I'm pretty sure that most Irish fans would agree that especially given he started on Wednesday, it would be much more ideal for Mack Hansen to be starting against the All Blacks. We can debate over whether the likes Balacoune, Conway and Jimmy O'Brien would have been better options if available, or even that if we had to go with a midweek starter maybe Larmour was the way to go, but the reality is "The Man" and his ability to put in a 70+ minute shift could be crucial.

Otherwise it's all about establish units being able to play the way we know they can. Remember these aren't just the All Blacks we're facing, they are wounded ones after losing two on their End Of Year Tour, something that practically never happens, and now they have three shots against one of those conquerors.

Clearly our critical pairings of JGP/Sexton and Henshaw/Ringrose can't simply run the same playbook the did back in November and expect the same results, but still our halfbacks in particular will need to find ways to get the kind of front foot ball required to keep our side of the scoreboard ticking over, especially in the early stages.

A lot of it could come down to the decision-making and accuracy of our kicking game, and I couldn't even come close to providing a better analysis of this than EK Rugby did with his excellent twitter thread from Friday morning so please do follow this link and check it out.

Iain Henderson is obviously a massive loss, although in a way it does provide a natural solution to our perennial What To Do With Tadhg Beirne Problem. He deserves to be in there but where? Second row will do just nicely and we can definitely use his trademark jackling and lineout-thwarting.

But we'll also be needing a standout display from James Ryan. I reckon this represents a golden opportunity for him, coming not long after Leinster's disappointing end to the season but now without the captain's responsibilities he has another big occasion to focus on his game against a very talented and experienced pairing.

In the back row, it could be said the Doris/JVDF/Conan trio was the backbone of all the 2022/23 success for Ireland but that said with the RWC2023 over a year away it is crucial that we look at alternatives and with Gavin Coombes doing so well during the week, I have to assume there are plans for him to be involved in this series at some stage.

Still, I can see why Peter O'Mahony has been called upon and with all due respect to James, I hope the Munster man is our pack leader because we will needed his eagle eye on all the little niggly bit and pieces we know their pack will be up to, not to mention all the niggly bits and pieces he can bring to the play himself!!!

Obviously the name Cian Healy caught everyone's attention after being stretchered off in Hamilton, but while it was great to see him available after what looked like a serious injury, what was more notable was his selection as replacement tight head, especially given Finlay Bealham was listed on the loose head side. No better man than The Loose Head on the twitter machine to explain this...I reckon he's spot on.

Breaking: Finlay Bealham has been ruled out of tonight’s Test with Covid.

Ed Byrne’s flight was delayed, only lands this evening.

Michael Bent will do the warm-up as one of the additional players.

When you take our replacement bench overall I have to say that I don't see an awful lot of "impact" coming from it, in that I'm sure most are able to do a job replacing the starters, but let's just say we really don't want to be having to do a lot of chasing in the final 20 minutes and if we do, as much as I like what Bundee can bring, I just hope we don't regret involving Larmour somehow in the 23.

Like I said earlier, the All Blacks will definitely be determined and ready. On our podcast during the week, Paul "Driving Maul" Bains gave an excellent account of where things stand for them - with Sam Cane as captain they're apparently forced to build a back row which will always be formidable yet still not their ideal one, which is a scary prospect yet still hopefully one out of which we can make an advantage.

Paul also pointed out Reiko Ioane's reluctance to pass, something which James Lowe probably used in his heroic smother tackle towards the end of last November's victory and we'll see if it gives us an edge at some point on Saturday. But whatever about their supposed weaknesses in some areas, we know they can more than make up for them with excellence in others. Again I'm inclined to point to Keith Earls as a critical part of our lineup as he starts opposite a debutane in the wonderfully-named Leicester Fainga’anuku.

It would be an insult to the season we have had for me to say we can't win on Saturday. Clearly the odds are against us for all the reasons I have laid out above, plus the historic factors like a lack of victory by us on New Zealand soil plus by anyone at Eden Park for a long time.

So I'm definitely not going to say we CAN'T win, but if we are going to, we are definitely going to need a really good start that includes a bit of luck going our way. So while I want to be confident in my prediction, I can't see the bounce of the ball helping us so my prediction is for a 3-point home win, which hopefully we'll see as a net positive all things considered but I guess that depends on how the 80 minutes goes.

As always I will be offering my two cents throughout the match on twitter, join in the discussion and at full time head on over to the Facebook page to leave your thoughts.