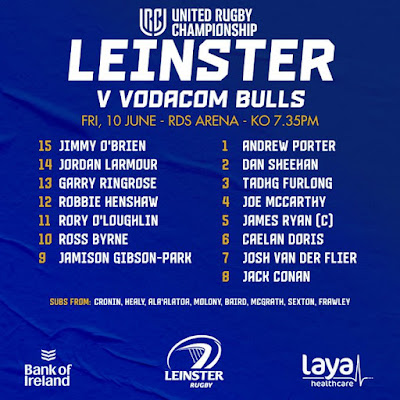 Seems like quite a bit has happened since 5:15pm on Saturday, September 25, 2021 at the Aviva Stadium when we hosted the Vodacom Bulls in the first round of this new-look competition.
Nobody was quite sure how the United Rugby Championship would make it through the season, and it's true there have been complications, like Covid cancellations and disappointing results from two of the five participating nations.
But now we're left with four, and with the home side prevailing in all of the quarterfinals, that leaves us with the best. And few who followed the 18 rounds could argue that all four have earned the right to get this far.
Of course despite the fact that both Leinster and the Bulls won last weekend, they couldn't have been more opposite victories if they tried. We got off to a shaky start but still put the Warriors to the sword, while the Pretoria-based franchise managed to win one at the death with a boot that didn't actually belong to Morné Steyn.
The hope for Leinster fans is that if the 12-try extravaganza from last week has done anything positive it has helped us put Marseille behind us to focus on the task at hand with a big shiny new piece of silverware very much within our reach.
Only a few tweaks to our lineup for this one, let's have a look through it shall we...
BACKS
After his late heroics in chasing down Jack Dempsey last weekend you'd have thought Ciarán Frawley might be in with a shout of retaining his place but we all know it's rarely a case of being "dropped" rather one of an overall selection plan and I dare say Robbie Henshaw was always going to return to the 12 jersey for this one.
He reunites with Garry Ringrose and while I love having the options of Bundee Aki and James Hume for the Irish center pairing I kind of wish I'd see these two mentioned more for the way they complement each other both with and without the ball, and they'll get a decent test on Friday with the likes of an in-form Cornal Hendricks.
Still no James Lowe or Hugo Keenan in the 23 which means the back three remains the same, and why shouldn't it especially after Jordan Larmour's recent return to his mesmerizing best; he wasn't just stepping players last time out either, there were some notable defensive contributions too.
Ross Byrne will be extra keen to have a good outing since he'll want to hand a winning position over to his club captain, and he'll have to take more of the creative responsibility here with Frawley on the bench but there are plenty of options around him to get past any stubborn Bulls defence and I reckon between himself at JGP we should be ok.
FORWARDS
What a season it has been for Joe McCarthy - we have rightly sung the praises of Ross Molony for his powerful yet often just below the radar performances, but considering we might have wondered about our options at lock in our wildest dreams we never would have thought we'd get to the end of the season with two great starting partners for James Ryan.
The front row selection reminds me most of that opening day victory, when it was the first compeitive outing for Andrew Porter since his return to the 1 jersey, now while our scrum might still have some issues I doubt there are many teams in World Rugby that would turn down the chance to start with this trio.
And speaking of enviable trios, the Doris/JVDF/Conan axis is back in business, and we'll clearly need them as their opposite numbers are likely to be where the visitors will be looking to get an edge.
Bare minimum as always will be lineout accuracy but I'd also like to see us go after a few more defensive rucks and maybe tempt some jackling penalties from referee Andrea Pirardi.
BENCH

#LEIvBUL comes with quite the "Catch 22" - however the match is poised going into the final quarter, the two sub outhalves have "just" the 173 test caps and 1,723pts between them...#URCisBestLeague

I always say this when Johnny Sexton is on the bench...here's hoping we don't need him!!! But come to think of it he's not the only experienced head he get to throw on in the closing stages, says a lot when you've three on the bench who have captained the province on multiple occasions and that's still not including Messrs Cronin and Healy!
OPPOSITION
If I were Jack White I'd be all over that Champions Cup Final video to see how ROG & co went after us. But since Jake White is actually Jake White, and has won a World Cup and all, he might put more confidence in his own way of doing things.
There's no doubt that they have come on in leaps and bounds since that shaky start at the Aviva - and for those who say that result might be down to a lack of internationals back then I say that in their pack for this Friday, where they will probably try to exert the most dominance, the only starting change from last September is at hooker where Johan Grobelaar gets the nod. Look out for their locks too especially Ruan Nortje.
Having started the season with Goosen at outhalf and also having Morné Steyn at their disposal, they have settled with Chris Smith at playmaker to good effect and with Tambwe and Hendricks ready to make the most out of any space we'll need to be at our best with both defence and discipline.
PREDICTION
Now I know we're the home side, and I know they've had to send a decent chunk of the short turnaround travelling, and I know we're reigning champions, but I have to admit I did not expect the bookies' spread to be as many as 21 points. Obviously I believe we can do that if we're at our very best, but this is cup rugby and we need to settle quickly particularly in the forwards.
So while I'm reasonably confident we'll do it, I can't bring myself to go that high with a prediction so I'm going to keep it relatively conservative and say that we'll get the job done, possibly double digits but I'll say around 8-10 points.
Last week I was right about Glasgow scoring first and were this week's visitors to do the same I wouldn't be surprised either.
WHERE TO WATCH
It was great being back at the RDS last Saturday although it was freezing - as I write we've just had a really warm Thursday so hopefully it will hold to tomorrow evening although there's talk of a bit of rain around kickoff time. Hopefully I'll see you down there but if not you'll catch it on TG4, Premier Sports and of course URC.TV
GET INVOLVED IN THE DISCUSSION
On the podcast during the week I challenged the panel to a quiz with questions on each of Leinster's regular season matches in the URC, click here to see if you can get the answers yourself. As always I'll be on the twitter machine throughout the match and be sure to hop on the Facebook page yourself after the full time whistle to leave your own thoughts.
Here's to the boys in blue reaching another final!!! JLP
VODACOM BULLS : 15 Canan Moodie, 14 David Kriel, 13 Cornal Hendricks, 12 Harold Vorster, 11 Madosh Tambwe, 10 Chris Smith, 9 Zak Burger.
1 Gerhard Steenekamp, 2 Johan Grobbelaar, 3 Mornay Smith, 4 Walt Steenkamp, 5 Ruan Nortje, 6 Marcell Coetzee (CAPT), 7 Arno Botha, 8 Elrigh Louw.
IMPACT (16-23): 16 Bismarck du Plessis, 17 Simphiwe Matanzima, 18 Robert Hunt, 19 Janko Swanepoel, 20 WJ Steenkamp; 21 Embrose Papier, 22 Morne Steyn, 23 Kurt-Lee Arendse.
United Rugby Championship 2021/22 - Semifinal
Friday, June 10, 2022
KO 7:35pm
RDS Arena
Referee: Andrea Piardi (FIR)
AR 1: Craig Evans (WRU)
AR 2: Gianluca Gnecchi (FIR)
TMO: Matteo Lipperini (FIR)
Live on: TG4, Premier Sports, SuperSport & URC TV.
at June 09, 2022