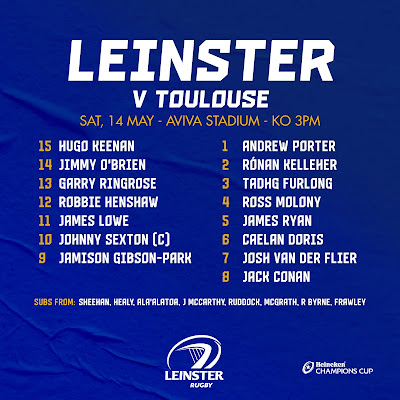 Our task as Leinster fans this Saturday is simple.
WEAR. BLUE.
This season's quest for Leinster's fifth star has to involve exorcising the demons from seasons past - since the fourth was won in 2018 we have fallen at each of the last three hurdles.
Which means last weekend's controlled victory at Welford Road took care of our 2020 campaign, where we fell at the quarterfinal stage to a Premiership outfit, the same one that had our number in the final the year before. Hopefully we'll be able to tick that final box, but only if we can first avenge what happened last season, when it was a Top 14 side ending our hopes in the final four.
Obviously it was no fun going back and finding links to those three defeats, but I honestly believe that those are what have been guiding our European progress this season, with the boys in blue managing to find a very high base level of performance so far no matter what the opposition.
And if the consensus is true that it was European experience that made the difference at Welford Road last Saturday, then that is something on which we most certainly cannot rely this time, as Toulouse know a thing or five about winning this competition themselves.
However...there is one area where we have the advantage. Last year the semifinal was played in La Rochelle. Now we're on our home turf. And of course this means as fans we can wear blue from top to bottom, inside to out, with hats, scarves, flags and anything to help create the Leinsterest of Leinster atmospheres.