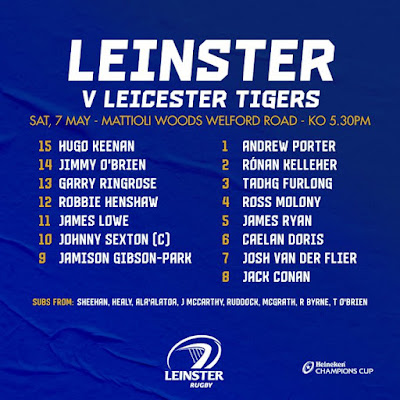 "We were outthought, outplayed and overpowered on each of those occasions and we will have been preparing for this match on Saturday since the first day of preseason"
I was a guest on the Leicester Tigers podcast The Rolling Maul during the week and I wanted to give them a sense of how focused Leinster have been on European matchdays this season, so that quote above made reference to the times we fell short in 2019, 2020 and 2021 providing the motivation for our latest shot at star number five.
And with all due respect to Montpellier, Bath & Connacht, this represents our first big test which will show whether or not this squad is ready to go all the way.  I mean, whatever about our annoyance at how we got seeded as low as we did, having to travel to the Premiership leaders is about as good a test of title winning credentials as you can get.
What has struck me most about Leinster's European campaign this season is that no matter what the opposition, we seemed determined to play our strongest available 23, which in turn means our coaching staff must know our strongest available 23, and bar a name here or there, this is pretty much the squad we could have predicted before it was announced so let's go through the team shall we.
BACKS
From 9 to 15 this definitely was the predicted selection. As many love to point out, it is the Irish backline bar Jimmy O'Brien, who may have made the shortlist for Euro POTY be virtue of a four-try haul against Bath, but also fits like a glove in the Leinster set up.
And another point I made on that Rolling Maul podcast is just how critical Jamison Gibson-Park will be to our chances. Of course all eyes will be on skipper Sexton, but if we are to get off to a good start we will need our 9 to set the tempo as he has done all season. Sometimes he looks as though his body is moving to the next breakdown before his hands are done passing from the current one! If he can dictate the pace it will allow J10 to run his variations and keep the home defence, which will be clearly out to thwart us and slow us down at every opportunity, guessing every time.