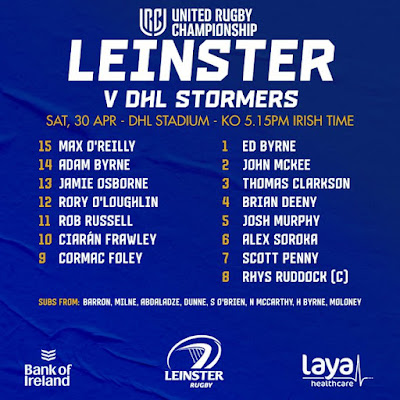 Our first encounter against the new South African arrivals to the competition was on opening day at the Aviva Stadium, in what turned out to be a comfortable enough victory over the Bulls.
Then we had to wait until February 2022 for our next challengers from the southern hemisphere, when it was the Lions from Johannesburg who had the audacity to come to the RDS and deny us a try bonus point.
Next it was our turn to do the travelling and last weekend in Durban we came within a phase or two of pinching the spoils right at the death, having to be happy in the end with a losing bonus point against the Sharks that brought us within touching distance of a guaranteed first place finish.
As for this fourth and final episode, we have the biggest test of the lot. 1st vs 2nd on the table and as close to a champions v challengers contest as you can get from a predetermined fixture list. And that it takes place on a weekend when there's so much up for grabs in the playoff race you can really see that the "URC = Best League" may not be as tongue in cheek as we thought at first.
But while the opposition might be a little better than last weekend, Leinster's task is very much the same. Maybe we don't have home advantage, maybe we don't have our "elite" squad because of a match the following weekend, but with full coaching staff available throughout the week I very much doubt the 23 will be putting on their jerseys assuming they will lose whatever the form books say, so let's go through the selection shall we...
BACKS
I really don't want to be too unkind to Harry Byrne here, but against the Sharks if it wasn't for the actual number on Ciaran Frawley's back you'd swear he was the one playing 10, and not just because of the placekicks. And there have been calls by many Leinster fans for him to return to his out half role for quite a while now, though I assumed he was to remain at centre for the foreseeable.
Yet here he is, nominated as playmaker, and it gives our lineup an extremely different look to that we have gotten used to during times when our internationals were unavailable.
It had seemed like we were going with two different types of lineup - one for Europe where the 12 role would have a strong ball carrying player like Robbie Henshaw, and one for the URC where Frawley or sometimes Harry Byrne would bring a bit more creativity to the position, and indeed that was how we lined up last week.
Now, it is Rory O'Loughlin who is accompanying Jamie Osborne so it would appear that we are opting for a game more reminiscent of the former, which to be fair does seem appropriate given who it is we're up against.
There are a lot of changes to the starting backline - JO being the only constant position wise - which might not be ideal in one sense but in another it would have been a poor show not to give as many as possible a starting chance.
And it's not like we can't expect ROL and JO to do a decent job holding down the fort in our midfield, while Rob Russell, Adam Byrne and Max O'Reilly have all shown form in the past, plus Cormac Foley did really well off the bench in Durban.
But if there is to be a route to Leinster prevailing on Saturday in Cape Town, it is likely Frawley that needs to find it and this will be an excellent chance for him to showcase his talents.
FORWARDS
Many changes in the pack also, though the spine of hooker John McKee, lock Brian Deeny and back rowers Scott Penny (like I always say, bet against him scoring a try at your peril) will help a bit with continuity and the likes of Jush Murphy and Alex Soroka bring a lot of physicality when we most certainly need it.
Last time out our lineouts worked really well, and although we did struggle at the scrum, it most certainly wasn't all bad as I showed in our latest TikTok video. More of the same pushback will be needed if we are to have any hope of coming away from the DHL Stadium with anything.
No doubt the key will be discipline. There is a fascinating "irresistible force v immovable object" subplot to this contest and while our famed defensive structures try to cope with the home side's fondess of playing KBA we need to make sure our tackles are accurate.
BENCH
6/2 split not surprising and as always we need to hope our starting backline remains intact for as long as possible. Wouldn't be the worst thing for Harry Byrne to be brought on while Frawley remains on the park to give the home side a slightly different look to contend with.
In the forwards, all six will be needed, of that you can be sure. This will definitely be the biggest test our 80-minute defensive stubbornness will have seen all season.
OPPOSITION

That tweet should tell you all you need to know about the task we have ahead of us, in fact I'm pretty sure the Stormers have leaders in other categories too but I was afraid to confirm it.
For me the one to look out for is Evan Roos. Last time out against Glasgow they had to wait until the final play of the gam to get their try bonus point, and even though they had possession in the 22 for a while it wasn't until it got into Roos' hands that the score was a certainty, even though he still had some defenders to beat. That said, he'll have more than a worthy adversary in our skipper Rhys Ruddock.
Probably the most notable facet of this squad however is their cohesion - yes, there are several strong and talented individuals but they know how to play together and we'll have to be at our best to keep them at bay. Also same as last week, while we would like to get an edge from a territory game, all inaccuracies from kicks out of the hand are likely to be punished.
PREDICTION
Bookies are going for a 13 point home win, and to be honest that looks about right although we all know that would be very different with full squads each side. Still, I'm going to show enough confidence in both the Leinster coaching staff and our talent pool to suggest we might give them a scare or two throughout and even have the cheek to escape with another bonus point if not more.
So I'll give a similar prediction to last week, a 5-7 point home win, although like I said earlier we'll need to have some kind of traction with both set pieces and discipline to have any kind of a chance.
GET INVOLVED IN THE DISCUSSION
It's another busy weekend with the Irish Women's final Six Nations encounter later the same evening plus the other provinces all in action. As ever you can follow me on Twitter to stay in touch while the match is on, then as the full time whistle blows be sure to head over to the Facebook page to leave your two cents on what just happened. JLP
Stormers : 15 Warrick Gelant, 14 Seabelo Senatla, 13 Ruhan Nel, 12 Damian Willemse, 11 Leolin Zas, 10 Manie Libbok, 9 Herschel Jantjies
1 Steven Kitshoff (captain), 2 JJ Kotze, 3 Frans Malherbe, 4 Adre Smith, 5 Marvin Orie, 6 Deon Fourie, 7 Hacjivah Dayimani, 8 Evan Roos.
Replacements: 16 Wilmar Arnoldi, 17 Brok Harris, 18 Neethling Fouche, 19 Salmaan Moerat, 20 Junior Pokomela, 21 Ben-Jason Dixon, 22 Paul de Wet, 23 Juan de Jongh.
United Rugby Championship 2021/22 - Round 17
Saturday, April 30, 2022
KO 5:15pm
DHL Stadium
Referee: Craig Evans (WRU)
AR 1: Aimee Barrett-Theron (SARU)
AR 2: Morné Ferreira (SARU)
TMO: Ben Crouse (SARU)
Live on: SuperSport, RTÉ 2, Premier Sports & URC TV
at April 29, 2022