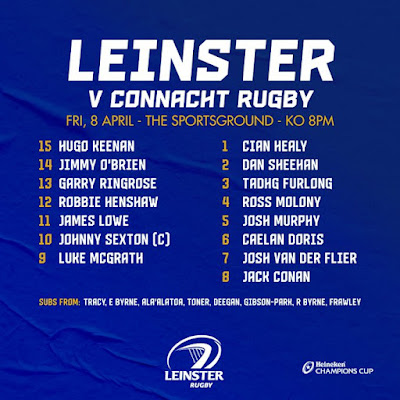 Hopefully the Champions Cup will eventually return to the four-team pool format asap because that always delivered a straightforward route to qualification for the knockout stages - that's not to say I don't understand what they had to do this season and let's face it, of all the fans who's teams are left in this competition, Leinster's have had to be more understanding than most.
One of my favourite features of the pools was the "back-to-back" series that was usually played over two weeks in December, with the same two teams squaring off in consecutive weeks home and away, something unique in the sport outside Test level and it always produced some nice little niggles carried forth from one match to the next.
Still, this year the organizers have managed to retain that process, albeit in a slight different and arguably clunky way, with the introduction of a two-legged round of 16. Obviously it was done to maximize revenue, but the fact that teams are playing for aggregate score and not pool points makes the dynamic somewhat different.
And if Leinster's performance against Munster last weekend is anything to go by, especially when you factor in the ruthlessness with which we approached our final two pool matches against Montpellier and Bath, there really does seem to be an air about this squad that when in full "European" mode there are no amount of format changes and COVID rulings that will prevent us from being locked in a focused on the quest for that fifth star.
Oh, and one more thing, as if we didn't already have plenty of motivation to perform at our best when it comes to the business end of the season, there was also the terrible news during the week about Dan Leavy's forced early retirement so the boys in blue will now be extra keen to see out the season with more silverware.
Well, when it comes to this particular selection for our first match in the knockout stages, you can really tell we mean business so let's start going through the 23 shall we.
BACKS
Obviously the most notable thing about the team sheet is a name that is not in the starting XV. Well and all as Luke McGrath has played this season, often as captain, there can be no disputing that Jamison Gibson-Park has made the 9 jersey his own this season in both blue and green. And I see many on Twitter since the team was named suggesting he had somehow been "dropped" for this encounter in Galway.
I see it as something different altogether. With all due respect to our Western cousins, if Leinster have designs on the final four and beyond, we have to plan our squad selections accordingly and thus if we can get through this stage of the competition without much game time involving both JGP & Sexton as halfbacks, it could surely help keep our opponents further down the line guessing as to how we can play.
But again that's not so say Luke isn't more than up to the challenge in Galway, and with a backline around him that is very much our first choice for Europe, our expectations can be high. And I definitely include Jimmy O'Brien in that first choice classification - he may have played more at full back while the international players were away but he has certainly shown he can play at this level and it really is a team sheet from 10 to 15 that has a settled look about it.
FORWARDS
Obviously the Dan Leavy news was the low point of the news releases during the week but at the other end of the scale we had this from Leinster's injury update :

All four of Andrew Porter (ankle), Rónan Kelleher (shoulder), Jordan Larmour (hip) and Michael Milne (calf) are due to step up their respective training programmes this week.
A call will be made later in the week on their availability for Friday evening.

That Porter in particular is close to returning to the side is really good timing for this stage of the season, although the pair of front rows we sent to Thomond Park still did extremely well.
Where we do look to be a bit light is in the second row, where both James Ryan and Ryan Baird would surely feature in our best 23 so for this first leg we have gone with Ross Molony, who to be fair is having a banner season, and Josh Murphy, himself bound for Connacht.
Our back row needs no introduction, but hey, I'll do it anyway. Doris, JVDF and Conan complement each other's game so well it's often difficult to choose between them for Player of the Match and last weekend was no exception.
BENCH
I'm assuming the hope is for JGP & Ross Byrne to be introduced as early as possible in the second half depending on how the scoreboard is looking, and after some fine displays since his brief injury layoff I doubt we have a better candidate for the 23 jersey right now than Ciaran Frawley, in fact it won't be long before he's starting in Europe I'm sure.
When it comes to the pack, this replacement front row is the same one that did so well at the end of the first half in Limerick and deserve recognition here, while Devin Toner and Max Deegan make up the remaining places and the hope will be that we continue our 80-minute displays of cohesion we've shown this season, especially on defence.
OPPOSITION
During the week I spoke to Padraig "@the2ndRow" Kelly on the podcast about how the match is looking from Connacht's point of view.
Obviously the URC meeting a couple of weeks ago might have been at the same venue yet was also different for many reasons, and with the likes of Bundee Aki added to their lineup and hopefully for their sakes nobody to be removed by the officials like last time, we can expect nothing less than a tough battle throughout.
Padraig had been hoping for Caolin Blade to start at 9 as he adds a bit more pace than Marmion although that's marginal and as always is the case with jack Carty on the park their halfbacks' ability to make the most out of every transition and broken play situation will be key to their success.
They also have great options in the pack with Gavin Thornbury back in the lineup plus Cian Prendergast doing really well in their back row along with Arnold and Butler - no matter how much I harp on our forwards, we know Andy Friend's side have the ability to make everything out of home advantage.
PREDICTION
Remember, this is just the first of two legs where the scores will be added together. The way I see it, Leinster's primary goal should be to stay within ourselves, see what their plan is and do what we can to negate it hoping to give ourselves a decent result to bring home.
However, that is also kind of what we said about those matches against Montpellier & Bath and instead they seemed to be more interested in making a statement, so we'll see what way we set ourselves up on Friday. The bookies have us winning by 13, obviously I'd be delighted with that but truth be told I'd be more than happy with just getting into the quarterfinals and working with what we have then.
So I'd say any kind of a win on Friday would make me happy, although given how close this is to our ideal lineup I suppose I should hope they can stay ahead by a score at least so I'll go for an away win by 7-9. That said, anyone who says there is no path to victory at all for Connacht is fooling themselves.
GET INVOLVED IN THE DISCUSSION
Sadly I can't make it down to Galway myself, will instead have to rest easy for the return in the Aviva, but whether you're there or not please do keep up with the discussion online - we'll be in all the usual places and as always at the full time whistle head on over to the Facebook page and leave your thoughts.
And of course best wishes to the Irish Women this weekend in the third of their Six Nations matches against Italy, as well as to both Munster and Ulster who have tough European challenges of their own. Here's to a cracking weekend of rugby!!! JLP
Connacht : 15. Tiernan O’Halloran 14. John Porch 13. Tom Farrell 12. Bundee Aki 11. Mack Hansen 10. Jack Carty > (C) 9. Kieran Marmion
1. Matthew Burke 2. Dave Heffernan 3. Finlay Bealham 4. Gavin Thornbury 5. Leva Fifita 6. Cian Prendergast 7. Conor Oliver 8. Jarrad Butler
Replacements : 16. Dylan Tierney-Martin 17. Tietie Tuimauga 18. Jack Aungier 19. Oisín Dowling 20. Abraham Papali’i 21. Caolin Blade 22. Conor Fitzgerald 23. Sammy Arnold.
Heineken Champions Cup 2021/22 - Last 16 1st Leg
Friday, April 8, 2022
Kickoff 8pm
Sportsground
Ref: Karl Dickson (England)
AR1: Michael Hudson (England)
AR2: John Meredith (England)
TMO: Stuart Terheege (England)
BT Sports / bein Sports
at April 07, 2022