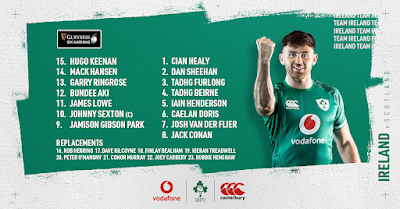 Ireland's goal on Saturday is to put ourselves in a position to win the 2022 Guinness Six Nations Championship.

Unfortunately I feel I have to lead my preview with this, because I see a lot of talk about Triple Crowns and personally I don't even see that as a consolation prize.

And before I continue on that subject - no, I'm not taken anything for granted as to what way the result is going to go on Saturday, I'm just debating what we're playing for. While I understand the history behind the TC, I still believe its relevance in modern day rugby is minimal. As long as 1st place on the table is up for grabs, that is where the focus should be.

If Ireland can play the way we want on Saturday, we can "get the job done" and that means five match points. And this is without doubt a matchday squad that is able to do just that. As always, I've read all about "why is this guy there?" and "why isn't this other guy there?" but none it takes away from any of the 23 calls in my book.

I'm going to start with Hugo Keenan here, because I rarely do. The reason I rarely do is that we've gotten used to him. Just how amazing was he under the relentless high balls coming down at him in Twickenham.

And he can click into gear and score a try on a winning line. AND he can provide a telling clear out in the first minute as well as the last as I highlighted in my writeup. The dictionary definition of a "Mr Dependable" in the very position you really need one.

Some might say Bundee Aki was a candidate to give way in our back line, though that would speak less to his contribution and more to Robbie Henshaw's off the bench. But by the same token he hasn't done anything to really lose his starting berth. The fact is we'll need all four of our quality centre options (including Messrs Ringrose and Hume) down in New Zealand so when they're all available the coaches can tailor their selections to what they want on a given day.

On the wing, Andrew Conway probably would have started if fit but there's no problem bringing Mack Hansen straight back in, as he was unlucky to sit out last time. I understand there are those like Balacoune who were capped before and played well, but I honestly believe Mack was in the right place at the right time playing the right way and throwing him in the deep end was a big help to us at the start of our campaign and he played like he belonged.

No need for me to stress the importance of our starting halfbacks, the entire attacking ethos of this particular Irish vintage revolves around the tempo and cohesion provided by JGP & our captain.

The debate over what happened in the scrums at Twickenham will go on for a long time, but the best way for Andy Farrell & co to voice their opinion would be to select the exact same front row the following week, which is what they've done. Some cynics might suggest they were short on alternatives but for example a Kilcoyne/Herring/Furlong trio would have been fine most weekends yet would send the wrong message for this one.

James Ryan's forced exclusion made for a very easy decision in the second row. Iain Henderson had an uncharacteristic mistake or two against England but certainly not enough to leave him out, he's an undoubted leader in this squad and I expect nothing but 100% from himself and Tadhg Beirne on Saturday.

Then there's the back row. I stood up for Peter O'Mahony starting last week, but I still believe Doris/JVDF/Conan is the best back row trio for this squad for the very simple reason that it's clear Andy Farrell believes it and they really do seem to complement each other perfectly under this system.

Last week I said I'd prefer Craig Casey to Conor Murray on the bench, but the way that game turned out, we really needed the latter's experience in those closing stages so it would be harsh to leave him out this time around, although I still believe a 9 like Casey (or Cooney or Blade) is the way to go if we think we might be chasing points late on under normal circumstances.

But it was the overall contribution of our bench that made a big difference last time out, both with and without the ball, and I'd expect more of the same here.

Sidenote - if you'd like to test your friend's rugby knowledge, here's a good quiz question for you...

Which player leads the Irish team in the stat category of "Most Points Scored Per 80 Minutes in the 2022 Six Nations?"

During the week I had two Scottish fans on the podcast and we talked about their performance against Italy as well as their options for this Saturday. I put to them the possibility of leaving out Finn Russell from the starting lineup and it appears Gregor Townsend has decided to give that a go - whether it was down to me or not I guess we'll never know...

For my part I think it might bring a bit more stability to the Scots approach, leading them to get more out of the players along the backline instead of relying on the odd moment of brilliance to get things done.

That said, they will still be up against an Irish defensive set up that may have played a lot of rugby against shorthanded teams of late, but still to have only conceded 3 tries this late into a tournament is no mean feat so it really is a challenge for Blair Kinghorn.

I'm also expecting more from their backrow - Hamish Watson and Rory Darge are both 7s you really can't leave out so it makes sense playing them together and if they start to gel more than they did in Rome it could make life difficult for us.

But overall I can't really see this Scottish 23 as anything but one designed to thwart and make the most of any slight opportunity (with Ali Price best placed to do this) so going back to what I said at the start, if we can impose our own game early, we should have enough to overcome it.

This is going to sound arrogant but I have to admit I thought the bookies would have us down for a bigger win than 17 points, so I guess my prediction will need to go beyond that.

Obviously what with the red cards from previous week together with the laws of swings and roundabouts, all forecasts have to come with caveats, but going on form if we want to be Champions by the end of play on Super Saturday we really have to be winning this comfortably so I'm going to back the boys to win by around 20-22.

Not going to the Aviva myself unfortunately but as it's my birthday weekend I will be frequenting a local embibing emporium for at least matches 2 and 3 of the triple header so I may not be doing as much social media harping as usual throughout but still be sure and get involved in the discussion and at the full time whistle head on over to our Facebook page and leave your thoughts.

Here's to an exciting end to the Six Nations, if it gets even close to what happened in 2015 we're in for some fun! Also best of luck of course to Richie Murphy's Wolfpuppies in their Grand Slam bid on Sunday! JLP

Quiz answer - Kieran Treadwell who's one try off the bench gives him an average per 80 mins of 21.1