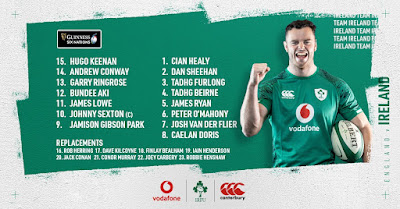 That's how often there's top class rugby for us to view from the couch on Saturday so I hope you're all well stocked, and also well organised with extra screens because there are a couple of big contests for Irish fans overlapping.

Just in case you're not familiar with these Harpin' pages, every Thursday we post a list of upcoming egg-chasing broadcasts on Irish telly, and on March 12th the action is bookended by Super Rugby clashes in the wee small hours of Saturday and Sunday mornings respectively, with Super Rugby, Six Nations men's senior and U20, URC, Premiership, Top 14 and even Major League Rugby all covered in just over 24 hours.

But of course only three matches stand out for me, with those at Twickenham, StoneX Stadium and the Kingspan grabbing my attention although the one in the middle has to be unfortunately relegated to a tablet perched within view of the main telly in the corner.

And as I write this preview, I know I will have to update it on Saturday morning as the Wales/France clash from Friday night will have gone a long way to determine how much Ireland are still in contention for the 2022 senior title, but still I plan to harp with a confidence which has been earned by the overall performances of this Irish team.

[SATURDAY MORNING UPDATE : Well basically now if Ireland are to win the title we need England to be poor this week and brilliant next. Not that I'm completely ruling that out, mind you...]

Turn the clock back to just before last year's Autumn Internationals and the thoughts of Eddie Jones branding us as "favourites" as we head to London would have made me laugh out loud, yet now, not only is he speaking the truth, I'm actually not that concerned about the so-called "mind-games" affecting our squad.

Of course it won't be easy, of course England will do all they can to knock us of our game but to those two "of courses" I add a third - we will be ready for them.

Now to the team selection, where I'd like to go against the grain from social media since the announcement was made and focus more on who is playing rather than who isn't.

Speaking of social media, did you know Johnny Sexton signed a new contract this week taking him through to the end of RWC2023? Wouldn't really know it from the Irish twitterverse, where we often see the contract signing of a prospect not likely to see European action for a couple of years hailed (mostly correctly) as a "great bit of business".

Yet now we have our test captain, arguably the driving force behind the most successful era in Irish rugby history and definitely at the top of his game right now, providing clarity on the end game of his career and the silence has been deafening. Although there do remain some questions (like will he go on NZ tour? will he play much for Leinster next season and/or remain as captain?), no matter what province you hail from, the net result of this news should be overwhelmingly positive.

And whatever about who we might have waiting in the wings beyond that World Cup, the longer he is on the pitch wearing that 10 jersey on Saturday, the greater our chances and I defy anyone to argue that.

But we must not forget his fellow halfback Jamison Gibson-Park, who has himself been key in this run of form that even got us close to recovering from a poor start in Paris. For all the perfection that Sexton demands from those around him in the backline, JGP's speed around the breakdown is what has given us that extra split second needed to make hay on every possession.

On that very backline, while Mack Hansen most certainly did not put a foot wrong up to now, it does not surprise me that Farrell has gone back to Lowe and Conway for the wing positions, mostly because of the specialist areas they cover so well, namely James for the booming left boot clearances and Andrew for his high success rate in kick chases. With Mr Dependable Hugo Keenan at 15 it really is a back three that covers all the bases for us.

Then in the centre, with all due respect to the many other contenders out there, I really do believe that in Aki, Ringrose, Henshaw and Hume we have all we need for now and almost any combination would get the job done. Possibly Bundee brings that teeny bit more full on physicality for this particular opposition, although hopefully not enough to get on Mathieu Reynal's bad side.

I know this is an unpopular opinion, definitely outside of Munster anyway, but I see sense in having Peter O'Mahony out there. The way the two sides stack up I can only see England trying to bully us in the forwards and there's no better man than Pete to counter that as well. Again, we have to hope that whatever goes on doesn't lead to cards against us, but if we play things right they could go the other way.

One more advantage of POM starting is that Eddie & his coaches won't be able to learn too much from the video sessions about our preferred back row trio of Doris, JVDF and Conan, all with the possibility still there to get them together for the final half hour.

Clearly Porter is a big loss to our front row but then again we have bags of experience in reserve with both Healy and Kilcoyne, and I'd say amount of caps was probably the final factor in deciding the order they line out but still I expect nothing less than 100% from the loose head position for 80 minutes.

Another happy dilemma for us was in the second row, where I'd say Farrell's plans going into the season involved starting with Henderson and Ryan only for a combination of injury and Tadhg Beirne doing Tadhg Beirne things forcing a rethink - again, we are well set for the full 80 from our locks.

Put together on a day when we'll need everything from our pack from set pieces to carrying to clearing out to "dark arts", this set of 8 seems to have a really good mix.

I promised I wouldn't mention players I think should or shouldn't be there so all I'll say is that while our reserve halfbacks have played with each other many a time in both red and green, I'd still rather they were introduced on Saturday at a time we were shepherding a lead home rather than trying to claw back a deficit.

Elsewhere along the bench I have already pointed out the tough starting calls which make for perfect replacements, and while I may not have added Herring and Bealham to that list, they are still vital members of the squad who are no strangers to this level and there's no doubt we will need every ounce the full 23 can give us.

Another less publicised thing Eddie said about this match is that it is like a "semifinal" and it's true our win-loss records going into Round 4 are identical with the winner guaranteed to be mathematically still in the race for the title whatever happens in Cardiff. But a closer analysis of those records tells a different story.

England have really underwhelmed this season, so form really won't be in their favour going into Saturday. But one thing they have proven capable of is producing one-off out-of-this-world displays and we have to be wary of that. And like I have suggested earlier, their quality won't always be in the more, shall we say, "visible" aspects of the game.

There's plenty throughout their 23 capable of mixing things up with us and if we don't force them to play their way into our 22 rather than inviting them in through poor discipline, their side of the scoreboard could start moving alarmingly quickly.

All of that said, man for man on those teamsheets, I really do think Eddie Jones had it right.

UPDATE - news trickling through as I type that perhaps there is illness in the England squad with Itoje and possibly more involved, we'll have to see but I can't imagine it would change their approach much

In the Harpin WhatsApp group I typed this today...

"I reckon we can definitely take them in the last half hour, the trick is to still be in it at that stage. Be ready for a kitchen sink heading in our direction from kickoff"

...to which I got a reply "you talking about the match at Twickers or Kingspan?" and fair enough, it could apply to both!!!

And the bookies think Eddie had it right as well, although they are incredibly cautious giving us the narrowest margin of victory possible as I type. I'm going more confident - while I'm wary of what England can do on any given day I still have faith in this Irish set up right now and I say we can prevail by 4-7.

From about 4pm to 10pm the Irish ruggersphere is going to be absolutely mental, and like I said before there's also the Wolfpuppies trying to stay on course for a Grand Slam while all this is going on, best of luck to Richie Murphy's charges.

As always you'll find my two cents being offered on @HarpinOnRugby so be sure and have a follow and join in the discussion, then when the full time whistle blows, click your way over to our Facebook page and let us know what you thought. JLP