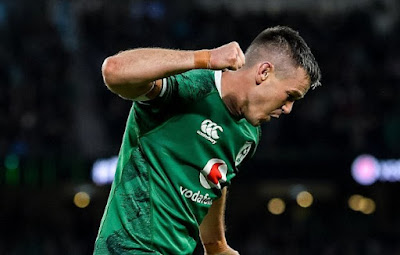 Johnny Sexton recently gave us some closure on his career and given he is our skipper who is set to hang up his boots after the 2023 Rugby World Cup in France, it means we now have a sense where this impressive squad is headed.
This has really helped me focus on the team itself rather than all the negative opinions expressed throughout the Irish ruggersphere. Truth be told the provincial BS has really been getting me down of late - of course it has always been there, but to see it when the team is actually playing well can really make you want to switch off social media altogether.
But running a site as I do, I guess that's not really an option, so now we know Johnny's plans, the opinions of those who keep knocking him don't really matter - if he's fit, he'll be starting for Ireland right the way up to the end of our campaign.
And it's that very end which has me changing my way of thinking...previously I had been obsessing about winning a quarterfinal when thinking of how we do in a World Cup, as if that itself would be an achievement. But then I look at this current crop of players and the results they have been able to get since rugby returned to some sense of post-COVID normality.
We can hardly expect Andy, Johnny & co to go to a World Cup with a view to just reaching the final four, can we? When asked for their objectives in France, the answer can only be one thing - "We want to win the World Cup". And that's the line. Sorry if you think that's stating the obvious, but it's an important distinction that I only made once Johnny's contract was announced.
I'm also sorry for the long ramble leading up to harping on what happened in the Aviva Stadium on Saturday evening, but for me it's important to put it all in proper context. Obviously I'm delighted with a bonus point win, obviously I'm even more delighted with a Triple Crown, but more than anything else my question is - what have we learned about this squad since November?
And for me the answer is that while last Autumn we showed we can play with a new style and make it work, over the past seven weeks the lesson was that even when we're not firing on all cylinders, we can make it work.
Remember - this was the year of a French squad which itself will go down in history as one that achieved the Grand Slam courtesy of some of the greatest players this competition has ever seen. Yet while the final table shows them to have won by a margin of four match points, we have to remember that they got an extra three for winning said Slam.
When it comes to points earned in individual matches, Ireland only fell short by just the one point. ONE. And that's while not hitting the top of our game over the 400 minutes. So if this team can reach those heights, who are we to bet against them learning enough to move on and go even higher.
Why not say we're going to New Zealand not just to maybe win once, but to actually win the series. Why not say we're going into next year's Six Nations not just to maybe retain our Triple Crown, but to actually win another Grand Slam. And why not say we're going to France in 2023 not just to maybe win one knockout game, but to actually send off one of our greatest ever players by giving him the sport's greatest trophy to lift.
So as I'm rewatching this match and writing it up, that's a sense of where my head is at.
0-20
After all the hype during the week about Ireland's trophy ambitions, you could hardly expect Gregor Townsend's men to do anything but come to Dublin with a determination not to just make up the numbers, and they definitely started the match the brighter.
Breaks from Darcy Graham after the kickoff and later Pierre Schoeman got them into our 22 more than once in that opening spell, but our defense was ready for them both times, and we were also able to give a demonstration of our own confidence when Jamison Gibson-Park fired a pinpoint miss pass across his own try line to help escape (albeit with the safety net of a scrum advantage).

Yet it was Scotland's confidence that was their own undoing after they chose not to go for a kickable penalty only to fluff their lines at the lineout in our 22. And it wasn't long until we had our first real chase to break ourselves as JGP had a snipe which got him deep into their half only he had no support although he might have done if Johnny Gray's clever little grab of JVDF's jersey had been spotted.
Now our tails were up and having owned the territory stats early on, the Scots were struggling to clear their lines and we kept pressing until a series of penalties led to Dan Sheehan throwing a 5m lineout to Iain Henderson before getting on the end of a maul going forward before peeling off and falling over the line to get us on our way.
In many ways this first quarter set the tone for the match as a whole - Scotland doing well to press us only to make a mistake at the crucial moment while we make the most of an opportunity down the other end, albeit eventually.
20-HT
The pattern continued as a Scottish attack was thwarted by a knockon yet when Ireland got down the other end our pressure was relentless and with Dan Sheehan continuing to impress with strong carries and accurate darts, we got more phases on the line until Cian Healy was the second Irish front rower to get it down. At 14-0 and the game not half an hour old, it really did look like the bonus point would be easily reached despite the slowish start.
Scotland then went to the air for the next couple of attacks only the accuracy wasnt there so after forcing a turnover at midfield they put together an impressive string of about a dozen phases before their own front row got in on the scoring. Pierre Schoeman's actions after being tackled needed a couple of looks but the TMO couldn't make Wayne change his mind and the try (rightly IMO) stood.
A Tadhg Furlong jackle won a penalty shortly after the kickoff and now it was our turn to give up an easy-ish three points to no avail as Grant Gilchrist made some mischief at the lineout to earn a scrum which more or less killed the half.

Not perfect by any means but we're a bit more accurate which is why we're ahead. Scots playing a simpler style and deserved their try and are defending well at times but they are making errors and we're not taking advantage. Sheehan impressing most for me so far. #IREvSCO

40-60
I don't get frustrated by Wayne Barnes as often as most Irish fans do but in this match where the breakdowns were so competitive he seemed to have problems throughout finding that line between a carrier's knee being on the ground and a tackler legally stripping the ball free, and while this affected both sides at times, it played a part in our not scoring early in the second half.
Then around the 47th minute we had arguably the game's two biggest talking points in the space of one series and from what I've seen in the Twitterverse my take on both of them very much goes against popular opinion.
Schoeman on Henderson
Pierre Schoeman is no stranger to shipping penalties and cards and on first look there is no question he makes contact with Iain Henderson's head in this challenge. But for this decision by Barnes, my opinion seemed to move almost exactly in sync with his.
For context we have to remember the Ewels v Ryan incident from seven days before. The issue, as I kept saying throughout the week, was that the tackles need to be lower. This is why we have these laws and guidelines as they are - they were called "zero tolerance" when they came out.
But it is also possible for the ball carrier to be responsible for a blow to the head, which is a big reason why Duhan van der Merwe wasn't playing at the Aviva on Saturday. So this action by Schoeman was definitely worth a look, and Barnes' starting point definitely seemed to be one where it could be a red card.
However...what was that we were saying about the tackler getting low? As much as I admire Iain Henderson, in this case I think he was in a bad tackle position. And when the pass to Schoeman was high, while considering the height difference between the players, him gathering the ball means his arms were going to be raised.
My point here is that if his arms aren't where they are, when the two players come together, Henderson could easily find himself in the same boat as Ewels. Does the prop extend his elbow a bit as the contact is made implying force? Definitely. For me, the mitigation brings it down from red into yellow/penalty only territory, but Barnes saw it as a natural action and explained his case well. Still, absolutely not a red card for me.
Did Hogg make a pig's ear of the finish?
Play went on after the collision, and with a bit of luck out wide, Hogg was able to kick the ball forward and gather with seemingly a clear shot to the line, and Sam Johnson in support. But he did not get the try, choosing against the pass inside and instead getting clobbered into touch by Hugo Keenan, who had yet another outing to deserve the "Mr Dependable" tag I gave him in my preview.