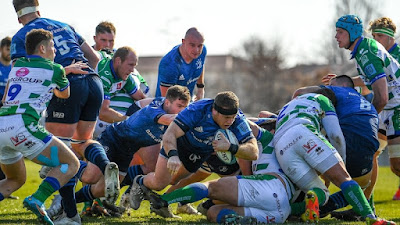 With all that's going on in the world, how can I be anything but happy with this match? In my preview I said I would have settled for a bonus point winning margin of 15-17 points where at least the defence was solid.

In the end we actually managed to match the previous weekend's margin when the test sides responsible for these two clubs missing a large portion of their squads squared off at the Aviva. Obviously the results don't exactly help put the debate over the future of Italaian rugby to rest, but since my remit here is to harp on the boys in blue, these 80 minutes were overwhelmingly positive.

While the attention of most would be drawn to the 61 on the scoreboard, I tend to be more impressed by the opposition's side. If anything since their total of 17 actually brought our average for the season up a smidge, we could be disappointed but like I already said, I'm all about the happy thoughts for this writeup.

Because not only did we concede our two tries through very fixable things like a missing pillar and a lineout dart that somehow managed to evade Devin Toner, they failed to breach our line until the 50th minute, which was the earliest we'd conceded since defeat in Cardiff five rounds ago, not to mention that we already had five tries in the bank ourselves at that point.

So especially considering that from here on in, our schedule can only be described as "the business end of the season", be prepared for the rest of this article to be pretty much full of unashamedly blue-goggled Leinster gushing. Well, even more so than usual, that is...

Lately I've been carving matches up into quarters but for this one I think I can afford to just do the tries...

What has to be extra frustrating for Benetton coach Marco Bortolami is that it was clear from the start that they had put extra work into defensive organisation to keep us out only to come up against a Leinster side that probably felt like they left a try or two behind against the Lions the previous weekend and had to put that right.

So when the booming left boot of Jamie Osborne had us into their territory not long after receiving the kickoff, we remained patient through a series of phases until Joe McCarthy, my player of the match with no disrespect to Ross Byrne, slipped a nice inside ball to Jimmy O'Brien to finally find a gap that got us into their 22.

Once there, a penalty advantage got us a lineout 5m out and after Ross Molony grabbed the dart, the rest of the forwards did the heavy lifting around the try line before Max Deegan got over for what must be at least his gagillionth try in this league.

For matches with big margins like this I feel bad calling any period of the game a "purple patch" for the losing team, but the fact remains that Benetton won the next 15 minutes or so 3-0 thanks to their defensive cordon getting some jackles in, plus they did spend a bit of time in our territory as well, only our own cordon was even better.

Eventually a seat belt tackle was the only way to stop Sean Cronin as he motored into their 22 which meant we had another lineout from 5m out, and almost as though he was determined to get something from this visit himself, the one they call "The Nugget" got on the end of a powerful maul that got him over the line for try number two.

It wasn't long before we were back in their 22 for a lineout yet again, a little further out than the earlier ones, so next off the menu of set plays one one to get the backs involved. Harry Byrne ran a perfect screen for his brother Ross to send it to Jordan Larmour and the timing went so smoothly that our right winger had enough space (between their 13 and 14 no less, hardly slouches) to fire up the jets and sprint home himself.

[UPDATE - just learned as I'm going over this article one last time that a hip injury has ruled Larmour out for the remainder of the Six Nations, a terrible blow for him hopefully he can at least return for Leinster this season, same goes for Harry Byrne who was replaced by Dave Kearney shortly after this try]

For once we didn't need a lineout to set us up, instead it was a super combination up the touchline involving Larmour as well as O'Briens Jimmy & Tommy that brought us from one 22 to the other. From there with Luke McGrath having improved his speed to the breakdowns considerably we managed to consolidate the front foot ball and with a couple of penalty advantages in the back pocket it was eventually Ross Byrne who broke through for the bonus point, and since he had also clicked all of the conversions at this point, we went into the "sheds" a more than decent 28-3 to the good.

Hard to complain with that half! Line speed at the usual levels, line out providing the platforms, both forwards and backs able to provide the finishes. Only downside obvs Harry, hope he's ok.#BENvLEI

Having been dominated at scrum time the previous week, it was good for this Leinster front row to put us in position with a couple of penalties in quick succession, particularly for tighthead Tom Clarkson. The sight of Sean Cronin peeling off a maul from the resulting lineout for try number five was far from surprising.

So Joe McCarthy impressed my greatly throughout this match for carrying, lineout takes and especially his handling skills out of the tackle, he looks like a real prospect.

And while I do want to stay positive I can't ignore the fact that between himself and 100-cap Peter Dooley they left the pillar at a breakdown unguarded giving the home crowd something to cheer about as young lock Piantella saw the chance to take himself all the way to the line.

I'm pretty sure Cullen, Lancaster & co would have expected an immediate response after that slip, and they definitely got it when a pinpoint grubber through from Jimmy O'Brien forced the home side to take it into touch giving us yet another lineout in an attacking position. And I'm sure there was a wry smile on Sean Cronin's face as James Tracy, who had just replaced him one shy of a hat-trick, got on the end of the ensuing maul to secure try number 6.

The 2021 Rainbow Cup Champions tried to respond in kind and spent the next while down at our end although we had the luxury of bringing on the likes of Dan Leavy from the bench and it wasn't long before he was burrowing his way into a breakdown for a penalty to clear the danger.

A collapsed maul from the lineout gave us another one well into their half, and with the home tacklers getting tired we kept turning the screw until a nice offload out of the tackle by Rhys Ruddock slipped Jimmy O'Brien through under the posts.

I saw some suggesting this was the try of the match yet while this is hardly an important debate, my vote went for number 4 as we brought it so far down the field and the link play JOB > TOB > JL was so smooth.

"You can't keep going offside like that. I'm aware of the score but..."

My only issue with Ben Whitehouse as a ref is that he talks too much but to be fair that's an almost impossible area for officials to get right because we often need them to be clear in their explanations.

I thought he had a really good game here overall (including a great spot in the first half when he spotted without the TMO that a "taken in the air" call should go the other way) but I think actually saying that he's taking the score into account didn't look good. In reality so many of Benetton's 14 penalties were in the red zone that they probably should have seen yellow at some point.

Anyway, from the lineout that came after the warning, it was straightforward for Leinster as once again there was a lineout, a maul and a James Tracy try. What definitely was NOT straightforward, however, was Ross Byrne's conversion which somehow managed to hit both uprights and the crossbar without dropping over, although I think we can forgive him having slotted all of the previous 7.

The key to Leinster's success today was the 17 successful lineouts, a majority of them as clean as a whistle. The exceptions to the rule both came from the hands of James Tracy, one which was crooked and the second was the one that sailed over Toner into the grateful arms of their openside Cannone and nothing about our defensive ability was going to stop him getting over.

FWIW there may have been a hint of luck about the last try, since after another series of powerful carries and offloads in their 22, the ball went to ground but was deemed to have gone backwards and eventually there was Jimmy O'Brien to get another and finish off a really satisfying day at the office for Leinster.

One last note on the defence - as well as the line speed there was a second try-saving tackle in as many weeks from Tommy O'Brien as he hunted down Rhyno Smith at the start of the second half. Very honourable mention must go to our bench as once again there was no drop in cohesion throughout, even with our centre partnership having to change before the break.

I wouldn't feel too badly about things if I were Benetton, we were in determined mood on this particular day and they are getting used to a new coach and definitely have the talent to get back, especially when their internationals return. Plus, had the URC schedule gone as originally planned, they would have been stronger for this match, not having had to face the Sharks a week before.

Conceding an average of less than 14 points per game is always going to put you up near the top of the table although our next opponents aren't far behind us in that category. Ulster will definitely start as favourites next weekend at the Kingspan, and with it kicking off shortly enough after the match at Twickenham, what a Saturday evening of top flight rugby it promises to be.

See? Even though we're to be underdogs I found a way to be positive. Told you nothing would phase me in this writeup!!!

Be sure and stay tuned to HarpinOnRugby.net for the remainder of the week, I'll have an Ulster fan on the pod to talk about both the Six Nations & URC as well as all the usual coverage of the weekend to come. JLP