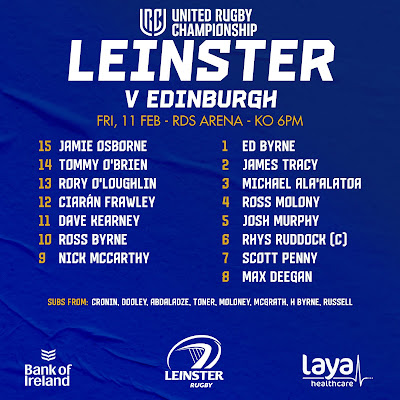 Before I harp on my thoughts for this top four clash in the URC, I can't ignore the really, really awkward kickoff time.
Obviously I know there are a lot of factors going into it, like the Christmas COVID postponements, the lack of free dates on account of the Six Nations, the demands of TV networks, etc, etc, but the fact remains that while I'm personally lucky to be able to get to and from the RDS relatively easily, that's not so for many many fans around the province for whom 6pm on a Friday just doesn't work, especially with just a couple of weeks' notice, so I hope that not too many season ticket holders in particular were put out.
Right - on to the match itself...there's no shortage of motivation for Leinster to get a good result here...you can take your pick from wanting to bounce back after what happened in Cardiff, the fact that if we win our games in hand we go back on top of the URC table, that this is one of three home matches in a row so we'll need all the points we can get with a lot of road trips to come, the desire to stay ahead of Munster, or even take all of them together.
It is most certainly an interesting selection that we have lining out. For one thing there's the switch of Jamie Osborne from 13, where it seemed we were determined to play him all season when internationals were away, to full back where he did so well for the Irish Under 20s last season. Another player to make a move since Cardiff Arms Park is Rory O'Loughlin, who goes to outside centre where he has played quite a bit over the years in matches like this one.
One who has remained in his role is Ciaran Frawley who will no doubt be keen to continue to provide creative support for Ross Byrne as well as keeping track of the defensive side of things. And at scrum half, although I thought Luke McGrath didn't have his best night at the Welsh capital, it is still a surprise to see Nick McCarthy getting the nod two weeks later.
But when it comes to the Leinster backline the standout name has to be that of Dave Kearney, who was in the form of his life before his injury and hopefully can quickly get back to it and this is a good stage for him to do just that. It's also good to see Tommy O'Brien starting again as he always gives 100% and this is a opportunity for him to get a decent run of games.
The pack has a more settled look to it although James Tracy had a good outing last time and has earned a start. Rhys Ruddock has the skipper's armband and will be keen to lead his backrow to return protection of ball-carriers to the standards we expect.
On the bench there is quite the (cliché alert) "blend of youth and experience" with Martin Moloney and Rob Russell with just 3 caps between them and Messrs Cronin and Toner having, well, a few more than that. But it will be Harry Byrne who will be looking for game time the most and I was actually surprised he wasn't slated to start.
When it comes to our visitors, I spoke to Sandy "@theburghwatch" Smith on the podcast during the week and he spoke of their impressive URC record to date under Mike Blair that includes 6 wins and 1 draw in 9 matches, although on their most recent outing they were disappointed to fall short to the Ospreys.
One leading light of that performance was a hat-trick from their starting loose head Boan Venter who has done well in the place of Pierre Schoeman and will be a threat on Friday from close situations. Also despite the absence of so many internationals they still have the likes of skipper Pyrgos and Puma Emiliano Bofelli to call on.
So we certainly can't expect to have things entirely our own way for this one but if our re-jigged back line combinations can click early on, we would hope to be able to dictate the tempo and give the bookies' spread of a 16-point winning margin a real run for its money.
This is one of those weeks where I'm going to put it up to the lads by saying we'll beat that margin, say 19-21pts, although it's going to take a lot of leadership around the park from more than just Ruddock to get it done. We really need to push for a maximum point haul which would certainly be a perfect start to a massive weekend of rugby.
As always you can follow me on twitter to get involved in the conversation throughout the match, then at the fulltime whistle head on over to the Facebook page and leave your thoughts. Safe travels to the RDS if you're going - hope to see you there!* JLP
* - UPDATE : unfortunately I pulled a muscle in my leg during the week (in sympathy with Johnny S I guess?) and this evening's match has come "a week too soon" as the saying goes so it's best I sit it out. Will still be watching of course!
Edinburgh Rugby: 15. Henry Immelman 14. Ramiro Moyano 13. Matt Currie 12. James Lang > VICE CAPTAIN 11. Emiliano Boffelli 10. Charlie Savala 9. Henry Pyrgos > CAPTAIN
1. Boan Venter 2. Adam McBurney > VICE CAPTAIN 3. Lee-Roy Atalifo 4. Marshall Sykes 5. Glen Young 6. Ben Muncaster 7. Connor Boyle 8. Mesulame Kunavula
Replacements: 16. Dave Cherry 17. Sam Grahamslaw 18. Jake Armstrong 19. Pierce Phillips 20. Kwagga van Niekirk 21. Charlie Shiel 22. Jaco van der Walt 23. Cammy Hutchison.
United Rugby Championship 2021/22 - Round 8*
Saturday, January 29, 2022
KO 7:35pm
RDS Arena
Referee: Adam Jones (WRU)
AR 1: Eoghan Cross (IRFU)
AR 2: Stuart Douglas (IRFU)
TMO: Olly Hodges (IRFU)
Live on: RTÉ 2, Premier Sports, SuperSport & URC TV.
*rescheduled
at February 10, 2022