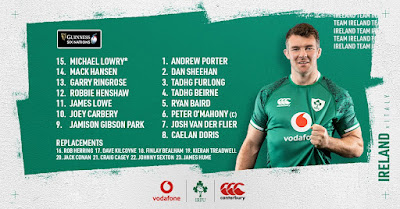 This is one of those previews that will have to evolve throughout the weekend. As Ireland are playing on Sunday my impression of how it will go is bound to be affected by what happens at Murrayfield when Scotland host France.

***UPDATE AFTER SCOvFRA : Maybe it was wishful thinking but I expected more resistance from the Scots, maybe denying France a try BP or at least getting closer margin-wise. Anyway, makes our challenge all the more difficult but we're still in this IMO***

Because it is very important to point out that despite the disappointment in Paris two weeks ago, as my heading from the writeup suggests, the bonus points earned in our opening two matches mean Andy Farrell's men are still very much in contention for the title.

Sitting third in the table may not look ideal at first until you factor in that the two nations above them, France and England, have both already played Italy yet we still find ourselves 3 points off first, in relative parity in tries for and against, and a "mere" 14-17 points shy of them in the points difference column.

All of which means that if this weekend's matches go to form, there's every chance that we'll be in a much stronger position heading to Twickenham in two week's time. But of course, there's the small matter of turning that "if" into reality so let's have a look at how we are set up to do that.

With James Lowe impressing last November before being injured going into the Six Nations allowing Mack Hansen to ably fill his boots, Lowe's impressive cameo against the Ospreys last week set up the possibility of a national debate over which one should hold the starting position.

Yet the Irish coaching ticket has, wisely I reckon, decided to "Carlsberg it" by going for option C, putting both on the pitch at kickoff, and with Michael Lowry thrown into the mix as well, it leaves us with arguably the most attacking looking back three we have fielded in the Six Nations for a long, long time.

Obviously they will have to be used properly by their 10, and after much speculation during the week that Sexton was set to start, instead the role has been handed to Joey Carbery who will no doubt benefit from a second match in a row pulling the strings, and with so many quality attacking options at his disposal (his centres aren't too shabby with the ball either) he has everything set up for him nicely.

Rónan Kelleher, James Ryan, Iain Henderson and Jack Conan would be big names to be removed from any starting pack yet their replacements represent such a (cliché alert) "blend of youth and experience" that I can't see ours being affected too much.

Yet while as always with this Irish team we will be relying a lot on set pieces, which as we all know includes restarts where we did so well in Paris, I have to push back against some of the scepticism surrounding Peter O'Mahony's inclusion. A bit like Sexton, I believe our team needs a certain level of experience and there is no doubt that he provides it and should the Azzurri opt for some "dark arts", there's no better man out there to keep on top of it.

I have to admit I was as surprised as anyone to see Sexton's name on the bench - conventional wisdom is such that this fixture is an opportunity to try other options and Jack Carty could certainly do with more than the 10 seconds(ish) of pitch time he seemed to get in Paris.

But we can't forget that playing out half is not Sexton's only role in the squad. He is also our test captain and I have to say despite my early reservations he does seem to be growing into the role, and to go without him in the 23 at all between round 1 and 4 of the tournament would be far from ideal so IMO there is a defence to be made for his inclusion. Plus, not a bad name to introduce for the final quarter if you're looking to pad your points difference column.

Elsewhere among the replacements it's good to see names like Herring, Treadwell, Casey and Hume involved - I know many are disappointed not to see Balacoune in the 23 and I'd be surprised if he was too far down the pecking order so further chances should come soon.

On the podcast during the week I spoke to the author of The Italian Rugby Blog about how their squad is set up for this match. Obviously results haven't exactly gone their way for a while but with not only a new coach but also a new Federation president, an objective observer would see that changes wouldn't happen overnight.

Although the results against France and England so far don't exactly scream of an improvement in defence, they are working to shore things up in this important department and you can be sure they'll be working hard to keep our side of the scoreline as low as possible throughout, with the likes of Garbisi and Ioane capable of taking advantage of any opportunities we might hand them.

I'm always wary of a points spread from the bookies of something like 40 but if we're going to say we're in the hunt for the title, we have to live with the tag of overwhelming favourites in matches like this. So I'm going to back the boys in green and say they will at least reach that high bar, especially if that exciting back three can get off to a confident star and who would bet against that trio.

GET INVOLVED IN THE DISCUSSION

As always you can follow us on Twitter throughout the match and at the full time whistle pop over to the Facebook page and add your few cents where there's always a good range of opinion, we post as many as we can in a post the following day.

Of course we can't go without mentioning the excellent Under 20s who are still unbeaten after putting away a far from easy Italian side in Cork on Friday. As is the custom on these pages, I was refrain from actually typing the phrase that rhymes with "canned ham" until it's appropriate, but they've been really impressive so far and surely must serve as inspiration for the senior side. JLP