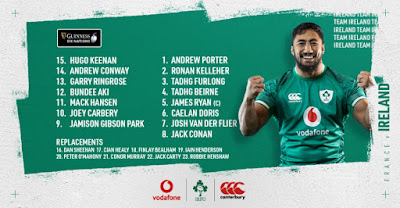 "We're just after beating the All Blacks" is a badge which, once earned, you normally get to show off to your next opponents for a while, yet it after enjoying it against both Argentina and Wales, it won't make much of a fashion statement in Paris this Saturday.

But whatever way you choose to look at this match, through a short term lens as a possible decider of the 2022 Guinness Six Nations Championship, or a long term one like how it's a big step on the road to preparing this squad for a return to French soil in 2023, all the recent evidence points to Ireland being able to meet this challenge head on.

"Eh...what about the absence of Johnny Sexton?" some might say. Two points to harp on there. One is that no team can afford to completely rely on any one player being available, even one with a success rate like Irish skipper has. You don't get an asterisk beside your team's names in the history books because of those who weren't there.

But more importantly for this fixture in particular, are we really sure that Sexton's influence won't be there on the pitch with the boys in green? Let's just say he doesn't strike me as one who is going to fade into the background throughout the build up or indeed the 80 minutes itself.

Still, we must do without him on the pitch and stepping into his shoes is one Mr Joey Carbery. For the record, if it were down to me I might have tried to find a way to get Jack Carty starting as replacement, were it not for the horrible message that would send to the Munster outhalf. My reasons would be purely tactical in that the Connacht man's game would be more suited to following the original play book.

But that said, Joey did do well as playmaker against the Pumas and also proved a wise selection as an alternative for Hugo Keenan at 15, allowing our selectors some flexibility to go for carrying strength rather than speed for the important 23 jersey. So with clearly the full backing of a increasingly successful Irish coaching team, I don't see why fans shouldn't be equally optimistic about his chances.

And when you look at the team in its entirety, that he is the only starting change from last weekend is probably the most important takeaway from the team sheet. Key units like centres all throughout the pack are rightly rewarded by staying together and there's plenty of proven talent to make things a lot easier for our 10.

For me, there's only one way to look at this match and that is defensively. Both have proven to be strong with the ball in their own way, France with their usual knack for making the most out of transition but also with a strong pack, and Ireland with this new approach complete with offloading and Jamison Gibson Park keeping a high tempo going.

But for that to work they must get through the significant respective blue and green coloured walls that will be set before them and it is here where the match will be won IMO. Like any cup final or potential Championship decider, every tackle has to be made and every gap has to be covered as mistakes will be punished in full,

Speaking of punishment, it will do our chances no harm at all to avoid shipping penalties until the second half same as last weekend, though this is unlikely as I doubt we'll be winning the vast majority of collisions as we did against the Welsh. We can still benefit from good discipline once we try to get ourselves on the right side of Angus Gardner.

This of course speaks to another key Sexton replacement, with James Ryan assuming the captain's duties. I thought he did extremely well last week, if quietly so and I even wondered if that kind of "under the radar" display was one that suited him. Well that theory will most certainly be put to the test on Saturday as he'll have to be front and centre making sure our case is made when needs be.

Finally we have our bench. I see our hosts have gone for a "6/2 split", although you could say we have too, with Robbie Henshaw's introduction being very similar to bringing on an extra forward; what a timely return to action for both himself and of course Iain Henderson and they will be greatly needed. All due respect of course to Messrs Baird and Hume whom they replace - both will definitely be involved in the 23 again before long.

On the French side of things, while there are indeed several names for us to concern ourselves with, there are none we should fear, if we are to continue the vein of form we are in. Of course we should be wary of the likes of Dupont, Ntamack, last week's hat-trick hero Villière and also the power in their pack, not to mention the Stade de France crowd from their chest-thumping rendition of La Marseillaise to the full 80 minutes of partisan shouting and roaring.

But if our goal is to compete for this title, then get another win or two against the All Blacks in June, and bring those kind of results right the way through to finally ending that World Cup hoodoo, this is the kind of stage where we need to get a result. And apparently Sexton's omission only persuaded the bookies to push out their spread from a 3 point home win to 5 so it's all to play for.

How could I not be confident? We have the talent, the game plan, the strong defensive structure, and the belief throughout the set up. It might be a completely heart over head call here but I'm going to say we'll do it, even if we have to leave everything plus another 20% more on the Parisian field to get it done. It pretty much goes without saying we'd all gladly take a 1-pt win if offered now, but I'm going to say 3-5 points thanks to a strong defensive showing from our bench.

Whatever happens it promises to be a cracker. Bon voyage to all travelling, and as always I will be harping throughout the match on twitter and when the full time whistle blows I hope you'll head on over to our Facebook page and leave your thoughts.

Best wishes to Richie Murphy's Under 20s as well on Friday, here's to another big weekend of success for Irish rugby! JLP