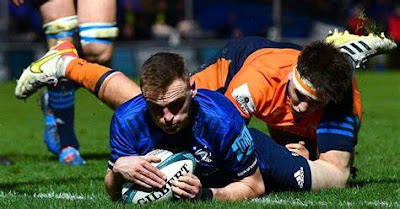 BIT OF A STRETCH

Really couldve done with 3 pts at the end there IMO. We've done well to get two tries on the board but our front foot ball seems slow overall. Defending our strong point, new boy Moloney doing well. Edinburgh still well in this. #LEIvEDI

40-60
The good news for Leinster in the spell after halftime was that our defence was able to resist an even longer Edinburgh siege in our 22 that lasted over 10 minutes. Maybe we were lucky that our penalties didn't at least bring us to a warning, but we made the most of that luck and forced them into bad decisions like when their full back Immelman looked like he could have taken it to the line himself but instead fired an extra pass that went into touch.
From that error we managed an excellent set piece which allowed Jamie Osborne to plant a booming kick towards the halfway line which cleared the danger.
However the bad news for Leinster in this time is that we were still unable to keep attacking moves going. Right at the start of the half we got jackled at halfway, later Connor Boyle stripped one free in the same spot, and a strong run up the middle by Rory O'Loughlin got us to the 22 only for a mixup with Luke McGrath forcing a knock on..
Then as Edinburgh cleared their lines there was a nasty collision between Osborne and Tommy O'Brien, one which left the latter badly shaken. I really don't intend to speak ahead of the medics in situ, but I personally thought it was bad optics for him not to have gone off for an HIA after the collision. Perhaps he was winded rather than struck in the head but that could have been made clear.
Anyway the bottom line is our failure to get try number 3 in this quarter when we emptied the rest of our bench meant it would be all the more difficult for us to go for that all important bonus point.
60-FT
Eventually we got our own chance to spend time in the opposition 22 when our scrum won a penalty at midfield. From the lineout we won another pen from the maul to get us even closer, and from there our forwards did their thing with the carries at the line until Vakh Abdelaze went over (although on the replay it looks like Moloney might have gotten it down a phase or two earlier). Ross Byrne missed this conversion but that wasn't important as we had to push for the fourth.
Well shortly after the restart we attacked straight from a scrum this time as Rory O'Loughlin surged into Edinburgh territory ably backed up by several team mates including Sean Cronin who got us deep into the 22. From there we quickly swept it out wide towards the Anglesea Stand where it got to Max Deegan.
Here I thought he was in an opposite situation to Immelman's earlier. This time he had the man free outside him yet chose to go himself when shipping it was probably the better option. I mean, a bit like Scott Penny, Deegan does have something of a knack for getting on the scoresheet in matches like this, but here I really do think he got one by the officials. 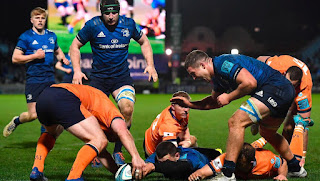 As my title suggests, to call this a try is "a bit of a stretch" as it really does look like a double movement when he seems to have time for a cup of tea before reaching out and placing it on the line.
Yet the try was allowed and the crucial fifth point was in the bag. Maybe this led to an air of complacency in our defending at this point, although it could also have been Mike Blair's surely-much-too-late introduction of Jaco van der Walt that led to Edinburgh's consolation as the outhalf found the perfect final ball which beat Tommy O'Brien who had strayed off his wing and went right to Bofelli who turned on the gas and powered over the line.
That was to be it for the scoring, with the Player of the Match award going to Scott Penny, although I might have gone for one from Moloney with an e for an impressive display especially considering the late change, or Molony without the e for assuming the captain's role, doing his usual hard work around the pitch and at lineouts, and possibly getting away with a fair amount of "dark arts" as well into the bargain.
HARPIN POINTS
Not much to summarize here only that while we definitely deserved to win because our try line defense was far superior to theirs, we really should treasure that bonus point because whatever the rugby gods had against us in Cardiff, they most certainly looked keen to make amends here.
But we must look ahead to the two further home matches to come because it will be equally important to take maximum points there too, especially given the bulk of our remaining matches after that will be away from D4. Ospreys are up next, and on the podcast during the week I will have a panel of fellow fans who will be harping on the Six Nations of course but also the road ahead for the boys in blue. JLP 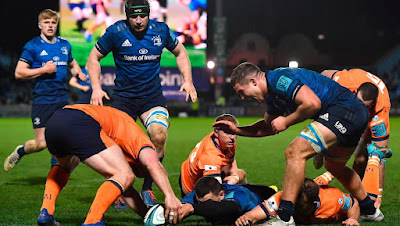 ********************
We normally do a separate post featuring online comments from the full time whistle but with the Six Nations also this weekend we'll add a few here instead - many thanks to all who contributed as always!

Scoreline not remotely reflective of the game as a whole. Edinburgh will be kicking themselves they didn't get more from that. Plenty of stuff to work on for us but a very important win.#LEIvEDI

Very fortunate to get the bonus point in the end. It must have been windy enough in the RDS as some of the handling, forward passes, not straight throws didn’t help the fluidity of a very stop start game. #LEIvEDI

Richard Mifsud I’ll start with the positives. We got a BPW. Given how largely disjointed our performance (does not extend to our D) was, that was, in and of itself a huge positive. Basically we found a way. Our D on the other hand was awesome and that created the platform for our win. Individually I thought Penny Deegan and young Molony played well. For the remainder nothing spectacular TBH. Gutted Frawley left early but the Byrne and Byrne combo looked intriguing when it clicked. Will we see it again? In sum another turgid outing and we definitely need to improve considerably if we’re going to lay a good platform for when the international lads return #COYBIB

26-7 at the RDS. Kinda suprise bonus point, but I'll happily take it. #LEIvEDI

Scrappy with a rub of the green but to still get the BP win when you play like that with lots of disruptions, we’ll take it #LEIvEDI @leinsterrugby 👏🏼

Conor Cronin A BP win. Can't complain about that. If we get in to the nittty gritty there will of course be problems but let's take the result, and build from there. This is our team for the next few weeks, let's see what they can produce and how they build on this result

Really harsh scoreline, lots of positives in this. Left a fair few points out there at key points start of each half. Leinster just aren't that generous.
Good lesson for a few, put them in a stronger place for next time.
Need to get Boff in game more, the lad is quite something pic.twitter.com/EWrNxRMGKA

Kevin OCeallaigh Great to get the bonus point. The Leinster lack of fluidity in attack was reflective of a team that hasn’t played together. However the Leinster defensive effort at the start of both halves was outstanding. I thought the yellow card against Edinburgh was harsh and it gave Leinster the momentum to get ahead in the scoring. I don’t think the final result reflected the Edinburgh performance. They caused Leinster some real problems.

Just finished catching up on the #LEIvEDI. We didn't deserve much out of it but the ref had a shocker frankly. That 4th "try" for a start. And he was standing right over it as it rolled around the turf!

Had to watch Edinburgh v Leinster on a bit of a delay so just finished it. Home side just too clinical at both ends of the pitch. Well done to the guys for keeping going right to the end. I'll bite my tongue about our players who are spending the weekend twiddling their thumbs.

Noel Hewson They won and let’s leave it there

Scoreline progressed similar to IREvWAL but otherwise a very very different match. Ire left scores behind but Leinster should be delighted with BP after that. Deserved win but only our strong D stopped it being closer. Backs not quite clicking, Penny worthy PotM #LEIvEDI