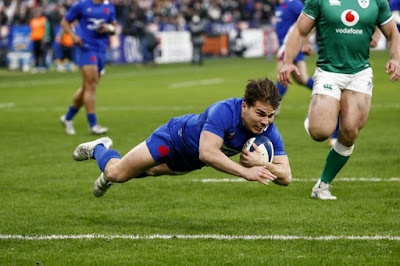 STILL IN THE HUNT

France got the jump on us with that quick throw in 1st minute and been a step ahead of us ever since. Defence has been good since the try but starting to creak. Great Mack try but hard to see where next one will come from. Not totally out of this but must strike soon #FRAvIRE

40-60
We started the second half still struggling to cope with the Shaun Edwards-inspired line speed, with apparently the only option being going high over the top (little chip into the space behind possibly a risk too far?) and when JGP and Conway got their timing wrong leading to the latter being offside, Jaminet was able to smash over a long range effort to give the home side what turned out to be a very handy 15-point cushion.
If it wasn't for the earlier bit of Mack magic, I'd have said what happened next for Ireland was the most straightforward try possible off a restart at this level. Andrew Porter jackled a trademark penalty before the French could exit, giving us our first opportunity for a lineout 5m out, and when Josh van der Flier peeled off the maul to fall over the line moments after the dart, all of sudden we knew we were able to hurt them after all.
This put a pep in our step and Carbery proceeded to lead us right the way back up the pitch from the next restart, and this time Villiere's attempt to recreate his earlier jackle went the other way allowing us to put another kick into the 22. Our lineout execution was a bit sloppy here again, but a strong Furlong carry soon got us back on track.
And as if to show Dupont wasn't the only pesky 9 on the pitch that day, Gibson-Park spotted that the towering Willemse was facing him as he took it from a breakdown and he proceeded to easily nip past him giving him a clear path to the line. Hey presto we had whittled that lead all the way back down to just the 1.
That kind of red zone opportunism is why JGP is in the team, but unfortunately his box kicking yips struck again after the restart and Mack Hansen could only knock it on into touch outside the 22. From the scrum they proceeded to work their way into our 22 with the help of some mercurial footwork from Penaud, although our defending once more seemed to stand up to the danger.
Pity our exiting and ball protection at the breakdown still had issues however, for as we tried to set up a clearance a stray boot at the breakdown seemed to send it back to the French side and this was the kind of transition situation they revel in, with prop Cyril Baille applying an excellent finish moments later.
Still though, we were left with a sliver of hope as Jaminet proved he was human by pushing the conversion wide leaving us within a converted try going into the final quarter.
60-FT 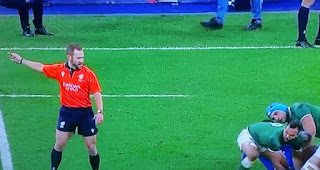