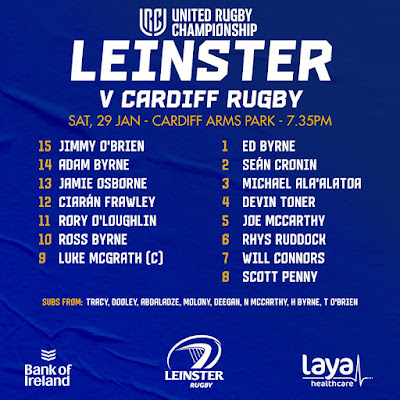 Adam Byrne, Rory O’Loughlin, Ross Byrne, Luke McGrath, Peter Dooley, James Tracy, Ross Molony, Rhys Ruddock, Ed Byrne & Max Deegan.  What do these 10 Leinster players have in common in relation to Cardiff?  The answer can be found down at the bottom of this article.

So we’re back with URC action and after two weeks of comfortable victories, this definitely promises to be a good challenge for us to start what is definitely an important block of games over the Six Nations period.

In case you missed it, our scheduled home match against Edinburgh for the final round in May has been brought forward to February 11 (at a horribly awkward kickoff time of 6pm on a Friday) and this could potentially be a “top of the table” clash, although of course we’ll need points both this week and next against the Lions if we’re to stay in that lofty position.

Before that trip to Montpellier was infamously cancelled we did name a matchday 23 and I had a feeling that our lineup for Cardiff might be somewhere close to that.  One unit which is identical is the centre and it’s a fascinating pairing with Ciarán Frawley at 12 and Jamie Osborne at 13.

With Frawley having come into the senior squad as a 10, and Osborne having acquitted himself really well at Irish U20 level at full back, plus the fact that two out of this lineup JOB & ROL have played 13 before (three if you count Ross Byrne’s cameo against Ulster), it seems clear that our coaching ticket sees this duo as one that have a big role to play for us in the future.

And as I always say about centres these days, the biggest challenge will be in defence so with Cardiff bound to test them both on first strike ball, they will have to be at their best to keep them out.

Frawley will of course also be called upon for his footballing skills at 12, with Jimmy O’Brien likely to have more freedom in this area too having shifted to full-back from the wing - obviously he feels he needs a break from scoring all those tries at the Rec!

Our halfpack pairing sees Luke McGrath and Ross Byrne together again - both will be keen to impress for future European dates and neither can be ruled out of the test picture either.  With Adam Byrne and Rory’ O’Loughlin completing the back line, it makes for a strong one although not one that has played a whole lot of rugby together recently.

There’s a more settled look in the pack, although there is a Leinster debut for young Joe McCarthy, who by all accounts has impressed for Trinity this season and will have the experience of Devin Toner alongside him, he’s got plenty of appearances under his belt for the both of them!

In the front row it’s great to see Seán Cronin back in action, as always we will need our lineout to function and his trademark strong carrying game wouldn’t go amiss much either.

Meanwhile in the back row, well having been spoiled for the past couple of weeks with what can only be described as our “elite trio” of Doris, JVDF and Conan, we have to “settle” for Messrs Ruddock, Connors and Penny this time around, what a pity, that 😜.  Awesome in particular to have Will back playing and you can rule him out of Six Nations involvement this season at your peril.

The bench is tending towards the young side, while it would do Harry Byrne good personally to have to deal with a tough situation in the final quarter we could definitely do without it.  As I always say about our replacements, once they can join the fray without us losing and defensive integrity I’d always back us.

As for the home side, well I had Cardiff fan Dan Pearce on the podcast during the week and he said Dai Young has them trying to play more through their backs and with Jarrod Evans pulling the strings and the likes of Ray Lee-lo and Hallam Amos at their disposal, we are bound to be tested.

But he also suggested they might be vulnerable to a team that can impose themselves by trying to play a pack-based game, so assuming Leo Stu and co have done their homework this could be the way to go for us.

The bookies have us winning by 15, obviously I’d take that all day long but to be honest I’d be quite happy if it were closer once we finished on top.  I’m hoping our young lads do well on debut but in front of a home crowd I’d expect the home side to take it to us and there could be opportunities for them.  So for my prediction I think I’ll go for us winning by about 7-9 though if we settle early it could be more.

As always be sure to follow us on twitter throughout the match and then at the full time whistle head on over to the Facebook page and leave your thoughts.  JLP