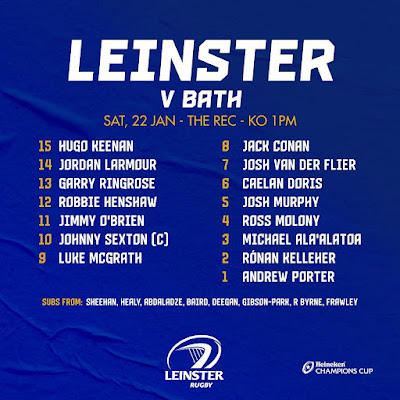 Before I harp on Saturday’s match at the Rec, I’d like to share the great work of regular contributor Cian “@RugbyKino” O’Muilleoir, which is a spreadsheet that helps you calculate the composition of the Champions Cup last 16 in real time throughout the weekend.  Follow this link, then the instructions you see, to have it at your disposal.

Kino was a guest on the podcast along with Tom “@LeinsterRoyalty” Coleman during the week as we did our best to drag some talking points out of that narrow win over Montpellier last weekend.  In actual fact we did find quite a bit to keep us going as despite the Top 14 outfit’s indifference there were several impressive performances on our side of the equation.

Now that we’re playing rugby again and statements have been made, while it would be pushing it to expect a similar margin, in many ways we still need to find a way to crank up the intensity as the squad heads into what looking like a busy part of the season.

All the advantages that the new URC format tried to get us with fewer rounds have gone out the window thanks to Christmas postponements and with our trip to Belfast set for March the 12 and one to Thomond still to squeeze in somewhere, we’re set for a stern test pretty much every weekend for the rest of the campaign.

Which makes it all the better that for the second week in a row we have been able to name a squad packed with regular starters, albeit with a few changes, with obviously the stand out one being Johnny Sexton’s return to the number 10 jersey.

It’s not often you’d see him anywhere near a Leinster lineup this close to a Six Nations campaign but it goes without saying that he needs some game time and this match could be a perfect chance to get it.  And with Luke McGrath in competition for a starting spot  having such a talented and motivated half-back pairing is a pretty good starting point for us.

Elsewhere in the backs there’s another elite returnee in Robbie Henshaw who resumes his centre partnership with Garry Ringrose.  If they are able to hit their straps from the off, particularly defensively, it could be a long afternoon for Bath in front of their home crowd.

After Jordan Larmour was taken off at halftime last week it’s good to see the same back three together.  And while his first half stint was impressive against Montpellier, Jimmy O’Brien on the other wing was also heavily involved in a lot of the play and has earned a second start.

In the pack, there’s another key unchanged trio in our back row.  Josh van der Flier earned his 10,000th match gong last week and who’s to say he won’t earn another, although it’s more about the combined impact himself Caelan and Jack bring to the table, a fact that won’t be lost on Andy Farrell either I’m sure.

The engine room also remains the same as that which started last week - Josh Murphy put in a really good shift considering he was brought on late for James Ryan and Ross Molony is sure to continue his strong “workhorse” role for us.

It will come as no surprise to see Tadhg Furlong being rested despite being declared available during the week - besides with a busy URC schedule ahead it will do Messrs Ala’alatoa and Abdalaze good to get some minutes in here.

On the bench there is much strength, with Dan Sheehan likely to find his way on to the scoresheet whatever time he gets introduced, and Ryan Baird getting the chance to join him on a rampage or three.  The reserve backs of Gibson-Park, Ross Byrne and Frawley will all make an impact too if required if last week was anything to go by.

As for our hosts, well obviously I was happy to see they broke their duck since their visit to the Aviva, but also it has to be said we’d be disappointed if they got another win here, even though they are at home.  They do have players that can impress, like Orlando Bailey at 10 and I’m sure Sam Underhill might feel the need to make a point, but if we play to our strengths we should have enough to get the job done.

The bookies have us winning by 28 points, ironic as that scoreline was not only awarded against us but is also coming into play this weekend elsewhere.  Obviously we shouldn’t feel the pressure to run in as many as 13 tries again, but that said, we definitely can’t settle for less than the full 5 match points.

I’m going to take last week’s form plus this week’s additions and say we will achieve that objective and maybe even beat the bookies’ margin by a few points at very least.

As always be sure to follow us on Twitter throughout the match and at the full time whistle, head on over to our Facebook page and leave your thoughts, we share the best ones on the site.

Finally bon voyage to all those travelling to the Rec for the match, it’s great to see that great tradition back in play again, long may it continue!   Also best wishes to the other provinces, just how awesome would it be to have all four proud provinces in the knockouts!  JLP