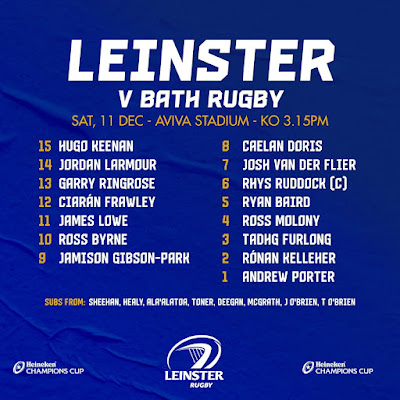 It annoys me when people define social media by the angry morons, because those types were there long before humans were scribbling on cave walls let alone posting on the internet.

But it REALLY annoys me when someone actually seeks out those same angry morons, which is what I have to assume Luke Fitzgerald was doing with his midweek soundbite.  I won’t link to it if you don’t mind, let’s just say he played right into the “Leinster fans think they’re better than everyone” narrative which I’ve done my best to pretend isn’t there for the past decade or so.

It’s one thing when people who are Leinster “forever haters” keep it going, but when a former player only goes and offers up “confirmation” on a plate, well, I want to keep this preview polite so all I’ll say is, it doesn’t help.  My language may have been a tad more colourful when I first saw the headline.

Anyway, going into this 2021/22 campaign, it’s fair to say the vast majority of Leinster fans are anything but complacent, with good reason seeing the similarities in how our campaigns ended in each of the seasons since the 2018 success.  If we don’t set out with a “nothing is won until it’s won” approach after the way things went against Sarries & La Rochelle, that fifth star will remain but a dream.

When it comes to our opening match this Saturday, everything clearly points to a comfortable Leinster victory.  Form, punditry and even the opinion of a dyed-in-the-wool Bath fan like Matt “@BathBytes” Price who was on the podcast during the week.

From extensive injuries to defensive frailties to boardroom inadequacies, Bath are a far cry from the team that scrummed us deep into the turf at the Rec six years ago and with 0 wins from their 9 Premiership matches this season, a Champions Cup slate of fixtures is probably the last thing they need right now.

But does this mean we should be complacent?  Take things easy and just assume that showing up will get us a win?  Well obviously that should never be the case anyway, but if you're looking for something to serve as motivation, check this out…

“If two or more clubs in the same pool are equal on match points, their ranking will be determined as follows:

(i) the best aggregate points difference from the pool stage”

Assuming COVID doesn’t wreak havoc on this new and unusual Champions Cup format this season (fingers crossed the three Leinster players are OK and there is no further news), we’re going to have to make the most of every opportunity to assure a high seeding in the knockout stages.  And the chances are that we won’t be playing the teams around us at the top so even if we could assume four wins against Bath and Montpellier, we’d have to keep an eye on bonus points and points difference.

All of this makes perfect sense of the strong starting lineup we’re sending out on Saturday afternoon.  Obviously it could be a tad stronger with the likes of Sexton Ryan and Henshaw, but it’s still clear that it’s merely unavailability that’s keeping them out for now.  And it’s not like their replacements are too shabby either.

I’m happiest for Ross Molony in this XV.  I spoke earlier about a past defeat at Bath but in the return match at the RDS when Leo chose to field some up and coming talent, Ross took man of the match and would be a strong contender for our player of the season so far, so his place as senior lock is more than warranted here.

The next name I’m happy to see getting a European start is Ciarán Frawley.  I think we can all agree he would be good at 10, but for now Leinster need him at 12, so what say we let him get on with it?  This is a great opportunity to work on the defensive side of his game and having the newly re-signed Ringrose beside him will help him greatly.

But it’s also good to see some settled units in the squad, especially both front row and back.  Hard to believe it is over ten years since Rhys Ruddock first captained Leinster so he’ll clearly be no stranger to the role and meanwhile Josh and Caelan alongside him will be tearing up trees fighting for another Player of the Match gong (oops, now I’m the one straying towards complacency…).

In the front row I want to see another series of confident darts from Messrs Kelleher and Sheehan from start to finish and along with Molony and Ruddock as perfect targets is another known tree-tearer in Ryan Baird, with Big Dev on the bench known for winning a lineout or two in his day.

Bath have come with some young promise of their own, with fly half Orlando Bailey apparently something of a prospect, and with Ben Spencer and Joe Simpson as their 9s he’ll have plenty of experience.  But back on our side we have the return to action of Jamison Gibson Park to help Ross Byrne keep up the tempo and get the most out of the pace and talent in our backline.

So the bookies have us winning by over 30.  I want to say we should be able to hit 40 or more without sounding like I’m “doing a Luke Fitz”, but I really do think we should be aiming to get the maximum return on all the pre-match expectation, and besides, with the weather not expected to be perfect they really should turn on a show for the crowd from start to finish.

Obviously no matter how heavily fancied a team may be, there have to be caveats.  An early sending off is always a possibility that could level things so we can’t take anything for granted.  But hopefully all will go to form and the Leinster fans will have plenty of scores to cheer about, with hopefully no further strain on the personnel front given the six day turnaround before the trip to Montpellier.

I’ll see you there if you’re going and as always follow me on Twitter throughout the match then head on over to the Facebook page at the full time whistle and leave your thoughts.  Also best wishes to the other provinces, here’s to a clean sweep!!!  JLP