ASTERISKS AND THE OMICRON

So here I am, staring at my laptop at the time I had set aside to write my preview for Montpellier v Leinster. For the record, I was going to predict a Leinster win, but only a hard earned one after the Top 14 team had spent 80 minutes giving it to Paul Willemse to run at our young centre pairing..

But instead the match has a result already, albeit one with an asterisk that has to do a hell of a lot of work, so I guess I may as well do a "match writeup" now instead and give myself the Sunday night off from harping on rugby.

Obviously I'm not a happy camper. And when I see tweets which imply that Leinster "outrage" means we wanted the match to go ahead whether there were COVID cases or not, I get even angrier. But I reckon I've done pretty well to avoid getting sucked into an online rabbit hole on this; nothing will change the official result so I decided to keep all my comebacks, try to put them in this article and consider that to be closure on the matter,

And it's not like this is even the most significant news of the week - the big stories have been coming thick and fast. Obviously the biggest one was the amazing stance by the 62 current and former Irish internationals who went to the government over the lack of transparency by the IRFU when it comes to internal reviews, pressure which seems to have worked. I know we've still to wait for proof of the pudding, and now they have taken a step in the right direction hopefully they'll keep going. We'll see what the review says when it's released in the first quarter of 2022 (subject to completion). 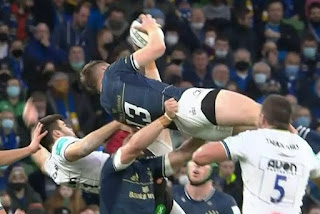 There has been loads of other things going on this week, but something else that stood out was the citing and eventual banning of Bath winger Will Muir for a challenge on Josh van der Flier at the Aviva Stadium last Saturday. I spotted it on my rewatch but chose not to mention it in the writeup as nobody else seemed to be talking about it and Josh played on but I guess the Leinster coaching staff thought it was serious enough for a citing and the commission agreed. I really thought it was a curious way to get leverage for jumping and it even looked like he went at the player twice. Anyway, that has been resolved.

So...to this match that never was...much has been said about it but for me only three statements actually matter. First there's the original COVID rules as laid out by the EPCR ahead of the competition...

...next there is the statement from the EPCR explaining how the came to their decision to award the 28-0 walkover... 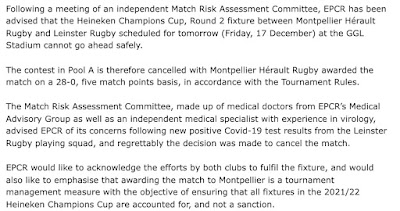 ...and finally, we have the reaction from Leinster Rugby explaining their side of things... 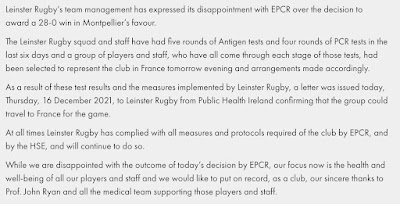 Now since all of that there has been further developments with other matches being "postponed" as opposed to being "cancelled with a 28-0 scoreline awarded" and obviously that doesn't exactly seem fair, but my interest is more in the decision surrounding this particular match, which was announced on Thursday.
Simply put, the original wording appears way too vague.  I'm assuming the teams themselves were given a broader text to explain what was required but if so, Leinster claim to have done this.  I guess what I'm trying to say is that we do have a legitimate reason to be annoyed even without Friday's news, but since the club has come to accept it, then we might as well too.
I mean behind it all, even if the EPCR didn't properly dot the t's and cross the i's** when coming up with the rules, I still think such organisations should get a lot of leeway in this area because of the sheer "WTF-ness" of the whole COVID situation.  The pandemic goalposts keep getting moved on a near-daily basis so it's not just sporting types which have to handle it.  So what happens, happens and of course we all hope above everything else that all who tested positive are actually ok.
On the other matches being rescheduled, well I'm hardly over the moon, though it seems they are making a distinction over who is to "blame" for the match not being played.  In Leinster's case, the independent committee decided that the increasing number of cases in our squad meant it was unsafe to travel, which when you think of it makes sense because even though the matchday 23 would have left with negative tests, it was possible they had been in contact with the positives.  For the matches postponed on Friday, it was down to a government decision.
However, one thing I would question over the possibility of rescheduling the matches is this...wasn't the whole reason for the "28-0" ruling in the first place that there was no room on the calendar if a match couldn't be played?
Anyway - the result seems to be on the books and we just have to live with it.  And rather than get too caught up in what has happened over the past couple of days, maybe we should be thinking about the rugby which is due to take place over the next couple of months.  Some big interprovincials over Christmas and New Year followed by the "return" Champions Cup pool matches, and then of course the Six Nations.
I guess getting all of those matches played under safe conditions would be the best result we could hope for.
Here at Harpin Manor we'll be taking a few days off over the weekend, with a podcast "Christmas Special" to record next Tuesday so stay tuned for news of that.  Right now I'm looking forward to cheering on the Ulstermen as they take on Northampton later on this evening, hopefully nothing else happens to get in the way of those plans!!! JLP
PS - click here to see the comments left on the Harpin Facebook page after the news broke on Thursday evening
PPS - UPDATE SAT DEC 18 : "Leinster set to appeal for cancelled Montpellier game to be rescheduled" - this story has more twists and turns than a Formula 1 circuit!!!
** = just to be clear these are in the wrong order on purpose, just for fun
HARPIN' ON RUGBY MATCH WRITEUPS
ARE BROUGHT TO YOU BY
THE IRISH RUGBY STORE AT ELVERYS