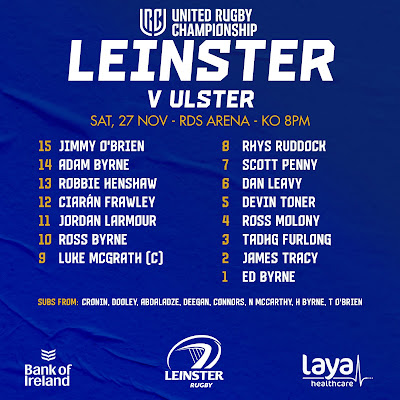 When you’re a Leinster & Ireland Rugby fan and the only real negative match from the 8 played by the two combined so far this season was one where your team still actually won, you know things are going well.

That doesn’t prevent you from being anxious about what lies ahead, and what better way for the boys in blue to resume their URC campaign than with a table-topping clash with our old friends from up the M1.

Personally, for what that’s worth, I’m not wild about the Saturday 8pm kickoff time, plus the weather doesn’t look like it will be too “clement” this weekend, and also for the league as a whole the news isn’t too good as COVID seems to have struck yet again.

But none of that will matter once things get underway down at the RDS as Leinster embark on a crucial series of matches which should go a long way to decide the outcome of the URC Irish Shield as well as our progress towards that fifth star.

Obviously with Andy Farrell sticking to the same lineup as much as possible throughout November, we couldn’t expect to see too many names included for this weekend, but with Tadhg Furlong having finally signed on the dotted line and Robbie Henshaw having finally returned to action, it is great to see their names on the team sheet.

And throughout the 23 there is a heavy “returning from injury” theme to the selection.  Dan Leavy must surely be close to getting back to test match readiness, while Scott Penny has also had issues earlier in the calendar year.  Then on the bench there is Abdeladze, Deegan and also another test candidate Will Connors returning to action.

Overall the starting XV seems to have a great mix and there’s not only coming back from injury that will serve as motivation for them on Saturday night.  Luke McGrath is skipper but that’s a role which has also been held by Rhys Ruddock and Ross Molony and all three have had stellar starts to the season and thus would love to show they might have had a look in over the past few weeks.

The most interesting pick is Ciaran Frawley at 12, not for the first time this season either.  With Ross Byrne back at his familiar 10 after appearing at 13 in last year’s corresponding fixture, not only will he be looking to link up with his wingers Larmour and Adam Byrne but he also has his inside centre and his full back Jimmy O’Brien to help provide the creativity so our options appear endless.

Frawley will also be strongly tested on defence, as would any 12 that has Stu McCloskey barrelling down at them every few minutes (and the boy Hume at 13 isn’t exactly a lightweight either) and as always I’ll be looking at this aspect possibly more than attacking throughout.

We really got spoiled at lineout time over the past few weeks, with last Sunday’s "16 thrown, 16 won" showing the pick of the bunch and mostly Leinster players involved in both throwing and receiving the darts.  Hopefully Messrs Toner and Molony will be just as easily found by James Tracy from the start because much will rely on this.

Obviously the Ulstermen will be keen to bounce back after their last visit to Dublin didn’t exactly go to plan, but they did have a run of four wins leading into that match and with John Cooney among those returning to their own starting lineup, definitely have the ability to make this match live up to its billing.

No doubt they will be looking for their strong running centres to soften up our defensive cordon as quickly as possible so they can get the most out the speed in their back three, as well as Cooney's ability to make the most out of even the tiniest opportunity, with the youngster Doak in reserve more than able to deputize when required.

The bookies have Leinster winning by 15 but while I share their optimism and actually think we could push it to 17-19, I can also picture myself sitting looking at the match after half an hour and wondering what on earth I was thinking!

Hopefully the weather will behave and we’ll be treated to yet another feast of quality interpro rugby, I hope to see you there on the night.  As always follow me on twitter throughout the match and at fulltime head on over to the Facebook page and leave your thoughts. JLP