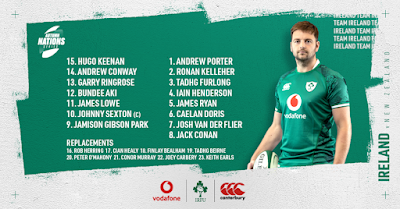 First things first - best of luck to the girls against the USA at the RDS on Friday night.  We all know there’s a lot going on right now but match day is match day and there is always plenty of time in the six other days of the week to talk about the herd of elephants in the room.

When it comes to the men on Saturday afternoon, even as superstitious as I am, I actually couldn’t be more confident about an Irish team set to face the All Blacks.  Does that mean I think we’re definitely going to win?  Of course not.  But I do think we’re as well placed as we could possibly be to make them have to fight like hell to beat us.

Before I explore that potential hubris, I’ll harp on the one negative vibe I’m getting when I think about this clash.  Adversity.  For all the joy the amazing feast of individual displays and team cohesion we saw against Japan last week brought us, the one thing the boys in aubergine were denied was a sense of having to fight our way back from a losing position.

If anyone doesn’t believe our weekend guests aren’t capable of racking up a 14+ point lead in the opening quarter then they haven’t been paying attention.  It’s always possible no matter who they’re playing, their standards are just that high.

Obviously I hope, and actually expect, that won’t happen but if it does we would actually get a true sense of where we are.  Do we capitulate to let them rack up another score around the half century mark or can we knuckle down and apply the pressure like we know we can?

Assuming that what is essentially the same 23 can play in the same “zone” come 3:15pm on Saturday in front of a packed Aviva Stadium, then the above is the only real scenario I’d be afraid of.  Otherwise all that can really hurt us are the usual things out of our control like the bounce of the ball or 50/50 decisions going against us.

I hate to bring up the fact that I predicted Iain Henderson starting over Tadhg Beirne (well, ok, of course I don’t HATE it, I LOVE IT) but I’d have to stress it’s nothing against the Munster lock I’m a big fan of his I just think pound for pound in a match like this I’d have to nod to a clearly-in-form Hendo and get the full impact of TB from the bench.

Overall, as skipper Sexton pointed out during the week, it’s hardly going to be exactly the same game plan as against Japan but the idea will be to aim for similar levels of technical precision.

I had a good chat with Paul “Driving Maul” Bains during the week about where the All Blacks are right now and despite the 205 points in their last three matches there are areas in which they can be hurt, especially up front if we get the right numbers to the breakdown.

Then it will be all about backing ourselves to run and offload and we certainly have the players to make the hay on the (possibly rare) occasions the sun is shining.

Now - how much should we fear the kicking game?  Finding alternatives was the reason last weekend’s display gave us so much joy but let’s not forget there were times we not only went to it, but also it worked a treat.  This particular back three, with Lowe more than able to hit them, Conway more than able to catch them and Keenan more than able to do both, can definitely make things happen.

But...well, you know where I’m going with this...when the boot goes to the ball, there is absolutely ZERO room for error as we have all seen the likes of Will Jordan and Jordie Barrett spot a try opportunity from 60 metres away.

Then there’s defence.  Definitely an area where Irish teams try to squeeze out victories and even with a more open attacking approach we will of course have to be on the ball when our moves fall apart and they spot something in transition.

Here is an area where we possibly did get something of a test against the Brave Blossoms and I really thought Aki and Ringrose worked extremely well together (with the exception of their lone try) to pick out the strike points and they should be able for the rise in standard provided by their opposite numbers.

One other change from the Japan win is on the bench where Rob Herring comes in.  I guess I’d be laughed off the ruggersphere if I even suggested I had a problem with this, given the extremely Leinster-heavy nature of the squad, but you’ll have to believe me that I see sense in this move.

Much as I’d love to see a Coles v Sheehan clash in the final quarter as I see the latter to be a potential upgrade on the former’s style, with a few lineout wobbles last week I reckon the Ulster hooker’s abilities here could come in very handy in the closing stages.

Elsewhere on the bench, well...would it be mean for me to say I reckon the plan might be to get a full 80 out of Johnny Sexton?  That’s why I wanted him taken off earlier last time out and I’m sorry but on current form if we needed a score or two in the closing stages, bringing on Carbery wouldn’t fill me with the same confidence as Jack Carty would.

We will certainly need as much bang for our bench buck as we can get elsewhere though - this is far from the first rodeo for the likes of Messrs Healy, O’Mahony, Murray & Earls and all going well it could be close enough for us to need all of their experience at that stage.

Traditionally I try not to focus too much on the All Blacks individuals whenever we play them - you know you’re up against anyone who wears the jersey so it’s up to you to focus on your own game.  I can’t help but be fascinated by the back row matchups however - Ardie, Dalton et all have been tearing up trees so it will be the biggest test yet for our top trio.

Right, head on the block time.  Can we win?  Abso-fricken-lutely.  Will we?  Well the bookies have us losing by 11 and ye Gods that’s a number that looks incredibly beatable doesn’t it.   Gun to my head I’m saying we fall short by less than seven with all the disappointment coming from good reasons.

But whatever happens if you have a golden ticket, whether for the RDS Friday, Aviva Saturday or even both, I hope you get maximum enjoyment and here’s to the boys doing us proud again.

As always we’re giving the match the full Harpin treatment so why not follow us on the Twitter machine throughout before heading to the Facebook page at full time to leave your thoughts.  JLP