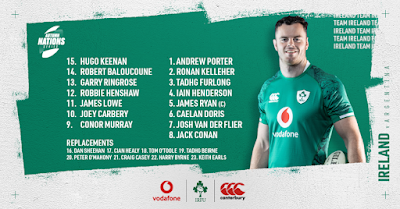 LATE CHANGE TO STARTING LINEUP
Jack Conan out, O'Mahony to 6, Doris to 8, Baird to bench.

So...how many times have you watched last Saturday’s match by now?  Five?  Six?  Definitely belongs up there with the all time best displays.  Now it’s time to see how we can bring that forward.

We had a decent chat about all of the above on this week’s podcast, thanks to the knowledgeable contributions of Mark “@hoomanbear” Jackson and Tom “@LeinsterRoyalty” Coleman.  The consensus was that there shouldn’t be a need for too many changes for the lineup and that seems to be what Andy & co have gone for with this matchday selection.

No doubt many will feel they could have been a bit more adventurous for this final match, given how convincing we were the last two weekends.  But despite the fact that Argentina aren’t exactly on their best run of results right now, are they really the team we want to be taking chances with?

The time for being adventurous during this Autumn Nations Series was in Las Vegas yet we didn’t get the chance to do anything there for it to stay there, so I’m pleasantly surprised that they have more or stuck to their guns this weekend.

Just to be a little different this week I’m going to harp on each unit individually, starting with the front row.  I mean, there’s not a whole lot that can be said that hasn’t already been said elsewhere, I guess I just want to add to all the praise these lads have been getting as well as marvelling at the wisdom of switching Porter over to the loose head side.

In the second row we might have the same personnel only with a very different dynamic.  With Sexton unavailable, James Ryan assumes the captain’s duties though I really don’t think anyone in the game would argue that Iain Henderson is also more than capable of assuming the role.  Clearly they are going this way with a succession plan in mind and it will be very interesting to see how he gets on this Sunday outside his regular roles (which have been going superbly so far this November).

Now to another top trio - the back row.  Before Farrell took over, I very much doubt anyone would have nominated this combination but after watching our last 180 minutes of action, I very much doubt anyone would be willing to change.  Yes, I know I’m running the risk of  seeming Leinster-biased but I really don’t care - their performances speak for themselves.  I see them as like an elite “dark ops” unit which quietly goes about their business and with Doris & Conan already picking up PotM gongs, who would bet against JVDF completing the set.

The biggest, and by far and away the most intriguing, change to the selection is a halfback, where JGP & Sexton make way for Murray & Carbery.  Nobody doubts the credentials of this duo, the only thing I’d wonder is can, or maybe even will, they play to the same formula we have seen the previous two weekends?

I mean it’s not like we stuck to the strategy in the closing stages against either Japan or the All Blacks, although you could cheekily argue we were more at least two scores ahead on both occasions by the time the 9 and 10 had both been changed.  Say what you like about the box kicking game but Murray is up with the best on the planet at it so maybe to make him favour a high tempo wouldn’t be using him effectively, we’ll see how they go.

When it comes to the centre, well we’re back to the “Henrose” pairing I have always favoured although Bundee Aki really made missing Robbie all the harder the past couple of weeks.  Hopefully both centres will come through this match unscathed so Leinster can also reap the rewards down the line.  On Garry, we are now starting to see him at the peak of his powers as he being afforded more ways to contribute to our attack without losing anything from his crucial defensive coverage as well.

On the wing, while Andrew Conway had a magnificent couple of outings and still is crucial to our restarts and general kick chasing, what a pair of wide players we have this time out.  Robert Balacoune definitely has a quality that needs to be shown at test level and this is a perfect opportunity for him to add to his impressive debut against the Eagles.

Meanwhile James Lowe has more than rewarded the faith shown in him this November and if we do manage to play with the same openness we showed the last two weeks, these two should find their way onto the scoresheet.

Last but not least among the starters, Mr Dependable himself Hugo Keenan.  His opposite number on Sunday, Emiliano Boffelli, showed against Italy last week that he’s pretty handy himself under the high ball so prepare yourself for several fascinating “contestable” kicks though you’d do well not to bet against the Leinster & Ireland man.

Our bench has an interesting call or two - Tom O’Toole is another Ulster player getting a chance as it seems Cian Healy’s successful exploits on the tight head side for Leinster haven’t been brought to test level.  Dan Sheehan will get another 20-30 minutes to show what he can do while Messrs Beirne and O’Mahony will bring their combined poaching prowess to the closing stages once more.

Now at halfback, this pairing is interesting.  I reckon if we really want to play the way Sexton was leading us the past couple of weeks, then Jack Carty was the best replacement and when I heard he was called up to the squad I thought we’d get to see him.  But it seems Harry Byrne isn’t just there for the experience so we’ll see how he and Craig Casey hit it off.  Our halfback performances will be key to our overall performance from start to finish.

How could I possibly leave out Keith Earls, he’s another Mr Dependable for Ireland and in many ways his experience is perfect for our 23 jersey right now, though of course he is more than able to start as well if required.

The bookies have us 14-point winners, for once I think they might be low-balling it.  Normally I’m afraid to go with their optimism but I actually think a combination of our confidence and the Pumas’ general lack of it (surely there’s not much to be gotten from a win in Treviso, all due respect etc etc) mean we should be aiming to bust through that margin.

While the World Rankings aren’t exactly the most important thing in the sport, for this match I reckon they offer Ireland some incentive.  I think we should go for maximum points to try and cement our top-four spot, and to do this we’d have to win by more than 15, so I’m going for us to do it by 20.

Of course by the time this match kicks off on Sunday, we’ll have already had a feast of test rugby, with Ciara Griffin’s farewell outing at the RDS plus Dupont v Smith the obvious highlights.  Be sure to follow us on the twitter machine throughout the match before heading on over to the Facebook page to leave your thoughts at full time.  JLP