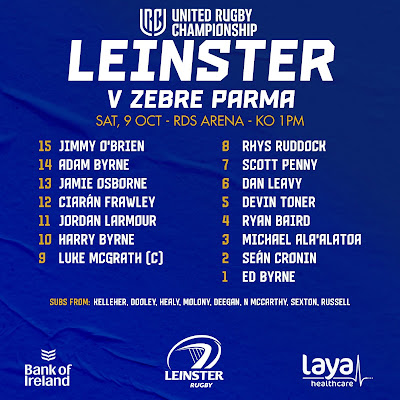 Normally when a Leinster match has a 1pm kickoff time I start my preview with a moan about it but after last weekend I’d have been more than happy to get myself down to the RDS for the early hours of Monday morning if I had to!!!

And yes, I know we won, but nothing about that result can make up for the 80 minutes viewing (twice that for those of us who chose to harp on it a day later) plus by Leinster’s standards, win or no that was a display they’ll be looking to get out of the system as soon as possible.

Plus what we have on Saturday represents not only a return to the RDS, but with the reduced capacity it could also be spun as close to an exclusive showing just for season ticket holders so the pressure will really be on.

In my writeup for last week (would normally include a link with those words but for that one, maybe not) I sent the most negative vibes in the direction of the starting 9/10/12 combination of JGP, Ross Byrne & Conor O’Brien.  None of them are involved this week but let’s be absolutely clear - just as Leinster will brush off the display and come back stronger, so will they as individuals.

But whether be a prior plan or from necessity, it’s a completely different attacking look to a team which has several returnees to the starting lineup.  Harry Byrne will be looking to step up a level from last season - not entirely sure he’ll learn a lot from this particular encounter but after some injury concerns the rugby under his belt will be a start.

And when it comes to creativity the three amigos of Harry, Frawley and Jimmy O’Brien from several “50-burgers” last season are back together so the expectations will be high, especially when you consider they’ll be handing the reins over to some guy called Sexton in the latter stages.

We're also delighted to see Adam Byrne back in action; he’s another who has been trying to fulfill his potential only to be hauled back to the treatment table - assuming he's still great at getting on the end of high kicks and such, he’ll be disappointed not to find himself on the scoresheet, with Mr Larmour vying to keep up with him of course.

Jamie Osborne at 13 can’t be ignored.  Definitely a great prospect and he keeps showing up in matchday 23s so there are definitely plans for him to feature a lot for us - it will be interesting to see what his role is among this set of backs.

In the pack, only Michael Ala’alatoa is retained in the same position from last weekend’s starters, with Rhys Ruddock shifting to number 8.  With this attacking 9-15 group on the pitch (including skipper Luke McGrath, didn’t mean to leave him out, his support will be key), it should be all about providing the right supply of possession for them and I reckon this selection can definitely do that.

Ryan Baird will be keen to put his Newport cameo behind him and with Ruddock, Leavy, and of course Toner among the good lineout options, and Scott Penny knowing a thing or six about finding the try line, if Sean Cronin and Ronán Kelleher (another returnee) can make their darts count around the 22, there may be times we won’t even need Harry & co.

So I make it 13 changes to the Leinster starting personnel, and that’s not really surprising given all that happened last time out.  But after losing 3-36 at home to Ulster last week, Zebre Parma coach Michael Bradley has done a “hold my beer” by changing all 15 so I guess we can’t learn a whole lot from their YouTube clips!

I really don’t want to talk them down too much but it’s just stating a fact when I say the 37-point spread put forward by the bookies looks fair.  Zebre will obviously be more than keen to defy that as much as they can, and if they can match what the Dragons did against us who knows, but for me I see that number 37 as one the boys in blue need to go out and beat.

Sure, if the blow out does happen we’ll hear all the usual comments like “why are there Italian teams in this league” and “you learn nothing from a score like that” but if that’s what will put that Newport nightmare behind us, then I’ll be delighted to see them on my timeline come 3pm tomorrow.

One thing that may literally put a dampener on things will be the weather, looks like there might be a sprinkle or two around kickoff time but that shouldn’t deter the lads and I’ll still be expecting them to get the job done.  So no actual prediction from me other than to set that points spread as a target.

As always keep the tweets coming throughout the match then hop on the Facebook page (assuming you still do your hopping there with all that has happened!) after the full time whistle.  Here’s to a return to RDS Leinstertainment - see you on the other side!!! JLP