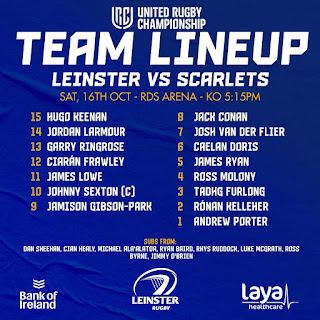 With the URC cutting down it’s regular season to a trim 18 matches, the fact that this is Leinster’s 3rd home date in our opening 4 fixtures leads to a lot of mental maths.

After this weekend, 8 of our remaining 14 will be away from D4, and on top of that, of the remaining 6 at home, half of those are interprovincials so absolutely nothing will be guaranteed.

So basically with both Ulster and Munster having gotten off to maximum point starts, all of this means every single match point needs to be put in our column at every opportunity so we don’t find ourselves in a chase for silverware at the business end of the season.

To be fair, all the talk of “leaving a bonus point behind in Newport” was tempered somewhat by the Dragons’ follow up performance in Galway but still, we can’t go out on Saturday counting on the Scarlets to replicate their own home form against Munster - we need to chase maximum points and not just for the league position either - it’s about time we started to look Europe-ready to boot.

So with those expectations in mind, let’s have a look at this latest matchday 23 shall we, and there is certainly a “Europe-ready” look about it.

Despite his prolonged appearance last weekend, Johnny Sexton returns to the 10 jersey and I have to say this is the most “footballing” back line I have see lining out for the boys in blue for quite a while.

This would certainly line up with the way we have been playing, with quick hands and extra offloads featuring more and more in our approach, and from 9 to 15 there is creativity to burn so the visitors’ Hugh Hogan-led defence is bound to be tested to the max.

Of our starting backs my interest will be mostly on Ciaran Frawley, who has played a lot of 12 but mostly alongside Harry Byrne so it will be interesting to see how he fits into Sexton’s gameplan, and Jamison Gibson-Park, who is yet to hit the heights he found from this time last year and with Luke McGrath doing well we could really do with the two of them shining at the same time.

In the pack, well, there’s even more “wow”.  First, with Andrew Porter switching over to the loose head side, we get our first chance to see the front row dream team as it was intended with Kelleher at hooker and Tadhg Furlong back from the Lions.  And it’s not like they’re guaranteed to have things easy at scrum time with Wyn Jones and Ken Owens among the Scarlets trio.

During the week on our podcast Mark Jackson rightfully sang the praises of Ross Molony’s workrate in his appearances so far (despite not pleaying last weekend he still leads the team in tackles) and his name does not look out of place alongside James Ryan in a strong starting XV.

That leaves the back row, where we know any combo is going to be strong but there’s something about Doris/JVDF/Conan that suggests we could be close to peak efficiency across the three roles, we’ll see how they get on against Shingler, Lezana (making his Scarlets debut) and Thompson.

When it comes to our bench, clearly Cian Healy was finding his tight head remit way too easy so he thought he’d nip back across to the loose head side just for the occasion.  It’s a really strong set of replacements especially in the forwards.

Overall the 2017 champions are sending over a decent squad, even if they are without the likes of both Liam and Scott Williams, Halfpenny, Patchell and others.  That defeat to Munster will have them eager to make amends and will no doubt be heartened by the headway that the Men of Gwent in particular were able to make in slowing down our attack patterns.

But what I’m counting on most of all is our defence.  One try conceded in three matches is not just a testament of the quality of opposition - in this area we seem to have hit the ground running this season in terms of our organization without the ball and if this 23 can maintain those standards, the visitors should have a tough time putting points on the board.

All which leaves it down to us to not only create chances but also convert them if we are to get the required full tally of match points.  The bookies agree we should achieve this and predict a spread of around 20 points.  I’m confident we can get the job done as well, though I reckon it will be important to establish a decent margin early unlike recent weeks.

So if you’re heading to the RDS I hope to see you there, otherwise be sure to keep tabs on Twitter throughout the match before heading over to the Facebook page at full time to leave your thoughts.  Here’s to another day of quality Leinstertainment! JLP