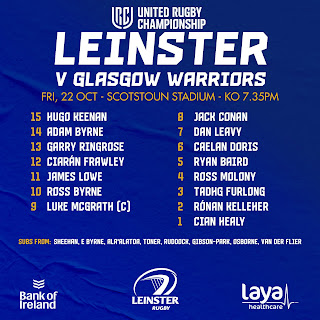 Leinster’s task on Friday night may not be easily done, but it is easily explained.  Make sure we’re still in the top two in the league come full time.

“Only” the full set of match points can guarantee that, and if Ulster come good against Connacht at the Aviva on Saturday (far from easily done either of course) then that could set up a massive top of the table clash at the RDS in the next round, which doesn’t come about until the last Saturday in November.

And looking at the matchday squad we’re sending to Scotstoun, it looks like we fully intend on going for it.  Gone are the days when a Friday night away fixture just before a block of internationals saw us going deep into the academy to fill out a matchday 23.

Despite a few tweaks here and there from the decisive victory over the Scarlets, this still looks like the intention is to bed in certain combinations to a new style of playing the game because when that test window is over, the Champions Cup will be just around the corner.

Where to begin?  How about in the centre.  The news during the week about Henshaw’s injury was far from good so there’s a lot that can be read into the Frawley/Ringrose duo being put together for a second week running.   After good outings for both last time, there’s no better way for the partnership to gel even more.

And while Sexton is unavailable, Ross Byrne had a decent cameo at the RDS which he’ll look to build on, with both Adam Byrne and James Lowe no doubt keen to get on the end of many a kick pass throughout.

On the subject of Lowe I had a pop at his defensive drawbacks against the Scarlets but as always when I single out a player I’m glad he’s getting a chance straight away to make me eat my words and I’ll be happy to grab a fork should that happen.  I have a feeling the Warriors will be looking to his wing for space so he should have his chances to keep them out.

In the pack after toying with the 17 and 18 jerseys we have Mr Proper Church back in his more familiar number 1 as reward for a string of impressive final quarters.  Interesting to see Ryan Baird and Ross Molony together in the second row as the latter has been tearing up trees so far this season and assuming the contest is to join James Ryan in a European Leinster pack, this will tell us a lot about who’s ready to step up.

But that back row - seriously?  You look at Doris/Leavy/Conan and you first say, “awesome”.  But then you say, “hang on - what about Ruddock and van der Flier” before realising BOTH are on the bench as we go for the 6/2 split option.  We’re doing this more often of late and I wonder is it with the big European knockout days in mind.

Of course our opponents will hardly be making things easy for us, and whatever you thought of the Rainbow Cup the memory of our last visit to Glasgow is still pretty fresh.  For all my talk about our strong back row it is sure to be tested with skipper Ryan Wilson and top prospect Rory Darge going against us.

They have done pretty well themselves this season and sit in 4th place after 3 wins on the bounce following an opening weekend losing BP in Belfast which is far from a poor result.  With the experienced Ali Price & Duncar Weir as halfbacks they certainly won’t be short of options.

But if Leinster can continue the upward curve in our performances and assert ourselves early then what seems like a tough 13-point margin of victory set by the bookies could well be within our grasp.  I’m being a bit more careful with my own prediction putting it at 9-11 though if we can keep the defences strong we have the capability of beating it.

As always be sure and keep the twitter conversation going throughout the match, I’ll be doing so at @HarpinOnRugby and when the full time whistle blows head on over to the Facebook page and leave your thoughts.  JLP