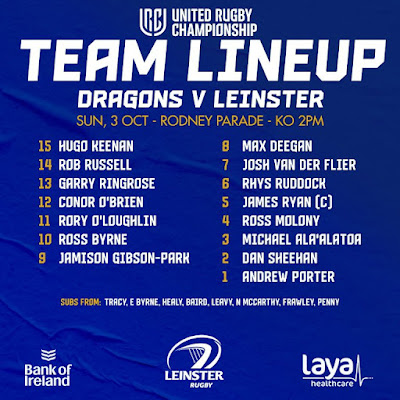 Definitely an impressive start for Leinster last weekend but with the regular season in this competition ever-shrinking and now a mere 18 matches, you can’t afford to bask in a victory without chasing the next one.

Next up is a trip to the Rodney (Dave) Parade to face the Dragons, a team we played on this same weekend a year ago to start the 2020/21 campaign.  Normally clubs would be happy to start a season with two home matches but seeing the Newport based side’s first two opponents have 12 league titles between them, they’re really up against it.

However they did run the Ospreys pretty close last week and Leinster have had the odd hiccup at this ground over the years so let’s see what side Leo is going with shall we - there are some very interesting changes.

Stand out name for me on the team sheet is Conor O’Brien.  Back when we were able to watch Leinster A perform in the B&I/Celtic Cup, he was one of a host of players that promised to make a big breakthrough yet Conor has struggled with injuries more than most.

And when I use the word “”breakthrough” in his case I mean it because from what I’ve seen he seems to be an excellent alternative for Leinster when Robbie Henshaw is unavailable, with strike plays something of a specialty for him, and with Garry Ringrose playing alongside him we could well see whether or not that is true.

On the wing there is a starting debut for Rob Russell, which at this early stage of the season demonstrates an immense amount of confidence and we definitely got a taste of what he can offer in the friendly against Harlequins a few weeks back.

Johnny Sexton takes the week off and in his place at 10 is Ross Byrne.  It was interesting to see Leinster’s style change against the Bulls when he came on, we went from high bombs into the 22 to a much more “KBA” approach (without any drop in production) and with this centre pairing starting alongside him here, there may be even more variation to come.

As for Sexton’s captain’s duties, they pass to James Ryan which will be a good test for him.  He was outstanding last week especially on opposition lineouts and with Ross Molony also impressing in the second row they’ll be looking to create another strong platform for Leinster.

Max Deegan gets the nod at number 8 alongside Ruddock and van der Flier, who makes his 100th appearance for the province.  But for all this talk of changes from last week, the fact that both the starting and bench front rows are exactly the same is equally worthy of harping.

Both Andrew Porter and Cian Healy couldn’t have had better first attempts at their new positions last week, so hopefully this won’t prove to be a “tricky second album” for them, though obviously game time is exactly what they need to help them settle.

Going back to the differences from last week, a 6/2 split on the bench suggesting we expect a physical encounter (as if the Bulls were meant to go easy on us!).  Nick McCarthy is set to make his “debut 2.0” with Ciaran Frawley presumably covering both 10 and 12.

Standout name among the replacements is definitely that of Dan Leavy - every Leinster fan will have fingers, toes and eyes crossed that he can have a decent run of games under his belt to be ready for Europe and test selection.

The bookies aren’t showing a lot of faith in the home side, giving Leinster a 17 point advantage, and if we continue in the same vein as last week, that margin and more is very possible.  I’m still in early season pragmatist mode and will go a bit less with my prediction, a 12-14 point win, including a bonus point.  By the way - if you’re reading this and you’re not a Leinster supporter, yeah I know that forecast looks arrogant (“Meh, maybe a 17 point win is too much, I’m gonna say 14”) but you’ll have to trust me I’m really trying to give an honest number based on my opinion!!!

As always follow me on Twitter throughout the match @HarpinOnRugby and when the fulltime whistle comes, head over to the Facebook page and leave your own thoughts.  JLP