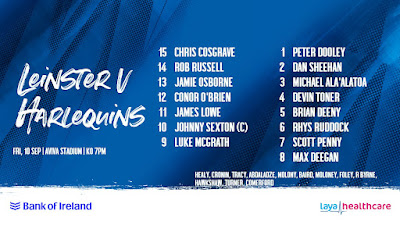 Now I’ve often harped on how rugby shouldn’t copy everything football does, but I have to say a preseason match between the champions of both Pro 14 and Premiership would make a decent Super Cup.

And it doesn’t even matter who the opposition is - back in 2015 it was RFU Championship outfit Moseley providing the opposition in this traditional home friendly fixture and while there might a been a hint of “Them? Really?” from fans at the time, it couldn’t diminish the excitement of knowing live Leinster Rugby was back after a long summer off.

Notice how I haven’t even factored in the COVID disruption?  That was for a reason.  Because as fans we are always pumped for this match no matter what has gone before, so when you factor in the small detail that fans haven’t been able to watch the boys in blue in big numbers since March 2020, you can imagine just how amazing an occasion this is going to be, even if the weather doesn't exactly promise to be clement.

And there's even a further element to the occasion which you might think would dampen the spirits yet never does - the starting lineups, which invariably excludes a bulk of the "marquee names" as they would have earned an extra break due to summer international activity. Yeah about that...James Lowe, Devin Toner, Luke McGrath, Rhys Ruddock, Cian Healy, Sean Cronin and....who's that out half again who's also captain? Think I've seen his name before....

So what have we got - two domestic champs, the home return from off-season, the return of five-figure crowds, a rake of household names in the lineup...seriously, what more could you want for a match like this??? (Well, a home win wouldn't hurt I suppose!)

Then for analytical nerds like myself, there is also a host of prospects getting their chance to play on the hallowed Lansdowne Road turf. With the lack of matches at schools and "A" level over the past couple of seasons, ones I usually managed to get to, I have to admit there are a few listed tonight I have yet to see in Leinster action, but if I had to single one name out for interest, it would be Chris Cosgrove at full back because the ability to wear blue 15 in the absense of Hugo Keenan is no doubt going to be very important to Leinster over the season so this selection is huge for the 20-year old.

Elsewhere throughout the squad is Rob Russell and Brian Deeny who will also benefit from an Aviva start but it's actually our centres, who have made a good few senior appearances already, who could be giving us a serious glimpse of Leinster's future.

We tinkered with the 12 and 13 roles quite a bit in the Pro14 last season yet when it came to a match when Robbie Henshaw was allowed/available, we reverted to his style of carrying power from that position. Should we need it without him going forward, Conor O'Brien is definitely the man to step in and it's great to see him back from long term injury.

Alongside him is Jamie Osborne - interesting how he did so well for the national Under 20s back in June yet returns to 13 where I suppose Dr Phil wants him and if he and Conor live up to their potential we could be seeing an awful lot of them wearing those numbers down the line.

In the pack the eyes are drawn to only one position. What, no Tadhg Furlong? Awww. Well then Andrew Porter? No? Awww. So who's next then? Only Samoan international and Super Rugby multiple-title-winning veteran Michael Ala'alatoa (get used to pronouncing it folks : ala-ala-toa) and what a way for him to make his debut! He starts in what is still a cracking front row with Peter Dooley and Dan Sheehan.

(Update - since typing the above paragraph I spotted this very interesting Bernard Jackman tweet...)

Both ends of the experience spectrum are covered in the second row where Devin Toner partners Brian Deeny, while the by now legendary Leinster Rugby Back Row One-Armed Bandit has thrown up a trio of Ruddock, Penny and the returning Deegan (who I'm tipping to have a stand out season once he stays fit).

How will we play? Who's to say. Just add that to the list of things I'm looking forward to this evening. Much has been said about what we were lacking when it came to the Euriopean crunch in recent seasons, and you can be sure Leo, Stu & co have been working hard to bring it to our game.

As for Quins? Well for one thing, what an amazing second half of the season they had. Those Premiership playoffs may not have been the most pleasing to the eye of defensive coaches, but to everyone else they were thrillers and fair play to Billy Millard and all involved at the club for being able to triumph from 4th place.

Danny "Actually World 12s sounds like a good idea" Care starts for them tonight with Italian international Tommy Allan at outhalf which will make for an interesting creative battle at halfback. Overall they have seven who started the Premiership final so it is bound to be a well contested match throughout although I won't give any detailed predictions for this one, just a home win (what a shock!).

My original plan was to do a "liveblog" for the match but given the Harlequins YouTube channel is screening it live I'll save my fingers for tweets scattered throughout the action, keep an eye on @HarpinOnRugby - we'll be back to the usual harpin' routine next week starting with a match writeup on Monday.

In the meantime, enjoy yourself tonight if you're going, be sure and give your full support on social media if you aren't!!! JLP

PS - Best of luck as well of course to Leinster's Women on Saturday evening at Energia Park in their Championship decider. I'd love to say I'll be able to make both matches but I have a feeling I'll have to rely on second best, although given that it's TG4's live coverage that's not too shabby either! 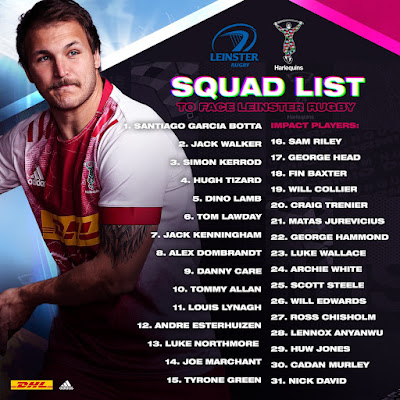