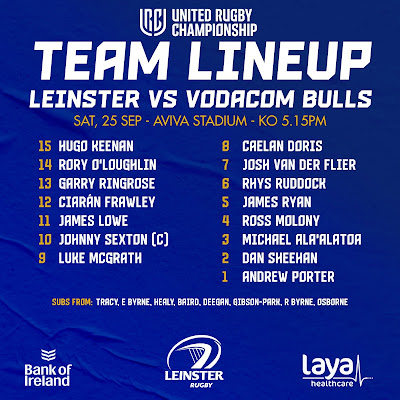 OK here’s the plan for Saturday...from 8am to about 3:30pm, I’ll be doing everything I can to get things done here at Harpin Manor without straying too far from some kind of screen to be able to catch all the awesome early rugby that’s going on.

Then it’s destination Aviva where I fully intend to be settled in my seat by 4:44pm when I can get on the tablet and watch Ireland open their Edmonton Sevens campaign against Germany.

Next it’s from one live You Tube stream to another as I’ll be taking in the first 15 minutes of Ireland’s critical Women’s Rugby World Cup qualifier against Scotland, which of course will remain (stream permitting) on the screen throughout the event which will be unfolding before me.

I’ve harped many many times already on my frustration with all the clashes and to an extent I appreciate there wasn’t a lot that could be done about it but I will add one further point...are they REALLY seriously thinking of shoving another form of rugby into this already overcrowded calendar?????  Anyway...best of luck to both the Women’s XVs and the Men’s 7s they are both in with a really good chance of doing well in their respective events.

Now...to the big season kickoff.  First, while it was long rumoured, Friday’s confirmation that there will be a shield on offer for the top side in each URC conference was amazing news.  Effectively it represents an Interprovincial Championship prize, although the record against the other 12 URC teams will also be taken into account so I’m sure come season’s end someone will be counting back to see who had good opponents away and vice versa (could possibly even be myself!!!).

Then we look at the two teams involved at the Aviva.  The URC will have already begun by the time this kicks off, yet with all due respect to the other 14 clubs this has to be the “marquee matchup” on the schedule, and I doubt that was a coincidence.  Leinster are the four-time reigning champions (wouldn’t be a proper fan-site if I didn’t throw in that fact every chance I get) while the Bulls have repeatedly topped the “log” in recent times between the four South African newcomers.

So after getting a taste of Leinster action against the Premiership champions a couple of weeks ago, it’s time for an even bigger crowd to witness some competitive rugby, and all eyes were on the twitter feeds at noon on Friday to see what kind of team Leo Cullen was going to send out to start the season.

You don’t have to be a paid up member of the Front Row Union for the names “1. Andrew Porter” and “18. Cian Healy” to be the first to jump off the Leinster team sheet.  These switches have been oft-teased over the past few months but to actually see them listed on their respective opposite sides is something else altogether.

The long term options that these switches promise for both Leinster and Ireland are absolutely amazing, but in the short term, for this match, I’m marvelling at just how much confidence the coaching ticket has in the move.  Obviously if there is so much as a squeak in our scrummaging from start to finish there will be question marks raised so to name them both to new(ish for AP) roles on such a high-profile opening-weekend occasion really shows how much faith they have.

Speaking of showing faith, there was plenty left over to send Dan Sheehan’s way at hooker and it’s a great stage for him to stake a claim in what is a very crowded position pecking-order-wise.  Obviously we’ll be looking to Dan to be part of a settled lineout setpiece and with James Ryan and Ross Molony in the second row there’s every chance that will happen.

Of course the likes of Ruddock and Doris are also good options and they form the latest talented trio in the Leinster back row along with Josh van der Flier - if there was one area where we really expected the South Africans to test us it’s in the 6/7/8 combo and with Marcel Coetzee and Arno Botha opposite them they won’t exactly be strangers.

I felt Johnny Sexton was easily Player of the Match against Quins and if he can impose his will on this match as early then we’ll be looking good.  Interesting to see Luke McGrath getting the nod alongside him although I dare say he and JGP will have a great tussle for the jersey throughout the campaign.

Another area where the Saffers tend to bring the braun is in the centre so a lot will depend on how Ciaran Frawley and Garry Ringrose, both back from injury/surgery, will handle their opposite numbers both with and without the ball.  We should also see how Frawley’s footballing talents will be integrated into the play with Sexton at 10.

On the wing, I really think this is somewhere that Rory O’Loughlin can shine this season.  Don’t get me wrong he has done well in the centre when called upon, but his skill set is also well suited for the way we use the wing position.  As for that Lowe fella on the opposite wing, we all know to expect the unexpected from him and I will be very surprised if he doesn’t make his way onto the scoresheet.

That just leaves Hugo Keenan at full back.  Not much that needs to be said about him really, in a very short space of time he has played himself into being our Mr Dependable and there’s no reason to expect anything else.

Finally there’s the bench and I go back to my point about the coaches showing their confidence by their selection - the 23 jersey is always going to be a crucial one for Leinster in our quest for trophies so how amazing an achievement is it for young Jamie Osborne to be handed it to start the season?  Elsewhere there is plenty of impact to call upon in the likes of Tracy, Deegan and Baird.

On the visitor’s side, well they might be without their Boks who will have by then played the All Blacks down under, but as Tom @LeinsterRoyalty Coleman pointed out on the podcast during the week, they are actually used to carrying with a big squad much like we are, what with the Currie Cup and all, and whether we recognise the names or not, they no doubt have their own Deegans and Osbornes in their lineup.

And with DoR Jake White no stranger to the big occasion, I’m sure he will have drilled into his match day squad that a massive performance is required, especially given how the Rainbow Cup final went for them.

Still, that hasn’t stopped the bookies from slapping Leinster with a whopping 25-point spread at the time of writing!!!!  Hey, I like to be confident in these previews but I can’t bring myself to say we’ll beat that if only for the amount of disrespect it would show our visitors.

To be honest, while I always look to the boys in blue to upholds the standards I know they strive for, any manner of a bonus point win would be absolutely fine by me to start this shortened 18-match regular season.

And even after the full time whistle the rugby day won’t be done, with Munster also hosting South African opposition in the evening and the sevens continuing their Edmonton adventure right up to midnight.

So here’s to a successful day’s rugby for all Irish teams taking part - hopefully like me you’ll get to enjoy as much as you can throughout the day, be sure and follow @HarpinOnRugby on the Twitter machine and après match, head over to the Facebook page and leave your thoughts.

Ah, tis great to have the Leinster rugby back innit?  JLP