Throughout the season we'll be keeping tabs on Leinster's European Champions Cup opponents, which for the pool stages are Montpellier and Bath. 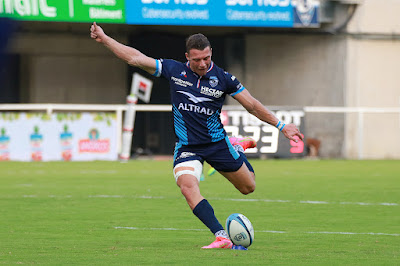 Fascinating match this - the reigning Euro champs hit their hosts pretty much straight from the kickoff with an aggressive breakdown approach as MHR tried to exit, then from the turnover shipped it straight out wide before Ntamack went over.

But the home side did all they could to settle in, playing in a way we might well see them try against Leinster.  Garbisi and forwards like Zac Mercer tried to keep a high tempo going when it was possible and when it wasn’t, it was the territory game with winger Rattez in particular really good at winning the ball back from box kicks.

However with all those risks, the accuracy has to be there and it just wasn’t for the most part, with wasted lineouts and knockons the order of the day.  In a way it seemed like Toulouse were toying with them as if they knew they could score whenever they wanted, and eventually they did stretch their lead to 3-17 which made it look like that was that.

Still Montpellier weren’t done and they nicked a couple of tries in the closing stages thanks to some great work from the likes of centre Serfontein and sub scrumhalf Doan (who had to play most of the match).

Overall Garbisi looked good on his debut with a strong workrate throughout, however I doubt the home fans would have been too keen about him missing the conversion towards the end which would have drawn them level before fluffing a pass in his own 22 as they tried to exit from the restart.

In the end a losing bonus point for MHR but you felt they could have gotten more. JLP 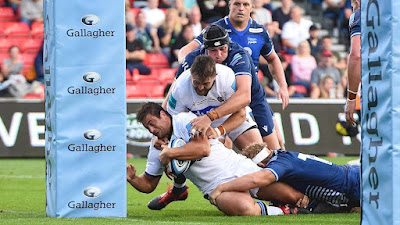 Also coming close were Leinster’s other European opponents Bath, who were also handing a debut to an outhalf, although Danny Cipriani has taken one or two trips round the sun more than Garbisi!
When I spoke to Matt @BathBytes Price on the podcast a couple of weeks ago, he informed me that Bath always seem to look good on paper without actually producing on the pitch, and I have to say that’s exactly what I saw from them here, although to be fair, Sale Sharks weren’t a whole lot different and throughout the match it really did look as though they were both trying their best to lose.
It had the typical “game of two halves” with the Sharks building a 17-0 lead although after Bath conceded a rake of penalties before the break, somehow avoiding a yellow in the process, it was actually Sale who lost a man as the clock went red.  With the sinbinning going into the second half, they managed to claw the lead back to 17-6 before Cipriani was forced off with injury to be replaced by 19-year old Orlando Bailey.
Now it’s probably overly simplistic to say Bailey turned Bath’s fortunes around, but still he was only on the park for a minute or two when prop Juan Schoeman, who had just brushed off attention from a medic, powered the ball over the line at the posts to bring the score to 17-13.
Sale actually started the match with their reserve outhalf as AJ McGinty wasn’t quite ready after being on international duty, and they definitely needed the Irish-born Eagle because he was pretty ineffectual especially in the second half as Bath clawed their way to a 19-17 lead.
With 2 minutes left on the clock it was Kieran Wilkinson, on for du Preez, who had the chance to put Sale back in front which he did easily, although Bath were to have one final go at reclaiming the lead when Bailey had a placekick towards the touchline on the left hand side.  The youngster started it right, it stayed right, and just like Montpellier, Bath had to make do with a losing BP.
In patches, Stuart Hooper’s side showed some decent enterprise with a bit of KBA here and Cipriani trying the odd chip over the top, something that would definitely come in handy against Leinster once it pays off. However as 80-minute displays go, this is not one they’ll want to bring to the Aviva in December, comeback or no. JLP
at September 23, 2021