My thoughts on the Lions Tour, such as it was 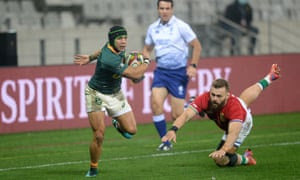 “...with much gratitude to those involved, we are for one last time on this tour able to lose ourselves in the wonderful diversion of sport”

After all he has been through it was of course amazing to hear the dulcet tones of Sky’s Miles Harrison as the third and final test kicked off in Cape Town, and for me the above portion of his opening remarks matched the occasion perfectly.

For that’s exactly what sport is meant to be for us as fans - a wonderful diversion from the trials and tribulations we find in everyday life.  Unfortunately when it came to this tour, those "t & ts" were very much spilling over into the sport itself, so much so that I chose to shut down the website altogether for the duration of the test series.

But while I did my best to look away from the rugby bubble during the week, I was always going to be glued to the actual rugby on the pitch, and I was genuinely disappointed with the final outcome.  Principles are one thing, but they were never going to stop me watching the matches themselves so while this won’t be the Monday writeup I usually produce throughout the season, I will offer a few thoughts on how the tour went.

So without any further ado I have scattered a few headings down the page so I can offer some rambling thoughts on each one, here we go...

The biggest, and possibly the only, positive for me about this tour was Jack Conan starting all three tests so I have to harp on that first.  He was nowhere near anyone’s tour squad before it was announced, let alone in the starting XV so for him to play his way to three consecutive starts when even die hard Leinster fans probably wouldn’t have blinked if Faletau or Simmonds had been chosen ahead of him is some achievement.

And keeping my blue hat on, seeing three Leinster players in the top 8 on the list of minutes played throughout the tests (courtesy of Russ Petty) was something to be proud of.  Of course I wasn’t all about my own province and I shared the general surprise in the likes of Iain Henderson and Tadhg Beirne not being more involved, but when it came to those actually on the pitch I thought the Irish contingent did extremely well.  I certainly don’t see many pinning the series loss on any of their backs.

WAS I WRONG TO SAY THE TOUR SHOULDN’T HAVE GONE AHEAD?

I spelled out all my reasons in this post so I won’t re-hash them here, but I feel it’s important to cite those views now, not only because I still hold them, but because the article shows I’m not just saying it now after the test series was lost.  It is actually possible to separate your thoughts on the rugby from your thoughts on whether or not there should have been rugby, which is what I’m trying to do here.

You can look at it two ways - maybe the rugby action is exactly what was needed what with all the COVID difficulties plus the civil unrest in South Africa but when it got to a stage when matches were postponed, venues were changed and the tourists couldn’t even cobble together a matchday 23, “farcical” doesn’t even come close to describing it.  And that’s all before we mention the biggest missing piece from what we’ve come to expect from a Lions Tour - the travelling red-clad army of thousands.

That the three test matches were eventually played without any further disruption from external factors absolutely does not justify the event going ahead in my view.

In the weeks that came between the tests I did my best to stay out of the day-to-day palaver online, but of course the whole Jaco Johan/Rassie Erasmus saga couldn’t escape my attention.

Here’s where I stand on it...multiple match test series aren’t exactly unusual in rugby, but in my view none of them carry the same significance as the Lions one every four years.  And yes, for the purpose of this argument I include the Bledisloe Cup in that, simply because those matches are not all played on consecutive weekends.

Coaches will always have concerns over calls from their team’s last match, but when you are due to play the same opposition the following week, and that result could actually decide a series, you definitely have every incentive to use every conceivable tactic you can to become a tenant in every important head you can, whether it’s the officials' or your opposition's.  This is what Rassie did, and it should not be allowed in the sport.

Whether or not that video actually led to the series win is absolutely irrelevant as far as I’m concerned, but if it goes completely without sanction, it could become a weapon of choice for more coaches which will find themselves in a similar situation, and with the Heineken Champions Cup adding a 2-legged round of 16 to the 2021/22 competition, it could happen sooner than we think.  Hopefully World Rugby will be able to nip it in the bud.

WHERE THE ACTUAL SERIES WAS LOST

Many are putting it all down to a decision by Liam Williams not to pass to Josh Adams.  I mean - are they for real???

I have no intention to get into detail over the full three tests but looking back on the series as a whole I think we can go back way further than that one moment.  For me the writing was on the wall towards the end of the first half of test number 2 when we were ploughing through phase after phase after phase and getting absolutely nowhere against a determined line of Springbok defenders.

And that we went from that spell all the way to the final whistle of the third test without adding a try that wasn’t from a set piece shows we were completely incapable of adapting to the challenges that were being put before us.

Possibly even more embarrassing was the effectiveness of Finn Russell.  I have absolutely nothing at all against Dan Biggar whatsoever and he played a big part in the first test victory, but to see our attack sequences come to life so vividly after Russell’s early introduction showed that this wasn’t a change that should have been forced.

Now I’m not saying the blame is 100% on the coaches - whatever you might think of their plan, it was one that demanded accuracy and that was most certainly lacking all throughout the team when it mattered most, particularly when it came to dealing with the Springboks’ aerial bombardment in test two and also when it came to discipline in tests 2 & 3 (15 penalties conceded in each as opposed to just 8 in test 1).

But I do have to go back to Gatland & co and point out that while we have to commend them for the four-year preparation for the first test which got pretty much everything right, the one-week preparation for each of the following matches was positively awful in that they seemed to think the exact same mindset was going to work again.

What I will say about the Williams to Adams thing was it was just one of many examples where the wingers on the pitch were massively underused.  I think Duhan van der Merwe only found himself in a handful of attacks where his actual skills were able to come into play - if you didn’t have a plan to get the most of the guy then why pick him?

And as for Adams, the second I saw Russell do a kick pass right into the Welsh winger’s breadbasket I thought this could be how we properly test the Boks only it was never to be even tried again.  Now to be fair, the Boks wingers didn’t get a whole lot of chances either, but when they did come, they were able to take them.

Standout players over the three matches for me were Am for the Boks and Henshaw for us, which speaks volumes for where the bulk of the action was.  There was plenty of "iffy-ness" in the general play with collisions, crooked feeds, suspect forward passes and prolonged TMO consultations but when all was said and done the more clinical team got the job done.

The Morné Steyn 2009/2021 thing is hard to ignore but if I were harping from a South African standpoint I’d probably be more concerned about the fact that my side needed him because Pollard’s boot should have put his team out of sight by then.

As you can see from the last point, I wouldn’t be keen on Gatland getting a fourth series, though actually that doesn’t have much to do with the result of this latest one.  I’ve never been a fan of coaches doing multiple tours...this should be an honour that all who have led one of the four nations should be vying for and if they keep going back to the same well every time, you have to wonder just how much interest there really is in the position.

But hey - now that the tour is done and dusted, it means we can finally put a mammoth season behind us, one that you could argue stretches all the way back to August 2020.  Now we have a few weeks to look ahead to the next Northern Hemisphere campaign.

Naturally with the South African situation still very much significant to us what with the new United Rugby Championship on the horizon, we have to hope that the rebranded tournament can proceed safely.  Once it does, as Leinster & Ireland fans we definitely have a lot of rugby to look forward to which in turn will give me plenty to harp on.  Fingers, eyes, and toes are all crossed, believe me.  JLP