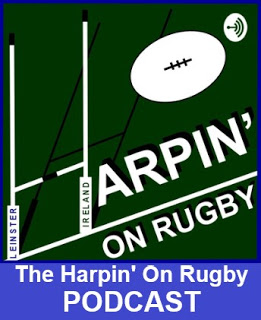 Last season was looooooooooong.
When you factor in the matches that completed the COVID-disrupted 19/20 campaign, then there were Leinster, Ireland and/or Lions matches pretty much every weekend from August 22, 2020 to August 7, 2021.
But now the 21/22 season is starting to take shape.  Fixtures were announced last Friday - not everyone was happy with them, but here at Harpin Manor we at least got a kick out of the nerdy pleasure to be found in updating our results and fixtures page.
Pretty soon we will have actual matches to harp on, so we'll be able to fall back into our regular week-to-week routine of features including team announcements, previews, TV listings and of course writeups.
To help get the content-producing juices flowing once more, we embarked on a project over the past couple of weeks whereby we used The Harpin On Rugby Podcast (or "THORP" as absolutely nobody else but me calls it) to try to give an overview of the areas of the game we plan to cover throughout the season.
It ended up being a project that involved brief interviews with 15 different fellow rugby fans (I'd love to say I planned for it to be 15, you know, what with it being a 15-a-side sport and all, but nah, just a coincidence) with the focus being on Leinster but also looking at the other provinces, the rest of the URC nations, Women's rugby and finally men's club rugby.
We published a new pod every second day but if you missed it, you have another chance to catch each one from this page, although an even better way would be to actually subscribe to our feed so you'll be able to catch more episodes throughout the campaign as we will definitely be doing a lot more harping as the matches start coming.
Once more I'd like to thank all who gave up their time to be involved and I look forward to chatting to them all and more again as the season goes on.  JLP
PART 1
Leinster's back row & halfbacks featuring Cian O'Muilleoir & Richard Mifsud
PART 2
Leinster's back three & second row featuring Tom Coleman & Mark Jackson
PART 3
Leinster's front row & centres featuring Conor Cronin & Neil Keegan
PART 4
Munster, Ulster & Connacht featuring Michelle Tobin, Ian Frizzell & Stephen Murphy
PART 5
Wales, South Africa, Scotland & Italy featuring Dan Pearce, Andy Daniel, Sandy Smith & Tom Golden
PART 6
Women's Rugby & Men's club rugby featuring @IrishWomens & Mark Strange
at August 30, 2021