Sorry, but my heart's not in this Lions Tour anymore 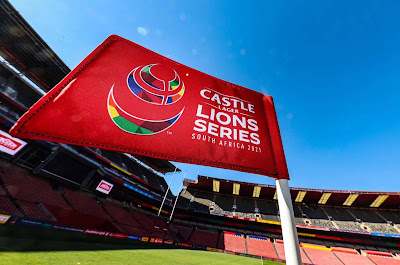 This was meant to be a writeup of the Lions' 54-7 win over the Cell C Sharks in Johannesburg last night, because that is what this site is for - if Leinster, Ireland or the Lions play rugby, I first watch it then I harp on it here.

Yet as I was scrolling through the tweets on my timeline during the match I saw one where a journalist I respect analysed a particlar passage of play and the thought suddenly hit me - "what the hell are we doing?"

It's not like there was anything wrong with the analysis at face value; it was perfectly fine and I actually agreed with it.  It was just the whole "normality" of it.  The whole "doesn't the Emperor look amazing in his new clothes?" of it.

Even without all the palaver surrounding this match at the Emirates Stadium in Johannesburg it had been a crazy rugby day.  Wallabies against France at 11am on a Wednesday?  Followed by three matches in the Under 20 Six Nations?  All while a former Springbok coach is taking up a new role in Houston of all places?  All while we're introduced to new competition with clubs like the Brussels Devils and the Tel-Aviv Heat?  But all of that was just the appetiser.

And before we consider the craziness that happened yesterday from the Sharks v Lions match, what about all the crazy stuff that was already happening which we're all calling normal in these times.

First, going by the originally released schedule of the tour, Wednesday's match was supposed to be in the Nelson Mandela Bay Stadium in Port Elizabeth against a South African "Invitational" XV.  We weren't meant to be playing the Sharks until this coming Saturday, at Jonsson Kings Park in Durban where they're actually from, not Johannesburg on the Highveld.

Why all the change?  Because COVID.  Also the reason for the lack of spectators.  But actually none of the above would have phased us had the extra drip feed been added to our IV of news over the last few days.

And that drip analogy is key because it explains my frustation.  First, the Bulls match is off this coming Saturday.  But that's ok, because now we can play the Georgians.  Oh wait, now we can't play the Georgians.  Oh wait, now we've cases in our own camp, but don't worry, the Sharks match is still going ahead.  Oh wait, the match may be going ahead, but we've to stitch together a 23 like we're a pub team desperately ringing around to drag hung-over players out of bed on a Sunday morning.

I'm sorry, but when I see some players wearing the wrong number on their back, others with no numbers at all, not to mention knowing there's only one sub to cover all seven back line positions, how am I supposed to motivate myself to marvel over a player's tackle technique or even speculate who's going to be playing where in the first test?

Whatever way the Sky Sports commentary team were trying to normalise things, all I could think about was whether or not this tour should be going ahead at all.

Of course I get that it's a professional sport that relies on TV money which in turn relies on advertizing money.  And I also get just how important it is for the players to be involved in these tours and they only come around once every four years.  I've been doing this harping for quite a while now; in fact I did a writeup all the way back in 2009 when the Sharks and Lions met under more traditional circumstances.

But you don't need a rugby blogger to tell you that a pandemic doesn't give a damn about economic necessity.  We've all lived it for over eighteen months now, and despite that length of time, the crisis is still full of unknowns and on the "log" of things we need to care about, there's a reason safety always comes first.

Can we be clear - this is not a Lions Tour.  Not even a bit of one.  Even before the events of the past few days, we have been watching a square peg getting jammed in an oval shaped hole and with every new development, the shape of that peg grows an extra side.  By now it's probably an octagon.

Someone along the line is doing most of the jamming.  Is it on the rugby side?  Broadcaster?  Advertiser?  Government?  Scientist?  I don't actually want to know.  I just want them to get together like grownups and thrash this out using all the relevant information and make a definitive decision which will stop the endless series of breaking news and scrambled reactions.

I'd love to watch a three-match test series between the best players from the four nations and the reigning world champions.  Who the hell wouldn't.  But not like this.

Should the tour continue down the line, I will watch, and I will cheer for the Lions.   Hey, I'm paying for Sky so I might at well get something for it.  And I'll probably even tweet during the matches, and I might even offer some analysis if I see something I like and besides,  Josh Adams getting his 20th try of the tour would definitely be something worth harping on somewhere.

But as much I love writing about this wonderful game, there will no more Lions previews or writeups on these pages over the coming weeks, for what that's worth.  My heart's just not in it.  JLP

UPDATE - since publishing this post I've heard that they plan to play the Sharks a second time at the weekend.  Drip drip....