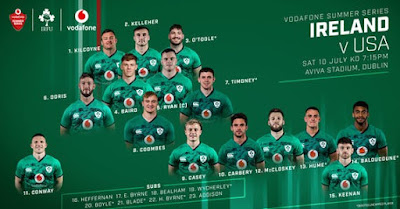 After all the hoopla surrounding Craig Casey’s brief involvement in the action against Japan, will the same people be happy this week if he‘s replaced by Caolin Blade after 50 to 60 minutes against the Eagles?  Probably not.

I reckon there were good reasons for him being held back - not only were we already forced to field two of out three sub backs earlier than planned but also when JGP Burns and Carbery were playing 9 10 12 that was when we had our purple patch that eventually won us a match that became more about winning than handing out caps.

So I’m delighted to see Craig starting this week as I honestly believe he has a long future ahead with Ireland, and I don’t see why the whole debate is being played out as if it’s some kind of “either/or” or “favouritism towards Leinster players” narrative.  I’ll also look forward to watching Blade get some much deserved game time in green.

And when it comes to welcoming newbies to the test arena, there is much of it to go around in this selection, with all four provinces having representatives with an asterisk beside their name on the team graphic.

Leinster have Harry Byrne on the bench.  Absolutely no doubt he has the talent to play at this level, though to be perfectly honest while I know he’s had some injury issues I still don’t feel like he has shown us his full potential in blue as of yet.  That said, if anything is bound to help get him there it’s this time spent in the Irish camp.

Ulster have the biggest contingent of new caps, which is fair reward after what was overall a good season with Timoney, O’Toole, Hume and Baloucoune all earning their starts at the top level.

But all that delight over the opportunities being present by Farrell & co only goes so far.  This is still a test match which Ireland needs to win comfortably and given these Eagles put some points on the board against England last week, this XV will have to play from the kick off if they are to match the 30-point victory expected by the bookies.

Key to this will be Joey Carbery.  Obviously there would have been more than a hint of poetry in handing the start to Jack Carty against his brother, but Farrell has bigger fish to fry.  With all Joey’s injury problems over the years plus the COVID break, you could argue that nobody needs game time in green more than him right now so it makes perfect sense he starts both of these matches.

Like I said earlier and in my Japan writeup, he didn’t have the best time in the first hour last week but he certainly deserves another chance to lead from the front like we need him to, and this is definitely a good chance for him to do that.

Maybe having Casey as his fellow halfback will help him settle and with a strong finishing back three plus a powerful Ulster centre partnership he has plenty of arrows in his quiver to keep the scoreboard ticking over.

In the pack, it’s hard not to notice the back row.  Putting aside the game time for Messrs Coombes and Timoney we can’t ignore the fact that Caelan Doris isn’t long at this level either but even more significant is the fact that all three are strong carrying number 8s so it will be interesting to see how they play.

The second row of Baird and Ryan has a real look for Leinster & Ireland’s future to it, does it not.  In fact it’s not just our back row that has been known to break a gainline or three; all eight forwards can do the heavy lifting so Carbery should have a lot of front foot ball to work off.

Obviously we’d completely write off the Eagles at our peril - the stock of the game over there is rising steadily and as I have said many times on these pages the game badly needs this sleeping giant to wake up.  Just maybe not this weekend, eh?

We need to win this convincingly and I believe we can, possibly by even more than the bookies are banking on.  Since Andy took over I have found myself pushing back against “popular” opinions on social media more than ever but I think I have to accept that if we win it won’t matter what the margin of victory is, it won’t matter that it would mean five wins on the bounce, it wouldn’t matter how many new caps he handed out, he’d still get the thumbs down from certain quarters.

So I guess I’ll just need to harp on my own opinions as best as I can and see where they get me.  Since I’ve vowed not to cover the Lions tour any further on these pages I suppose I’d better get as much mileage out of this series as I can get!!!

One more thing about this match, I noticed a tweet from Old Wesley RFC on Friday where they’ll be screening the action from the Aviva Stadium on screens with outdoor tables and waiter service - why don’t you check with your own local rugby club and see if they’re doing something similar, they could definitely do with the boost.

Whatever way you’re watching, be sure to follow me on Twitter throughout the match and no matter what your thoughts at full time please feel free to share them on the Facebook page.  JLP