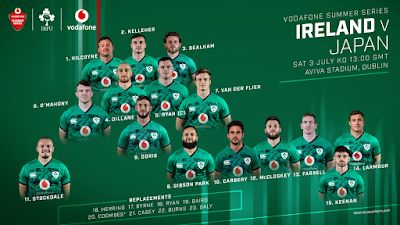 Hmmm....I very, very, VERY much doubt fans heading to the Aviva on Saturday will be complaining. And unlike Leinster's clash with the Dragons a few weeks ago where they welcomed back a limited number their own fans, this match promises to be a decent contest on the pitch.

With so many Irish players doing well at Murrayfield last weekend against this same Brave Blossoms squad, you could say that this makes for a "one-and-a-half-match" test series between Ireland and Japan, and although it's hard to believe just how long it has been since that fateful day in the Shizuoka Stadium, it still provides a whole lot of subplot to this fixture.

And then we get to the actual lineups. Japan will no doubt be looking to build on the strong final quarter they displayed in Murrayfield, and with talismanic number 8 Kazuki Himeno able to start this week, you have to assume they'll fancy their chances of at least defying the bookies' predicted 10-point home win.

But hang on - while the visitors will avvoid facing the likes of Jack Conan and Robbie Henshaw for the second week in a row, they're still up against a more than decent Irish lineup with plenty to play for.

First, a word on this notion we keep hearing about summer series and tours that "we need to give all the big players a rest in order to give some experience to younger players". Obviously this makes sense to an extent, but I'm not sure it's really quite as simple as that. For one thing, you can hardly blame a coach for wanting to field his best team at all times. But also I think we can forget that simply being in camp with the squad can be invaluable experience for the younger players.

When it comes to this particular match, the only new cap is Gavin Coombes and after the season he's had there's no doubt he deserves it. And while there are more waiting in the wings, it's possible to go overboard and besides it has to be said we already have quite a deep squad as it is so a balance has to be found between welcoming newbies to the test table and giving the already established second string a chance to move up.

It won't surprise you that the name I'm happiest to see on the Irish team sheet is James Ryan. Just a few months ago if you told me he'd be lining out on this particular Saturday I'd assume it would be down in Johannesburg but if it's not to be he's more than welcome here and in some ways it's a good experience for him in that he gets to lead the side out. He strikes me as a soft spoken, more "lead-by-example" kind of leader and it will be interesting to see how he gets on with the referee on the day.

Of course there are other leaders in the starting lineup, especially Peter O'Mahony. I was totally expecting him to be wearing the armband and it really does look like his career timeline has fallen in the wrong window for him to have the prolonged spell as skipper he'd be more than able for. Still, with Leitch, Lambuschange and Himeno providing the opposition, it's POM's back row skills that will be most required on Saturday, and along with JVDF and Caelan Doris it should be quite the battle.

In the backline we have another welcome returnee in Joey Carbery, and having Gibson-Park at 9 opens up a rake of attacking possibilities for us, providing of course our plan isn't to revert to another box-kick-a-rama, that is. Certainly wouldn't be horses for courses if that's the case.

With McCloskey and Farrell in the centre we have plenty of power up the middle although both appear keen to prove that's not all their respective games are about so we'll see how they get on. Whatever way they go about it, in Stockdale, Larmour and Keenan there's plenty of finishing ability so there's a lot to be excited about.

This is definitely going to be a challenge for Andy Farrell's side but I'd be confident we have the lineup to meet it. I'll be more interested in how we actually play - I know Carbery's career has come in fits and starts but it really is getting to the time where he has to seize opportunities like this and show he can comfortably pull the strings in a test arena. All due respect to Billy Burns but I'm hoping the plan is for Joey to play a full 80 in this one.

I expect Japan's defence to be a tough enough nut to crack and if he can manage to find a way through it early enough we could break through that 10-point prediciton. However with our opponents having had the extra week's run out I have a feeling it might end up a bit closer than that so I'm going for a home win by about 5-7 points, still with plenty of positives.

As always stay tuned to our Twitter account while the match is on and when the fulltime whistle goes, head on over to the Facebook page and leave your thoughts. JLP