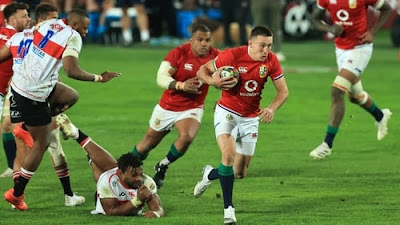 Of course I had to go and do the nerdy research to look up and confirm that "Sigma" is actually the 18th letter of the Greek alphabet.
That makes it fitting that they were so far behind this touring pride of Lions on the day in every respect and to be honest nobody was really surprised by the result.
However while those of us looking on might be forgiven for being a bit distracted for this tour opener, I do need to start my writeup by questioning both the organisers and the main broadcasters over just how seriously they took the occasion.
We all know South African rugby allows the actual naming rights of their clubs to be sold; this has happened for years. In general I try to avoid using the corporate moniker but for this particular match it came in handy to help distinguish between the two feline foes.
But here's the thing, this club from Gauteng province actually switched it's sponsor one week before the match, going from "Emirates" to "Sigma". I wouldn't expect you to have known that, and despite my persistent pedantry I might have actually forgiven myself for not knowing that.
When it comes to the official Lions website and Sky Sports however? Maybe not so much. Especially when this is a tour that many are finding hard to motivate themselves for, what with the lack of travelling fans and prospect of COVID cancellation forever looming in the background.
Yet here we had Sky presenters using "Emirates" several times in the build up. And even when they acknowledged the switch, I swear I heard someone say "the Simba Lions" more than once. Whether it was a slip of the tongue or genuine attempt at Disney themed pun-ditry, it doesn't exactly suggest they're taking this event very seriously, does it.
Then we had the match commentator's claim during the warmup that Iain Henderson was the only Irishman in the Lions' matchday 23. That also had two possible interpretations; one a bad mistake, the other serious shade being thrown on Bundee Aki's status as a project player. 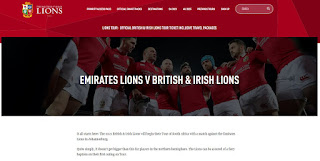 Poor opposition but still a good run out, more rugby in the legs throughout the squad. Did anyone "nail down" a jersey? Adams certainly didnt do himself any harm, Watson strong at 7 but still need another match in before we can really talk about a test XV IMO #LIOvBIL #LionsTour