This post is dedicated to the memory of Hazel Brown RIP 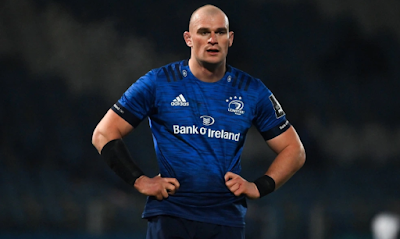 I'm still choosing not to harp on the Lions, so with the draw for the 2021/22 Champions Cup coming up on Wednesday I thought I'd do a "writeup of all writeups" post, a tradition of sorts that I started at the end of 2017/18 but for obvious reasons never got around to doing in 2020.

This 2020/21 campaign wasn't exactly straightforward either, but that said we were grateful to have any rugby at all to enjoy and while there were disappointments for the boys in blue along the way, there was also silverware plus a host of memorable performances from new faces as well as those not quite so new.

We're not that much into end-of-season awards here at Harpin Manor but what we did do was take an informal straw poll among our leading contributors and it wasn't much of a surprise that Rhys Ruddock was unanimously voted Player of the Year and that is why he is the lead photo.

So with this week's draw to come plus a newly rebranded domestic competition complete with some new opponents, there's a lot to look forward to and hopefully when I do this same post in 12 months time there will be more success for us to celebrate. JLP

“...to properly appreciate Gibson-Park’s contributions on the night I first have to offer an overall look at what he brought to the team.  Another criticism levelled at both Leinster and Ireland is that we’re too predictable with the ball, and the way he sped to every breakdown only to vary the point of attack each time, with the complete understanding of his team-mates I might add, made watching this match twice worthwhile all on its own.”

“...even though we saw 6 tries and 62 points from the contest, it wasn’t all that more interesting than Leinster’s last trip to Italy in this competition just under a year ago, which had no tries and just 3 points.”

“As impressed as I was by Dan Sheehan, both our starting halfbacks were always in control and I would have gone for Harry (Byrne) as Player of the Match were it down to me.”

“Luke McGrath and Michael Bent were good contenders for Player of the Match yet the eir Sport team were probably right going for skipper Rhys Ruddock who put on yet another powerful display, from number 8 this time.”

“I will double down on my opinion expressed last week about Rhys Ruddock.  He is in phenomenal form, with the ball as he muscles his way to gains every time, without thanks to endless tackles and jackles, and overall with top notch leading by example.  Pretty much everything you want from a skipper.”

“When it comes to the Pro14, we might be 30 for 30 in the match points column but the only stat that really matters is the slender 2-point margin we have ahead of the Ulstermen in 2nd spot so we will have to keep this run going to stay where we are.”

“Luke McGrath deservedly got the Player of the Match gong... he was definitely the glue that held us together and is also in a fine run of form.”

“...that was all with a lineup which didn't have anywhere near the amount of test returnees starting for us as we’d normally like to have at the start of a Champions Cup campaign.  Instead we were able to showcase some names that could well be pushing for the next level before long and still managed to remain in control pretty much from start to finish.”

“First Ryan Baird comes to the breakdown and spots that only the opposition halfbacks are in his path, so he doesn’t hesitate to take the ball himself and barge through the gap.  They try to get him down but his leg drive comfortably brings him a dozen or so metres; now we’re into their territory.  Gibson-Park quickly takes it and fires a pass right into the path of James Ryan going at full tilt...now we’re at the Northampton 10m line after 9 phases.”

“THE TOUGH GOT GOING”

“The only problem was that part of the secret to Leinster’s “beating anyone not called Sarries” success in recent years has been built on feeding this kind of youth gradually into the team and enabling them to hit the ground running.  For this occasion, we needed our overall systems to be working perfectly and they clearly weren’t.”

“The first half was overall a curious beast.  Ulster spent most of the time in our half like I said, but it was still Leinster who looked more like crossing, and we actually did on our only real chance thanks to Jamison Gibson-Park’s ability to fire a perfect miss pass parallel to the try line”

“Of course I can appreciate their frustration in falling short against the old enemy yet again...this very website was born in 2008 when I felt the exact same frustration the other way.  But wishing to break our hoodoo over them is not going to make it so.  They are definitely improving and if we play them again this season, it will no doubt be just as close.”

“With all their heavy lifting the Player of the Match award had to go to one of the forwards, although while Jack Conan did have a good outing, so did our entire starting back row and I would have gone for Dan Leavy, it’s marginal and Josh Murphy also impressed throughout.”

“I’m not so sure we learned too much about how well the Byrne brothers can work together in the same XV and there will certainly be a few things to go over on Monday morning but how could the blue-clad fans be anything but happy - indeed all four provinces finished on top this weekend and continue to dominate the standings.”

“in the end I thought we did pretty well coping with all the on-field chopping and changing and crucially nothing happened to our starting back row of Murphy, van der Flier and Penny, the last of whom deservedly won the Player of the Match award”

“...having outlined Ulster misfortune as best as I could, I can now point out the many positives that I saw on Leinster’s side, like the strong scrummaging, performances of youngsters like Penny and O’Reilly, and the top notch organisation of our defending right to the end.”

“...every time an Irish side dominates an Italian one, the same questions are raised about their eligibility in the competition but I have to say at this stage, those questions are becoming more tiresome than the thrashings.”

“FROM START TO FINISH”

“With two and hopefully three weeks of season-defining knockout rugby to come, this result could help the coaching staff get our focus where it should be starting from the very kickoff back at that same RDS next Saturday.  Here's hoping that's what happens.”

“While I want to respect the levels of disappointment that Munster fans must be feeling, at some stage you have to allow yourself time and space to be happy that a team you’ve devoted so much time to supporting over the years has won a major trophy - isn’t that why we do so much of said devoting?”

Champions Cup Round of 16

“Ross’ first job was to quarterback a lineout set piece.  We could have kept it in the forwards to let him bed in I suppose, but we have such confidence in him that we chose instead to send it straight out through the backs and...Ross had just the right amount of delay on his pass to Keenan who did the same himself in shipping it to Larmour and the winger made light work of what looked like a tricky finish.”

“...yes, it was a chance for other players to step up, and yes, they clearly failed to do this but the fact remains if this were a European semifinal then Munster’s team would have been pretty much the same, while Leinster’s most certainly would not have been.”

“...then Will Skelton and brushed past Ryan Baird.  I mean really ploughed through him.  And this certainly isn’t meant to criticise Baird.  If anything it’s a compliment because it shows just how unstoppable the massive tree of an Aussie was getting as the match wore on.”

“Our lineouts have literally been “hit and miss” this season but once they hit consistently, we have been able to do a lot with them and this match was no exception.”

“There’s the matter of the “Captain’s Challenge”...its implementation has been a shambles so far in this competition and this match highlighted that more than anything.”

“The way I saw it, after weathering an early storm we took control of the scoreboard, a situation we are well used to, yet while the bonus point victory we required to stay in the competition was within our reach all the way up to the final quarter, we were unable to get the job done.”

“SOMEHOW OVER THE RAINBOW”

“So that was it for the perfect evening of rugby where we got to say hello to some faithful supporters who in turn got to say goodbye to some of their heroes, thus bringing the curtain down on a far from usual, yet still full of positives, Leinster campaign.”