We're starting to turn into Anti-Lions Tour Central here at Harpin Manor; shortly after I posted these thoughts on Thursday I received this contribution from our Munster & travelling Lions fan correspondent Michelle Tobin.  I have also since been reminded of a post penned all the way back in 2013 by Curates' Egg offering a set of pre-COVID objections to the concept.   Together they hopefully cover the broad range of concerns about the future of the tour as seen by genuine rugby fans.  JLP 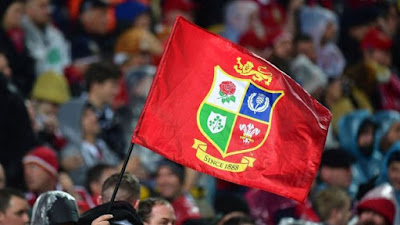 It’s well known that I have two passions, rugby and musical theatre. Every time I see another article or tweet about the latest issues for the Lions Tour I hear Colm Wilkinson’s voice singing “Bring them home, bring them HOME” – les miserables indeed!

My love for the Lions began with the incredible 1997 tour of South Africa. I watched all of those games over and over again, I owned all of the “Living with the Lions” videos – remember VHS? It was quite traumatic when I had to consign those to the bin, over a decade after I last had a working VHS player. On one of the flights to NZ in 2017, I was overawed to hear that one of our group had actually been on that 1997 tour – I’m not sure he could believe my excitement.

And so, the next Lions tour after #mylionsadventure in New Zealand in 2017, South Africa 2021 was something I looked forward to since we landed back in Dublin from NZ. And then, you know, Covid.

If you’ve listened to my podcasts on here you’ll know that I, like many others, was frustrated with the lack of regard Lions Officials seemed to have for the thousands of supporters who had invested five figure sums in plans to go on the tour. I was lucky, Rugby Travel Ireland kept us in the loop as much as they could and as often as they could. Several months ago, I knew I wasn’t going to South Africa, a relief to have closure at last. But the rugby was going ahead??

Randomly, I have a degree in immunology, but you didn’t need to be a scientist to see that the plans to go to South Africa and play the planned eight matches was not the sensible option. There had been talk of relocating the games, New Zealand, Australia, Dubai were all mentioned as was a proposal to play the games across Britain and Ireland. All were ruled out, or vetoed, for various reasons but the bottom line really is the bottom line, it’s all about the money.

And so the squad and management team boarded flights to South Africa, aware that this was to be a tour unlike any other. We all saw the images of temperatures being taken at the SA hotel, and all the luggage being disinfected, window dressing it turns out. Wednesday brought the revelation that some of the hotel staff at the hotel when the Lions first arrived had tested positive for Covid, and that it suspected that that’s how there were positive Covid tests in the Lions camp. You couldn’t make this up!

The Lions Tour Bio-Bubble rulebook is available for all to see. It clearly states that only staff residing in the bio-bubble may access team areas. Yet the positive tests are being attributed to hotel staff?

And so to Wednesday’s game. Positive tests in the Lions camp? Who? How? What happens now? Well what happened as we know was the game was played, requiring some players to play their third game in less than two weeks, a bench with only one back (where was Peter O’Mahony when we needed him!), and a set of jerseys that ended up being as much of a talking point as the rugby. The result was never in doubt, the best available players from the home nations v a team stripped of their internationals. Though the Cell C Sharks played some great rugby at times, and their try was a thing of beauty, they were never going to challenge. But it seems they’re up for a second bite of the cherry this weekend – there are not enough rolleye emojis in existence to give my reaction to this news. It’s rugby for money’s sake alone. Money, money, money.

The broadcasters and sponsors are already down a fixture this weekend with the Springboks v Georgia being called off relatively early this week. At that stage we only knew of the many cases in the Springbok side, so a slightly tasty game v Georgia looked like a possibility given Bulls hadn’t even made it into their bio-bubble for our original Saturday game, but positives in the Georgia camp nixed that idea. So then there was a major push to find opposition for the Lions for this weekend, God forbid we would be down two big fixtures this weekend. And so we face the Sharks again (pending negative tests), I’m guessing I’m not alone in being “unenthusiastic” about this fixture, and indeed the tour.

I tweeted earlier this week that fears for the Lions brand had prevented the tour cycle being pushed back a full four years, but the damage that may have done is nothing compared to the damage being done to the brand with what’s going on. I stand by that assertion. I know a lot of passionate Lions supporters who are disappointed, disillusioned, disenchanted. I’m one of those. Anyone who read my 12 blog posts from New Zealand in 2017 will know how passionate and excited I was, and how much I loved every minute of that tour and looked forward to this one, until the writing was on the wall, this tour was going to be like no other, and not in a good way.

On the “Harp Off” podcast last week, Keego made a great point (no not the red underpants one!) about what happens if a Lions player breaks a bone, or gets sick and needs to go to hospital. We’ve seen the news reports about the chaos in South African hospitals, clearly unable to cope with the massive surge of Covid cases. Even the thought that one of the Lions players might have to go into such environments terrifies me. Why are ok with that possibility? Why are we ok that the Springboks jumped the queue for vaccination so that they could play these games, just 0.8% of the population of South Africa is fully vaccinated. Is our entertainment, our sport, so important?

As the days go by I’m becoming more and more uneasy about this tour, one I wasn’t happy to see go ahead in the first place – it’s not a real Lions tour, the players are putting on the jersey, but they’re not getting the full Lions experience, the sea of red who’ve travelled from the other side of the world to support them, the magical buzz of a tour that combines rugby and enjoying the beautiful host countries. They get masks, a bio bubble, Covid tests, stress, and risk. Waiting another four years would not have been the end of the world, with an average age of 28.5 most of these players have time.

A number of pundits, former players and journalists have come out on the morality of the Lions tour going ahead. And I totally get it, I totally agree. Sadly an article in the Times (UK) last week nailed it “Money, not morality, will ensure that British & Irish Lions tour reaches the Tests against South Africa”. In black and white it laid out why the right thing comes secondary to the bottom line. And it breaks my heart, the Lions I love are about community, passion, and compassion, but it turns out it’s all about the money.

Regardless of what the article says, I don’t think we’ll get to the Tests, we shouldn’t. Finances aside, it’s in nobody’s best interest for this shambles of a “tour” to continue. Bring them home, please, bring them home.

Michelle Tobin (@CorkSeashell) : A passionate Munster, Ireland, Lions rugby supporter. Known to get up in the middle of the night to watch live rugby, she is also a big Auckland Blues fan - though not a natural supporter of teams in blue! Having written match day experience and contract posts for this blog, and her 12 Lions diary episodes in 2017, she finally started talking rugby on the HoR podcasts in 2020 and hasn't stopped! She is not sure she will ever get over CJ Stander's early retirement