Some thoughts on the United Rugby Championship 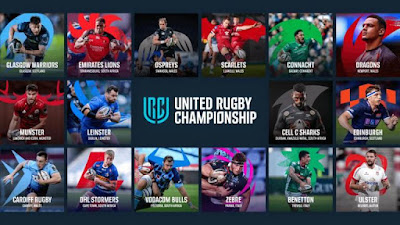 Right - the Pro16 rebrand dropped on Tuesday, we’ve all had a few days to let it sink in...now I think I’m ready to go on a ramble to offer my two cents.

First, I want to give you an idea where I’m coming from.  Yes, I’m primarily a Leinster & Ireland fan, as you can probably tell from the existence of this site.  But when it comes to discussing competitions and their structure, I believe you have to look at it from a wider angle.

So this is why I’m going to feed off this article from Gerry Thornley, posted the very next day after the announcement, to give my opinion.  Apologies if you can’t get at it because of a paywall, but essentially it summarizes the Irish view against the new formation.  The title is “No room for a level playing field in rebranded rugby championship” and the very first words are “The main flaw in the rebranded United Rugby Championship is…”

Does this mean my goal here is to try to convince you that the playing field is perfectly level and there are no flaws in the URC?  Of course not.  Instead I’d rather swim in the shades of grey than sit on one of the extreme sides afraid to so much as dip my toes in.

For starters...what is this entity we’re talking about?  It’s a domestic rugby competition which has evolved over 20+ years from one which was originally designed to give Welsh, Irish and Scottish clubs week in week out rugby on a level similar to that they enjoy in England and France.

[Sidebar...it is here where I want to bring up the oft-mentioned ideas like a “British and Irish” or “Anglo-Welsh” League.  IMO we really need to let both of them go.  They’re no more a possibility today than they were back when we had to form the Celtic League in the first place.]

Right...so the league came into being, starting with the baby steps of a short season, “two pools leading to playoffs format”, but eventually a 12-team round robin system was put in place to look a lot more like the Premiership and Top 14 and ensure rugby throughout the season.  As we all know, Italian teams soon got added to the group and a few years ago, we began to welcome South African ones as well (both paying cash to the original three each year in the process that’s a critical point).

This gave us a league that spanned five different rugby unions, and to say that each has their own unique situation would be a gross understatement.  But one feature that has been similar to all of them over the years is that to varying degrees there has been a struggle to keep the same amount of clubs going in the competition, mostly for financial reasons.

South Africa started with two clubs then went with a different set of four, thus leaving at least one of the originals in limbo.  Italy had just one organisation with a strong foundation so had to manufacture a second which is currently on version 2.0 based in Parma.  Scotland went with three franchises to begin with but eventually had to shore it down to two.

Then there’s Wales, and for this article I really want to avoid the swell of opinion over there against this league no matter how it is branded, but for this paragraph I’ll point out that they seem to have had the most problems when it comes to creating popular identities for their regions.

But let’s not forget, even Ireland hasn’t been free from this altogether.  In one sense we were lucky in that we never had to “create” franchises - there were four ready-made provinces which meant where you were born kind of acted as a “sorting hat” for your allegiance to begin with, thus making marketing a lot easier.  Still, we all remember that time when there were serious discussions taking place about the viability of sustaining a professional team in Connacht and thankfully we were able to find a way to work things out.

And here is where the problems lie when it comes to the makeup of the league.  Yes, Irish rugby was able to make a four-team set-up work, so much so that since restrictions on European qualification were lifted we have gotten all of them into the Champions Cup many times in recent seasons, including this one.

Naturally as a fan of egg-chasing on these shores I think that’s brilliant.  But do we really think it’s sustainable?  If you were asked to chip in for a meal every day with four of your mates and one guy was eating the finest steak each time while you and the others made do with pre-packed sandwiches, would that make you want to keep the arrangement going?

This is where Thornley’s “lack of level playing field” argument is a bit misleading.  Because from an Irish point of view, that’s not really what we’re asking for, is it.  What we actually want is a preservation of the status quo because as recent seasons have shown, it means we can maximize our slice of the Champions Cup pie (mixing my food metaphors I know but you get the idea).

Sure, you can make the argument that “why should we be punished when we’re doing things right, well maybe the other unions should focus on getting their own houses in order” and that’s definitely valid, but only to an extent.

His key point is about "the casual fan which is the market they're going for". Many don't seem to get this.

The video clip shared by Andy McGeady above gets to the heart of the discussion for me.  You’re reading a rugby blog right now which means you’re as much of a nutter about the sport as I am.  If there’s a game on, especially one involving our team, chances are we’ll watch it without bothering too much about the presentation of the actual tournament it’s in.

But those are details that matter to the casual fan as described by Mr TwoCentsRugby.   I have often written on these pages on the distinction between someone who goes to Leinster matches looking to talk about soft shoulders and strong benches while for many more, they just want to cheer for their home team for a couple of hours and have a few pints. Like it or not, the league needs both to be willing to go to their pockets.

And great and all as it has been to see attendances at such a good level proportionately across the four provincial Irish grounds before the COVID times, the same definitely can’t be said elsewhere, and if your goal is to maximise Scottish, Welsh, Italian and South African bums on seats and eyeballs on screens as well, you’re not going to do it if those some of those nations are perceived to be our whipping boys.

I have harped on this from the very launch of this site and I even brought up the idea of regional pools back in 2014.  And again I must point out that of course I don’t think it’s in any way ideal.  It’s just that if you fixed all the drawbacks as outlined by Thornley, a whole slate of different ones would pop up and you’d end up playing Format Whack-A-Mole without ever coming up with a solution.

Which leaves us with what we have.  16 clubs, playing 18 matches each, leading to quarterfinals.  Everyone does play everyone else throughout the campaign (something that wasn't guaranteed in the two-conference Pro14 era I might add) and the home and away derbies are protected.  To those who say the schedules are uneven I say either “that’s the price of compromise” or “that’s the price of doing business” depending on who I’m speaking to.

When it comes to South African teams in Europe, again I refer you to my steak argument from earlier.  We want them to join our domestic league.  Why should we limit the troughs they can feed from? Besides, looking at it from their side, why wouldn't they make that a deal breaker?  Also, are we really going to get hung up on the "geography mis-nomer" thing?  Australia put a song in the Eurovision these days for pretty much the same reason - mutual interest and necessity that supersedes labels.

On the ringfenced qualification for Europe, I’m also in favour of that when I’m not wearing the green goggles.  Maybe some will think this has more to do with my blue ones because it probably won’t affect Leinster, and if it does happen that someone like Connacht fails to get in at the expense of another club which either got fewer points or had fewer tough matches I know that’s going to be hard to take.

But again I’ll say - if we insist on this league being tailored specifically for our teams, we simply won't have a league at all.  Besides, with unions having a veto (perhaps the Italians spell theirs with an “i”?)  there’s a strong chance things will change after two years so we’ll have to see.

I guess what I want to say in conclusion is that maybe for these next two years as Irish rugby fans we can accept the negatives while being able to look past them and remember the many positives that are there as well?

Like the end of the “Pro Whatever” era, the definite extra competitiveness provided by the South Africans, the major increase in free to air rugby and, as pointed out by Mark Jackson on our podcast this week, with provinces, especially Leinster, forced to field stronger lineups, perhaps more fringe players can get some game time in the AIL thus giving it a much-needed boost?

We have two whole seasons to test this United Rugby pudding for some proof.  I say grab a fork and give it a chance.  JLP