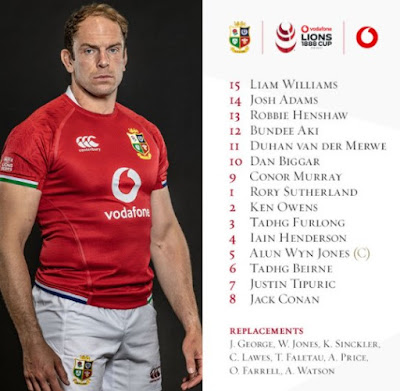 We’ve been harping for so long on these pages this is actually our SECOND Lions Tour of South Africa, although naturally this one is very, very different to the 2009 version which kicked off with a 37-25 win over a “Royal XV”.

Obviously a whole lot has changed since then.  For starters there would be something wrong with me if I didn’t bring up that the 2009 version started a week after Leinster’s first Heineken Cup triumph.  And not only were our players missing from the Lions lineup in Rustenburg that day, so were the Bulls’ contingent - they were busy hammering the Chiefs in the Super Rugby final and as we all know, they’re now recovering from a final hammering of their own in a completely different hemisphere.

Let’s not forget that another difference is that we can’t really call it a proper “tour” because that word is meant to include to red army which sadly won’t be making the great journey south.  And I must say that even without those pesky COVID restrictions my personal enthusiasm for the Lions seems to decrease with each four-year cycle…

...until the actual matches themselves come around, that is.  Let’s face it, I love rugby, I love Leinster rugby and I love Ireland rugby so by extension I have to love Lions rugby and there is a whole lot about this fixture on Saturday to be excited about and once I’ve watched this, I’ll no doubt be as hooked as anyone all the way up to full time in the Third Test.

First we have the fact that this series opener is taking place in unusual places both live and on telly.  BT Murrayfield provides the very un-Lions-like venue while Virgin Media Sport and Channel 4 provide the free-to-air coverage which is definitely a good way to tempt the kind of sports fan looking for a curtain raiser to the Euro round ball knock outs.

Meanwhile for the likes of you and me who clearly see this clash with tha Brave Blossoms as the main feature, we have a starting XV which definitely doesn’t hold that many surprises given the identity of the head coach.

First, a word of sympathy for the brace of Socts who had to withdraw from the starting lineup, hopefully both Hamish & Zander will be able to feature when the actual travelling begins.

But that leaves us with an even stronger Leinster representation with Tadhg Furlong joining Robbie Henshaw and Jack Conan and with Bundee Aki, Conor Murray, Iain Henderson and Tadhg Beirne also starting there’s plenty to shout about.

That Aki/Henshaw pairing is definitely one that could be perfectly suited to Warrenball and with more beef in Duhan on the wing, the Welsh connection of Biggar, Adams and Liam Williams plus the experience of Murray there are options aplenty for the Lions backline.

In the pack, while it was of course amazing to see Jack Conan included in the squad it rises to another level again when he gets the chance to show what he can do at number 8 in the very first outing.  Clearly Toby on the bench would be the front runner for the test team but who’d bet against Jack being nimble and quick enough to jump over him.

Another who will could have a stand out day in Edinburgh is Iain Henderson.  He has looked the part in the Lion ever since he first broke into senior rugby and even though he is playing alongside the tour skipper here I’d be surprised if he were overshadowed.

Maybe Tadhg Beirne’s career path has been slightly different to Hendo’s but he’s no less worthy of his shot on this tour and I expect him to have something of a snaffle contest with Tipuric throughout this one, albeit against a very competitive Japanese back row.

And while we’re on the opposition lineup while their coach Joseph is trying out some new faces as they hope to build on the 2019 success (not a lot of test game time for them since then) there is still a lot of names we’ll remember from that talented group including Leitch, Matsushima and Tamura.  They definitely won’t make things easy for us, that’s for sure.

It was interesting how the two enforced changes didn’t make Warren alter the bench which would suggest he has specific plans for some of them to get some game time towards the end.  Clearly all eight of them will be able to make a difference but if I’d expect one to provide a “YouTube moment” it would definitely be Watson.

The bookies have the Lions winning by a 20-point margin, that sounds about right to me, but the most important thing will be to get players out wearing the famous jersey and playing some rugby.  After taking a few days off here at Harpin Manor, I’ll be going all in for the duration with previews, writeups and more of the “quiz-style” podcasts like the last one so be sure and stay tuned and also to follow us on Twitter as well as leaving your full-time thoughts on the Facebook page throughout.  JLP 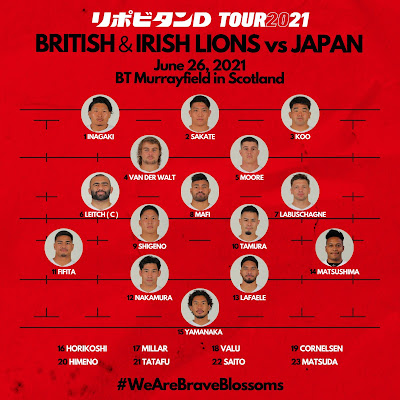