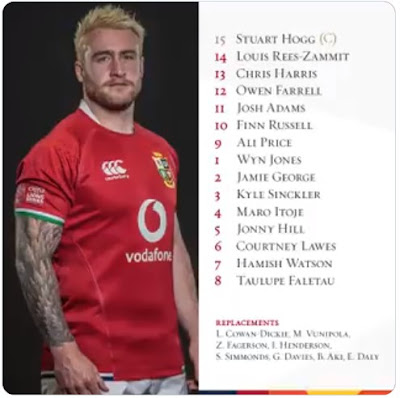 There I was all set to kick off this preview by pointing out the way to distinguish between this pair of Lions as "Emirates" and "Tourists" when I realise the home team has just been changed to the "Sigma Lions". Hey it's all Greek to me.

By rights I suppose I shouldn't really care about this match until Warren goes to the bench but I have to say there's plenty to be interested about. First after losing the tour captain and nominating a replacement, we go with someone else altogether for the very next match but it's certainly a role Stuart Hogg can do well although after Liam Williams impressed at 15 last week, it should be more about the performance on the day.

Another Scotsman who will be keen to get a performance under his belt will be Hamish Watson who was unlucky to miss out at Murrayfield and is tipped by many to be in contention for the 7 jersey when the tests come around. No better test for him against what is no doubt going to be the first batch of beefy back rows to be faced on this tour.

And the Caledonian connection continues at halfback where it will be very interesting to watch the enigmatic Finn Russell pulling the strings for a Warren Gatland XV, especially with Owen Farrell outside him. Once Finn clicks with his team-mates I'll be expecting much from this backline especially with Adams and LRZ manning the wings.

Up front things will no doubt get interesting. The home side have an unspoken remit to be sure and lay out the "welcome mat" for the visitors and if things become, er, "tasty", there's plenty of characters to stand up to it like Lawes, Sinckler & Itoje. Hopefully they'll all be able to keep focused on the task at hand and keep providing good platforms for Russell to do his thing.

Apart from roughing us up I can't claim much knowledge about the home side - I did harp briefly on them after they overcame the Bulls in the Rainbow Cup but how much is that going to tell us? The tourists should by rights put them to the sword pretty handily but a lot will depend on a good start.

The Irish contingent is limited to Henderson and Aki on the bench and both will be keen to build on impressive outings against Japan, though I have a funny feeling this match could well be over as a contest by the time they take to the pitch.

Bookies have a 27-point margin of victory and that's a decent target which we should just about meet, once we can keep fifteen on the park throughout as discipline could be the only thing to slow us down.

I have a feeling the non-die-hard viewers might find themselves flicking over to the Euros before this match is over but assuming you'll be there for the long haul be sure and pop over to my Facebook page after the full time whistle to leave your thoughts. JLP