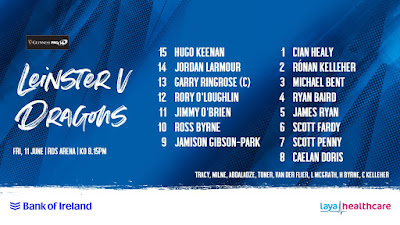 “Obviously threats to a rugby schedule are the very least of our fears regarding COVID-19, but whatever happens in the near future, this will be remembered as an amazing time to be following a rugby club with so much talent all the way down to the third string and beyond in so many positions.”

It was Friday, February 28, 2020.  As always on evenings like this I packed my bag and set off for the RDS for Leinster’s Pro 14 fixture against the Glasgow Warriors.

There may not have been a completely full house on the night, but the atmosphere was...well, to be honest with you I can’t really tell you exactly how it was.  Why?  Because like everyone else I was totally taking it for granted.  As you can see by one of the closing passages from my writeup, while I knew some disruption was on the horizon, I had absolutely no idea what was just around the corner.

If you had told me that it would be 469 days until any fans were allowed back to Leinster matches, never mind all the mask-wearing and testing that have become standard, my reaction would’ve been “Ah no, sure this corona thing will be all forgotten by then”.

Yet here we are, and while I have been to a match since then, ironically against the same opposition exactly one year later, but with no crowds it just wasn’t the same.  Now, with over a thousand blue clad supporters set to go, a vaccine working its way around my system and the weather promising to behave, tonight is the night we get to start the journey back to what I had been taking so much for granted.

And hopefully I won’t disrespect the Men of Gwent too much when I say I doubt there has ever been so much hype from Leinster fans over a visit of the Dragons.  On top of that, as far as the Rainbow Cup is concerned, this is meant to be a “dead rubber”.  I think I can safely speak for the entire 1,200 that there’s plenty of life in this, er, rubber, ahem.

We haven’t even gotten to the lineups yet.  One of the stars of that 2020 win over Glasgow was Scott Fardy so it is more than fitting that he takes his final bow tonight.  Sharing the spotlight with him that evening was his fellow lock Ryan Baird and that epitomizes the immeasurable value the Wallaby has brought to the squad.  His mere presence would have had a positive influence on everyone, not just the prospects.

And having officially come to the province as a lock, there’s something poetic in his being able to sign off wearing his more recognized 6 jumper, with two more of those prospects alongside him in Penny and Doris and behind what could very well be our more long term lock pairing of Baird and James Ryan.

Then there’s Michael Bent.  So much has been said of him from Leinster fans there’s not much I can add but I’ll try anyway.  Technically he arrived on these shores to play for Ireland yet while that didn’t quite pan out, you simply cannot put a value on a reliable tight head that can play for your province throughout the season and he has held that key role for the best part of a decade.  If being there to watch Leinster rugby is the cake tonight, then being there to wish Scott & Benty farewell is very much the icing.

And let’s not forget Cian Kelleher, who will be coming to the end of his second spell at the province to no doubt provide more powerful finishes for Ealing like he did just last Friday in Scotstoun.  Plus we have some players to welcome back  from a spell on the sidelines, not least Jamison Gibson Park, who was player of the match for the opening match of the 2020/21 campaign, also against the Dragons at the RDS.

More welcome returnees should appear from the bench in the form of Vakh Abdeladze, who will hope to at very least a long term replacement for Benty, and Harry Byrne, who really could have done with more game time in this Rainbow Cup series.

The boys in blue will be led out tonight by Garry Ringrose, and once again he has a very attacking back line around him which hopefully will be able to respond to defensive tweaks by the opposition more than last week, and I see no reason why we shouldn’t.

On the Dragons side of things, they seem to have sent a pretty strong lineup and having watched their last outing against Glasgow, my attention is most drawn to their centre pairing.  Playing the 12 role last time out was young Aneurin Owen and he really impressed as a carrier and should have no problems shifting over to 13, especially to allow for Dr Jamie Roberts.

Elsewhere halfbacks Williams and Davies will keep them going and no doubt the likes of Ross Moriarty will be mixing things up at the breakdown.  Plus keep an eye out for the new “barnet” on Richard Hibbard when he’s sprung from the bench.

Perhaps officially the result doesn’t matter, but let’s face it - for multiple reasons we want a comprehensive display from the boys in blue tonight.  And it seems the bookies believe we’ll be up for it as they’ve put the spread at a challenging 28 points.  With the support and the desire to send some great Leinster legends off on a positive note, I reckon we can rise to that level tonight.

If you’re lucky enough to be there, be sure and share as much of the experience as you can, not to make everyone jealous….well, ok, maybe a bit for that...but also to whet the appetite for what will hopefully be a return to what we were all used to come the start of next season.

As always you can follow me on twitter throughout the match and be sure to head to the Facebook page after the full time whistle to leave your own thoughts.  JLP