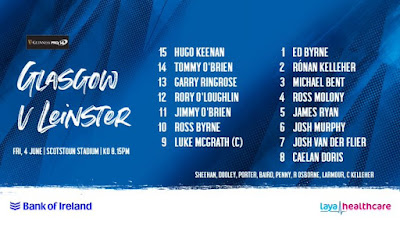 This obviously goes without saying but I’ll say it anyway...fun and all as two weeks of mini-writeups was all well and good but it’s great to be back harpin’ on Leinster Rugby again, even if it is just for the two weeks.

Or could it be three?  Well it’s not often that a team lying 7th in a group of 12 still has a chance to finish 1st with just two matches to go, but I’m pretty sure nobody in this league will rule out Leinster’s chances until it’s mathematically impossible.

This day last week I worked out all the maths but after the four matches from last weekend that needs some updating.  First, obvs, we have to win against both Glasgow and Dragons with maximum 10 pts and by as wide a margin as we can manage.  Not easy at all, but doable.

Where it gets really tricky is in the favours we need from elsewhere.  Basically we don’t want anyone else to reach 19pts or at least if they do, give us a realistic chance of catching them on points difference.  Although we’re 7th as things stand right now, there are only 4 clubs ahead of us who can get to 19.

The easiest to knock off that list is Glasgow as we play them tonight.  But before that match kicks off, Connacht can help us a lot by beating the Ospreys in the Sportsground.  Victory for the Welsh region wouldn’t end our chances but it would make them very messy.

Next we need help from Zebre who will host Munster next Friday evening.  Any kind of a win by our southern cousins will more than likely put them out of our range but if they get 3 pts or less we could be in with a shout.  Then finally, assuming all other results have gone our way, the Ospreys will go from foes to friends as we’ll want them to beat Benetton.

Yeah, I know...there’s a hell of a lot in that perfect storm, eh?  Still, I don’t know about you but whatever you want to say about the Rainbow Cup, as long as we’re in with a shout of reaching the final, I want us to compete so my bare minimum expectation from tonight’s match in Scotstoun will be that we go for the bonus point win and then we can take it from there.

And to be fair we seem to have selected a team capable of doing it.  Luke McGrath leads the side out making his 150th appearance in blue and we’ll need every ounce of his leadership to make sure we get the most from this fixture, including of course use of the infamous “captain’s challenge” which went a bit SNAFU at the end of the Ulster match last time out.

It’s great to see Ross Byrne lining out alongside him in a time of out half shortage for Leinster and hopefully the fortnight’s rest will mean he can return to his placekicking duties.  I’m assuming Garry Ringrose will do the honours if not and perhaps will also slot in at 10 should Ross be forced off, though Jimmy O’Brien has been called upon before.

Overall our starting back line looks very strong.  Tommy O’Brien really impressed in his prolonged shift against Ulster and we can expect a lot of creativity from our back three throughout with Larmour and Kelleher waiting in the wings.

In the pack I’ll be expecting nothing less than perfect lineout platforms courtesy of Messrs Molony & Ryan supported by a rather unusual sight in a Leinster starting XV - the exact same back row named for two matches in a row in the two Joshes & Caelan Doris.  We’re not too shabby in the bench department here either with a Lion in Porter as well as Ryan Baird and Scott Penny.

Now even without having watched the Warriors’ win over the Dragons last weekend I knew we couldn’t take them for granted, but since I did see the full 80 minutes I can report that they are playing some decent rugby and possibly should have won that match by more.

The fact that Adam Hastings has gone to full back is probably a good illustration of how much faith they have in young Ross Thompson at 10 and he did a good job leading their attack which played with a lot of confidence and physicality and another prospect was their openside Rory Darge.

We’ll know a lot of the names in their side well, all the way through the squad to number 23 Niko Matawalu,  and they’ll be looking to put in a good show against the champions in their final home fixture of the season.  But if we can establish our own game early, we should be able to get a foothold and from there it’s all down to our own levels of accuracy.

The bookies have us winning by 11 but we’ll need a good bit more than that.  It won’t be easy but like I said I at least want to see us going for it.  Surely every penalty has to be put to the corner or if from close range then tap n go.  And the lineout options will have to be varied because the maul won’t work all the time.

I’m going into this with a good amount of confidence, which I hope is a good thing.  With some fans returning to the RDS next Friday (best of luck to all those in the lottery), I’m backing the boys in blue to prevail by 15-17 points though much like the maths required for us to finish first, we’ll need a lot of things to bounce in our favour.

Here’s to a great Friday evening double header - as always follow me on Twitter throughout and leave your thoughts on the Facebook page after the full time whistle.  JLP