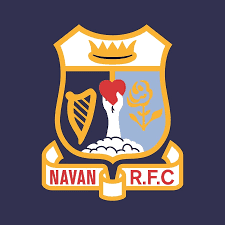 This week we will travel to County Meath to take a look at Navan RFC. The club was founded in 1924 and its original home was at the County Show Grounds as one of the founding members, Willie Sullivan, was President of the Meath Agricultural Society. These grounds were shared with Navan O’Mahonys GAA club. From these humble beginnings, the club won its first trophy with the 1929 Ryan Midland Cup. A few years later, they reached their first Towns Cup final but lost out narrowly to Carlow who kicked a last-minute penalty. This pioneering team was captained by Pappy Russell and managed by WM Kirk.
The club struggled in the years just before and after World War Two which culminated in losing its grounds and pavilion in 1962. This was very nearly the death knell for rugby in Navan but the club was able to purchase grounds on the Dublin Road and opened their new facilities at Balreask Old two years later. This was thanks in large part to some of the most sought-after social events in the country including the St. Stephen’s Day game and social event with big clubs such as Wanderers, Lansdowne and Clontarf providing opposition.
The 60s was actually a very fruitful decade for the club with six McGowan Cups and three Towns Cups while making two more finals of the latter in 1970 and 71. However what followed was a rather barren spell. The trophy-less spell was broken with a 1981 McGowan Cup success.
The 70s was not all negative as the club formed a youth section which formed the foundation for future success. In 1988, another Towns Cup was won and the club contested some of their first Senior games before winning the Towns Cup again in 1990. 13 of the 15 that played that day came through the youth section which, combined with the modern and scientific coaching methods introduced by the likes of Dick Brady, Leo Finlay and Michael Murray, was bearing fruit for the club. 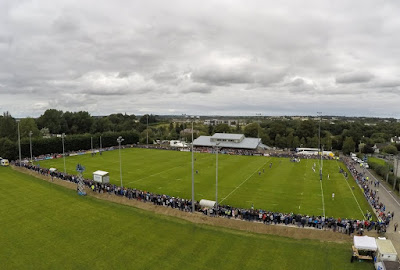 Navan retained the title the following year with a victory over Athy before Carlow dominated Leinster Junior rugby, disposing of Navan in the 1997 Towns Cup final and subsequently winning promotion to the All-Ireland League. The end of the 21st Century was an eventful one as another Towns Cup was captured in 1999 in the same year a state-of-the-art clubhouse was completed. It was officially opened in April 2000 by IRFU President Bill Lavery and comprised of three floors with changing rooms, a weights room, medical room and a bar and function room.
The Towns Cup was retained in 2000 as ex-Queensland and Australia U21 captain John Mulvihill coached the side to back-to-back titles. The following year saw a Leinster Junior League 1 title but defeat in the round-robin tournament meant All Ireland League rugby would have to wait. Mulvihill left to take up the assistant coach role at Western Force in Super Rugby and was replaced in 2006 by another Australian in Brad Harris who was player/coach assisted by New Zealander Ryan Roberts.
The pair guided the club to another back-to-back Town Cup success in 2007 and 08 and the latter of these was accompanied by an All-Ireland Junior Cup. Navan were knocking on the door of All Ireland League rugby and finally made the breakthrough in 2009 after defeating City of Derry, Cashel and Monivea in the round-robin.
More success came throughout the club in the following years with the youth and women’s section bringing trophies back to Balreask Old which celebrated its 50th anniversary as the club’s home in 2014. Two years later, after the restructuring of the All-Ireland League, Navan were placed in the bottom division 2C. Since then, the club has rocketed through the leagues with three promotions – most recently in 2019, defeating Queen’s University in the Division 2A playoffs – to leave the club in Division 1B for when club rugby resumes. Head coach, Ray Moloney and club captain Conor Ryan will look to add to Navan’s recent success in the near future.
For more information check out the Navan RFC website here
Links to previous profiles...
Clontarf RFC, Dublin University, UCD, Lansdowne,
Terenure, St Mary's, Blackrock, Old Belvedere,
Cork Con, Buccaneers, Ballymena RFC, Garryowen,
Old Wesley, UCC RFC, Banbridge RFC
Mark Strange (@realmarkstrange) : I am a freelance sports writer who has been published in soccer, rugby and baseball. I am also an avid fan of ice hockey and just returned last year from a year living and working in Vancouver. I previously played and was PRO for Randalstown Rugby Club before a knee injury cut me down in my prime! I became a Leinster fan when I was younger due to a certain Felipe Contempomi and I am the only blue in a sea of white in Ulster.
*****
Want to see your own rugby opinions on the web?
Click "Write for us" in the sidebar to find out how.