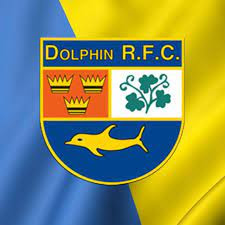 This week we take a trip to Cork to look at one of the most uniquely-named clubs in Irish and world rugby in Dolphin RFC.  The origins of their name came from the Dolphin Swimming Club in the city as it was members from the club who founded the rugby club in 1902 with the aim of giving members a winter pursuit.
The club’s first trophy was won in 1913 with the capture of the Munster Junior Cup and, a year later, admission to the Senior ranks of Munster Rugby was applied for and granted but the outbreak of the Great War meant this would have to wait.
In its early years, the club was slightly nomadic, starting at Ferry Walk, which later became UCC’s grounds at The Mardyke before moving to Church Road in 1913 where they remained for eight years. A move to Ballintemple Village followed where changing and social facilities were provided by Murphy’s Pub around a quarter of a mile from the pitch. A move to their current home at Musgrave Park came about in 1942 and they have stayed put ever since.
A first Senior Cup was won in 1921 and in their first season at Musgrave, Dolphin won an unprecedented clean sweep capturing the Munster Senior and Junior Cup and the Cork Junior and Minor League and Cup doubles.
On the international scene, the club has been well-represented throughout the years from Michael Bradley who was the club’s first international in 1920 and first Lion four years later to the present-day where the Scannell brothers, Niall and Rory don both the red of Munster and green of Ireland having worn the navy and yellow of Dolphin. They are the first Munster siblings to play together for Ireland in the professional era.
Other notable internationals include Michael Kiernan - who joins Bradley and JS McCarthy as men who have represented the British and Irish Lions while playing for Dolphin - Terry Kingston, Tomas O’Leary and James Cronin. Former Ireland coach Declan Kidney played out half and coached the club too as he followed in Mick Doyle’s footsteps as clubmen who coached Ireland.
It is not just Irish internationals who have come through the ranks too as both John Quill and Paddy Ryan have represented USA and, in 2019, Jussi Viljanen captained Finland and Albert Fronek was capped by the Czech Republic.  A diverse club indeed! 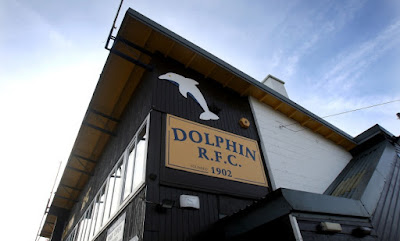 After tremendous success following their move to Musgrave Park, the club went through something of a barren spell in the second half of the 20th Century with a Munster Senior League in 1973 and a couple of Cork Junior Leagues early in that decade the only real notable success until the nineties. Dolphin were not founder members of the All Ireland League in 1990 but won the Senior League that season, earning admission to Division 2 where they remained until 1997. That season saw promotion to Division 1 as well as the 2nd and 3rd XV winning League and Cup doubles in what was the most successful year for the club since that famous inaugural season at Musgrave Park.
However, what followed was a bit of yo-yoing as they were immediately relegated but, in the club’s centenary year, won Division 2. It was another brief stay but they bounced back two years later and, in 2009, finished in the top 8 in Division 1 meaning they would play in the top division (1A) in the restructured AIL.
A year later, they finished third which represents the club’s highest ever position in the All Ireland League. Since then they have fallen to Division 2A where head coach Brian Scott and Director of Rugby John Aherne will be looking to climb the divisions again at Musgrave (Irish Independent) Park.
For more information check out the Dolphin RFC website here
Links to previous profiles...
Clontarf RFC, Dublin University, UCD, Lansdowne,
Terenure, St Mary's, Blackrock, Old Belvedere,
Cork Con, Buccaneers, Ballymena RFC, Garryowen,
Old Wesley, UCC RFC, Banbridge RFC, Navan RFC
Mark Strange (@realmarkstrange) : I am a freelance sports writer who has been published in soccer, rugby and baseball. I am also an avid fan of ice hockey and just returned last year from a year living and working in Vancouver. I previously played and was PRO for Randalstown Rugby Club before a knee injury cut me down in my prime! I became a Leinster fan when I was younger due to a certain Felipe Contempomi and I am the only blue in a sea of white in Ulster.
*****
Want to see your own rugby opinions on the web?
Click "Write for us" in the sidebar to find out how.