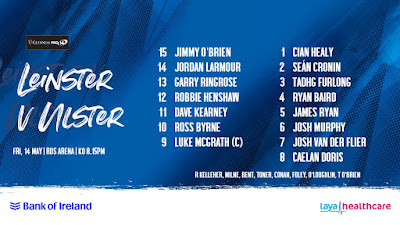 “I believe Leinster have a decent shot at winning the Rainbow Cup” is probably not a sentence that will get even the most passionate supporter of the boys in blue excited, which is fair enough.

But what if I put it this way…

“I believe Leinster have a decent shot at avenging Munster's result at the RDS in Round 1, possibly at Thomond Park”.

Friday morning was the first time I actually bothered to look at the table after two rounds, even after learning during the week of the dates, times and opposition for our final two matches.

Yet going into tonight’s match at the RDS against Ulster, I can definitely see a path to the final for us.  First, obviously, we’ll need to win our three matches with maximum points.  Far from a given I know, but particularly after last weekend’s recovery in Galway, there’s not many who would bet too much against it.

Right - so say that happens, and we end up on 20 points.  To finish in the top 2, we would then need 5 teams from Munster, Benetton, Dragons, Ospreys, Scarlets, Glasgow & Connacht to drop points, even if it’s a win without a try bonus.

And since we get to play both the Dragons and Glasgow, we have that in our own hands, plus with Munster playing Connacht tonight, I reckon that puts us at 2 from Benetton, Ospreys & Scarlets required to slip up, which does appear possible.

Yes, I’m stacking up a lot of ifs and buts there, but what I’m getting at is that I actually do think it’s worthwhile for us to go for the maximum win tonight.  Of course it won’t be easy, especially as the Ulstermen are in need of a good result themselves and have sent down a really strong squad, but I’ve at least managed to talk myself into really being a lot more “up for” this match tonight than I thought I’d be.

(UPDATE - Apparently the organisers have messed with the format again with a view to having a final between the top team in both North and South groups, and if so, now we need 6 of the above 7 to slip up, one of them has to be Munster, plus we still need max pts)

And it’s not like our 23 is too shabby either.  It’s brilliant to see names like Caelan Doris and Jimmy O’Brien back on the team sheet for starters, but all round it’s a really strong lineup and only in the halfbacks do we really seem to have anything close to vulnerability.

If skipper Luke McGrath and his out half Ross Byrne can both play 65 plus minutes, I really fancy our chances, but 9 and 10 are positions where our treatment table has been particularly hit in the last month or so, which means we go out tonight with the 1-cap Cormac Foley backup scrum half and I’m assuming Jimmy O’Brien set to step in for Ross if required.

But other than that, we’ve got the Henshaw/Ringrose centre partnership back together, a vastly experienced front row, two strong young Ryans in the engine room, plus two top-notch Joshes joining Caelan in our back row.

Tack on Ronan Kelleher, Bent, Big Dev, Jack Conan (very relieved to see his name I have to say) in reserve and we certainly have the manpower capable of keeping us in contention.

Like I said, Dan McFarland isn’t exactly sending his Academy squad out either.  I have harped several times on the bad luck they have had over the years, and this season has been no exception, having been denied a path to the Pro14 final despite having an excellent record plus being asked to do the nigh impossible of winning four in a row on English soil to lift the Challenge Cup.

And you can be sure that from the strong centre pairing of McCloskey and Hume to Jacob Stockdale once more at 15 to skipper and freshly picked Lion Iain Henderson to Nick “Marcell who?” Timoney at number 8, they are likely to be just as motivated as we should be and I have to say the 18-point spread put forward by the bookies does seem a bit harsh.

Still, I have to back Leinster to come out on top I’ll go for a 8-10 point margin,  and although a 16-point head start didn’t phase us last week, I still think we will have to strike early tonight if we’re going to get ourselves on track for that bonus point.  One possible drawback is that I can see a bit of niggle creeping into this one, so hopefully it will be something referee Mike Adamson can handle fairly.

It really is shaping up to be a really entertaining double header of interpros tonight so let’s bring it on.  Also, keep an eye out for the roll out of the new Leinster Legends jersey by OLSC around halftime in the Munster/Connacht match - proceeds are for a very good cause.

As always we’re giving the RDS clash the full Harpin treatment so follow us on Twitter throughout then hop on the Facebook page after the full time whistle to leave your thoughts and I’ll share the best contributions on Sunday.  JLP