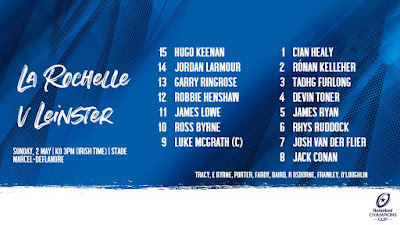 First to harp on the #StopOnlineAbuse campaign.  I’m supporting it by shutting down the HarpinOnRugby Twitter, Facebook & Instagram accounts from 3pm Friday 30 April to 11.59pm on Monday 3 May.  There may be a couple of automatic posts during that time but I will delete them.

Obviously I am 100% behind the cause itself and I do believe that social media companies should do more.  However, I might not be convinced by the same percentage that this form of protest will be effective.  Yet support it I shall.

Anyway, that naturally makes my coverage of Leinster’s biggest match of the season all the more difficult but it’s all about sacrifice so I will find ways around it as best as I can.

Right - to the match in question - what a fascinating contest this is.  The only thing about this La Rochelle side that might suggest they’ll be underdogs is the fact that it is their first semifinal.  Everything bar experience suggests this could be one of the great European clashes.

The top line of the preview has to be the “irresistible force” of Les Maritimes’ pack going up against the “immovable object” of the Leinster defence.  The home side is famed for its physicality with powerhouses like Atonio, Skelton, Alldritt and Vito and this matched with their famed “KBA” approach including a sizzling back three of Ruhle, Leyds and Dulin to provide the killer blow is what got them here and also to the verge of a semifinal berth in the Top 14.

However, while COVID cancellations have severely restricted our opportunities to watch Leinster in big one off matches this season, the evidence we do have suggests that Leo, Stu & co have been well able to get us match ready even when our previous outings have been less than ideal.

We got the first of this evidence in January when Jack Carty led Connacht to a convincing 35-24 ambush at the RDS.  The following week we had to pick ourselves back up for a top of the table clash with Ulster and needed some creative selection solutions to get it done yet still managed it.

Our next recovery was more important again.  This time it was those pesky Ospreys storming our “D4tress” and although in terms of the final league table it didn’t matter, it was hardly the best preparation for the visit of a determined Munster side for the league championship one week later.  Yet we managed that as well.

The final setback was a fixture at the RDS which didn’t happen, namely the visit of Toulon.  That was shaping up to be a great start to the weekend before it was cancelled at the 11th hour so all we could do was watch Exeter comfortably dispose of Lyon knowing we had to prepare to go there ourselves.  And that turned out to be the most impressive managing of the lot.

Which brings us to where we are.  Obviously none of us blue-goggled fans were over the moon after Munster played us off the park last Saturday and reading accounts on media both mainstream and social it seemed to all intents and purposes that it was a meeting of sides with equal motivation.  Well quite simply if we can find the same levels of recovery on Sunday and play the way we have shown we can this season, we’ll be well on our way to booking a date in Twickers on May 22.

Of course the defeats were not the only adversity we faced during those recoveries.  Pretty much all of those victories were achieved despite the absence of our club captain and talisman Johnny Sexton for various reasons.  But in each case the man to step up and fill the void was Ross Byrne, and it is he in whom we must put our faith once again.

Fittingly it is to be his 100th cap for the province and I’m pretty sure I speak for a majority of Leinster fans when I say we have complete faith in him to get the job done.  With a strong pack more than able to match the opposition, a proven leader in Luke McGrath at 9, a centre partnership so strong that both are in the Lions conversation and finally a back three with strong finishing pedigree, Ross has plenty of arrows in his quiver and he knows how and when to use them.

And when it comes to the bench, in the forwards we have a more than capable set of five to come in and complete the 8 minutes when required.  Tracy, Byrne, Porter, Fardy & Baird would all be pushing to start in most sides in Europe.

If we had to point to one potential Achilles heel in this Leinster matchday squad it would probably be in jerseys 21-23.  That’s not to say the Munster-bound Rowan Osborne, Ciaran Frawley and Rory O’Loughlin are incapable of doing a job, it’s just that with a fully fit squad we know there would be other names in those spots.

This means that while our halfbacks were always going to be playing with a target on their backs anyway and we’re well used to this type of treatment, the consequences could arguably be much greater, and while we never want any match to hinge on the interpretations of the officials, it may well be a critical component here.

But even if we do lose key creative players earlier than we’d like, our task will still be the same.  La Rochelle thrive on chaos situations more than most and their pack will be keen on creating it.  So this means we need to do everything we can to control both territory and tempo, something that McGrath has shown himself to be good at this season in particular.

Then it all comes down to accuracy.  When a chance arrives, take it.  Yes, I know that’s an obvious thing to say and it applies to pretty much every match, but it is also something on which many teams fall short and it is what has given Leinster the success we have enjoyed so far this season in the big matches.

So even with all those possible drawbacks, the strength talent and determination from the ROG-inspired home side, our need to bounce back from a bad defeat, our perceived vulnerability in reserve...there is a very strong case to be made that this Leinster side can overcome them and get a result, which is why I’m agreeing with the bookies that we’ll do it, though while they say by 6 points I feel it might end up a tad closer, possibly 2-4.

If it’s that close when the clock is in the high 70s we’ll definitely need every tackle to stick but again, I reckon we can do it.

So here’s how the Harpin coverage is going to play out.  Rather than tweet during the match, I’m going to type out my thoughts in a post here on the website “live blog” style, though I probably won’t publish it until full time.  As for leaving comments after the match, well the social media blockade won’t lift until midnight on Monday so you can leave your thoughts on the Facebook page then and I'll post the best ones later in the day. On Monday evening I’ll be a guest on The Rugby Room podcast to give some thoughts which on Tuesday I will turn into a match writeup.

Here’s to another successful European weekend for Leinster - see you on the other side!!! JLP