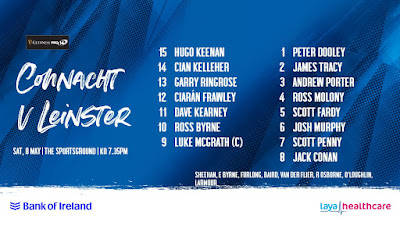 I should really harp on the Lions selection first, shouldn’t I, although on our podcast during the week there wasn’t exactly an abundance of enthusiasm for the tour.

Obviously I’m delighted for all the Irish lads selected, particularly Jack Conan, and not just because this greatly increases his chances of one day being invited to play for the Barbarians, thus allowing for the easiest pun-based rugby headline ever written.  Despite not being in the predicted squads of many, he has still earned this recognition by knuckling down and performing despite injury setbacks.

Also obviously, I raised an eyebrow at some Leinster omissions, listed here in decreasing order of surprise - Ringrose, Ryan, Sexton, Healy.  But if you’re not realistic about how different these selections are going to be when compared to your own then you’re setting yourself up to be triggered.  So I offer congrats and commiserations to all of those who deserve them and look forward to watching the tour unfold, same as I would any other.

Now to the match at hand.  It’d be easy to say it doesn’t really matter in the grand scheme of things, given the competition it’s in.  Yet even before we harp on the lineups there are a ton of reasons to look forward to it.

First, well it’s an interpro of course, and when it comes to the Pro14 this season, let’s face it they have provided by far and away the best contests.  But when you hone in on the western and eastern provinces in particular, things get even more interesting.

Obviously Leinster will be looking for revenge of Connacht’s ambush at the RDS to kick off 2021, and conversely they surely wouldn’t say no to doing a “season double” over us (same competition or not, we all know that’s what everyone would call it).

Then we move to matters on our side.  I was nervous to look back and find when was the last time Leinster lost two (calendar) weekends in a row.  I could be wrong but it seems to have been 2016, Leo’s first season in charge, when we lost to Wasps on Jan 23 followed by Dragons on Jan 29.

I’ve spared my Research Department the chore of looking up the last time we lost three in a row, and whenever that might be I certainly wouldn’t want it to change as of this weekend, and I’m pretty sure Leo & co feel the same.  So as you can see there’s more than enough to get us up for this one after the disappointment from the Stade Marcel-Deflandre and judging by the matchday squad it looks we’re going for it.

Having said that, Connacht aren’t exactly putting out their Academy side themselves.   Although Jack Carty may not be involved, many others who hurt us in January are, like Tom Daly and Gavin Thornbury, plus in Abraham Papali’i on the bench they have the potential to bring some final quarter carrying pain similar to that inflicted on us by Skelton last Sunday.

Then you look at Leinster’s lineup, easily our strongest ever in the competition’s history 😉.  First, the similarities in the backline to last weekend hit you but then you notice that the differences are all worth watching too.  First and foremost among these is Ciarán Frawley, who really could do with a run of matches for the remainder of this campaign.

In the forwards I suppose technically you could say there’s a “second string” look about it, albeit one with a couple of freshly picked Lions thrown in for good measure.  But they won’t be the only ones keen to impress and they will be definitely tested by the home pack.  Hopefully they will have taken all the “not winning enough collisions” punditry from during the week on board and bring it to bear on our hosts.

Then we get to the bench.  Sure, Connacht have some beef on theirs but we counter that with Furlong, Baird, JVDF, Larmour...all of whom are bound to be itching to get back to winning ways.  Safe to say this match promises to be watchable from start to finish whatever the scoreline.

Which leads me nicely to my prediction.  The bookies have Leinster by 9 which is sure to be used by Andy Friend to motivate his side - we were meant to win by 21in January, after all.  I do think we can win once we can control the tempo and we do have a number of proven finishers on the park so I’m going to back us to prevail by 5-7 but it certainly won’t be easy.

As always be sure and follow us on Twitter @HarpinOnRugby during the match and at the full time whistle, head on over to the Facebook page and leave your thoughts - we publish all the best comments on Sunday before doing our own writeup on the Monday.

Here’s to some crucial match points as we fight our way back up the Rainbow Cup (North) table!!!!  JLP