A selection of the “keyboard warrior” reactions after the full-time whistle of our featured matches of the weekend.
If you’d like to contribute stay tuned to our Facebook page for our “Feel free to leave your thoughts…” posts which show up around full time after Leinster & Ireland matches.
NOTE : This week's 'Online comments...' post is a little bit different.
We respected the #StopOnlineAbuse campaign by not posting on Twitter, Facebook or Instagram from 3pm Friday to midnight Monday, so to gauge opinion from the #LARvLEI match I had regular Harpin contributors post comments in our WhatsApp group.  The "feel free to leave your thoughts..." post went up at the end of the boycott so there are still a couple of comments from there as well as the regular ones I pulled from Twitter at full time.

Cian "RugbyKino" O'Muilleoir (via WhatsApp)
A promising start of putting pressure on and earning penalties in the first 20 unfortunately weren't exploited to the level which they should have at this level. As La Rochelle used their sterling defence to grow into the game Leinster looked devoid of ideas, and combined with some poor decision-making & execution lead to a result which was all but nailed on with the James Lowe yellow.
While some of the referee decisions are likely to be picked over online, there's little doubt in my mind that the better team won on the day.
Leinster were out-planned, out-gunned & out-played. It's likely that the disjointed nature of the season contributed to a lack of tempering and a bit of dog for a match of this ferocity, but without having hit the levels produced against Exeter this is likely a thin excuse. Perhaps more regular matchups against big packs in the Pro16 season coming up will better prepare for tooth & nail battles like this.

Well done @staderochelais 👏🏻👏🏻 Hard luck Leinster, not meant to be. We will come back stronger from this next season 💙🏉💙#SRvLEI #HeinekenChampionsCup

Conor Cronin (via WhatsApp)
Leinster played with an intensity and intent that only lasted about 10 minutes and then just seemed to drop away after. Yes there were a few opportunities that if the pass were better might have given scoring chances, but La rochelle were much more clinical at the breakdown, kept leinster away from those chances and brought more to the game. Leinster will have to wait for the 5th star, I'm hoping la rochelle play the same way in the 22nd so toulouse have to do the same

There is something beautiful about this loss.....I’m not sure why or how to put into words but it will come to me. Not today, maybe not tomorrow but I will sleep safe in the knowledge in knowing that tomato is a fruit and I have the wherewithal not to put it in a fruit salad

Big Joe Shep (WhatsApp)
Technically & Tactically outplayed in every facet today! We showed nothing of threat & unfortunately deserved what we got.... That's a poor day at the office for Leinster. I'm genuinely struggling to take any positives away from this.
Fair play to ROG & Stade Rochelais. 👏🏉💯

LAR have been excellent and I'm not sure there was much more that Leinster could do.
Benches were the difference. Leinster unable/unwilling to change either of their half backs tells it's own story.

Paul Smith (Facebook)
Hard not to be bitterly dissapointed but also hard not to say the better side on the day won. If we'd taken the chances we had in the first 30 minutes or so it might have been different bit unfortunately we didn't so good luck to LA Rochelle in the final. Hope they go on and win it.

No complaints with this. Super by LAR. Dominated 2nd half to be fair.

Cant even be gutted we've been that outplayed. #LARvLEI

Kettlebell Padawen (Facebook)
La Rochelle did onto Leinster what Leinster normally do every one else ie win collisions. Same as Saracens did. And it will be ever thus until Leinster learn to play around the teams with the biggest of packs or the get even bigger athletes themselves
Kevin Kelehan (Facebook)
Kicking the ball back cheaply is a guaranteed way to lose matches.

Andrew Potts (Facebook)
It would appear when we get to the pointy end of the season that Leinsters weakness is the scrum, the first scrum went their way and they gained confidence from that. Every forward will tell you the boost they get from winning a scrum. The last three losses in the European Cup that weakness was exploited.
Leinster have the players to fix that weakness it just needs more focus when it comes to the knockout stages of Europe.

Best of luck to La Rochelle in final. Third time Will Skelton has done a number on Leinster. House Private Family Flowers only.

Ted Maher (Facebook)
Better team won but don’t think there was that much in but.
The finger tips of Baird and Lowe away from almost certain tries.
The first pen missed by Byrne which on his form you’d of thought it was a gimmie.
The head shot of Furlong another day would be a red card.
But that’s rugby and it’s why we love it.

Would have liked to see an Irish team in the final, but hard to deny La Rochelle that win!

Kept the scoreboard ticking over all game, Skelton and Bourgarit menaces at the ruck, defensively so strong.

The Top 14s two form teams this season, should make for a great final.

Chris McDonnell (Facebook)
I heard alot about that we were out muscled but the reality is our backs were the problem. Larmour and Lowe gave away penalties in poor areas, we butchered chances in the first half. But the biggest issue was the half backs, no control or decision making. Ross doesn't make mistakes but how much of that is he doesn't take chances. Luke again when we were under pressure his only though was to a poor man's Conor murrary and box kick. This is not the first big European game he has shown he's not a top European class 9. Maybe if JGP was on the bench his energy might have made a differance. Please don't go down the route of thinking players need to be bigger, they just need to be better.

The intensity and accuracy of @staderochelais not to mention their defense, size and offloading ability has neutralized the @leinsterrugby game plan. Heartbroken for the lads but can’t think of a side I’d rather lose to than this burgeoning La Rochelle group under @RonanOGara10

Gerald Williamson (Facebook)
Leinster were outplayed in most areas of the pitch. ROG and Gibbs had done their homework on Leinster and knew where the threats would come from. One could see that LR were far more hungrier than Leinster to win with their forwards bossing Leinster up front. Note that the ref missed a lot of crooked throw in at the lineouts. Why did McGrath keep repeating the high ball up & under & basically giving the ball back to LR. To be honest LR were the better team on the day & deserved the win. 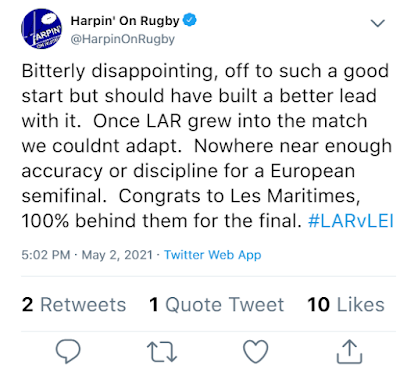 (I wrote down my thoughts after the fulltime whistle and later turned it into a "fake tweet" using a generator site.)
Many thanks to all who offered opinions.
Look out Monday for our match writeup JLP
at May 04, 2021