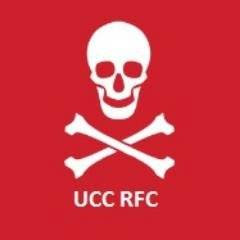 This week we travel south to the Rebel City again to look at the students of University College Cork (UCC). They are a club shrouded in history but some of that history isn’t altogether clear. That being said, it can be argued that the foggy details only adds to the mystique of the club.
Queen’s College, as it was known then, was formed in 1849 and, while it is assumed that there was some form of sport played back then, the first official record of rugby football being played there was in 1872 when a rulebook was written by students of the college. The sports is considered to be as old at the college as it is at Trinity College who also wrote a rulebook around that time. The two clubs are enshrined in the history of Irish Rugby as the first two clubs to make the game serious and add some form of formality to it.  “The Rules of Foot Ball as Played at Queen’s College Cork, 1872” is a piece of Irish and World rugby history.
The club at the college played formative games against local clubs such as Montonette FC, Bandon and Cork Bankers in what were largely 22-aside affairs – and you think finding space in the modern game is difficult! Part of these early sides was Professor W.A Cummins who became the first UCC man to represent Ireland in 1879 and the British and Irish Lions THIRTY ONE YEARS LATER in 1910. Now that is longevity! Another 19th century Irish rugby great Tom Harrison also donned the famous UCC jersey.
A running theme of this series is the jerseys and colours of Irish clubs but there is no club in the world, never mind Ireland, who has one quite like UCC. The red jerseys with the black band is one thing but the skull and crossbones that adorns all UCC sports tops is quite incredible. Like much of club history, the exact origins of the ‘old skull’ is unknown but it is thought that the students of Queen’s College adopted it as a nod to the fact the school was largely a medical school at its formation. Either way, it is a stunning and unique design.
The club moved into their now historic grounds at the Mardyke in 1911 where all college sports including rugby, soccer, hockey and hurling clubs plied their trade. The club won five Munster Senior Cups before settling there and won their first Munster Senior League in 1913 in a League/Cup double. Arguably the most famous season in club history came in 1935/36 where they won a famous treble of the Munster Senior League, Senior Cup and the All-Ireland Cup.
After the trailblazing Cummins was the first clubman to adorn the red of the Lions, there have been a fair few others including WJ Roche and MF Lane before more recent famous names such as Tom Kiernan, Moss Finn and Donal Lenihan. All of these names were still members of the club when they received these honours while graduates of the college and rugby club who have also toured include Moss Keane, Paul Wallace and Ronan O’Gara.
Meanwhile, the likes of Peter Stringer; Frankie Sheehan; Mick O’Driscoll; Denis Leamy and Jerry Flannery have come through the ranks at the Mardyke before representing Munster and Ireland. The club has a history of producing quality rugby players in south Munster and the current crop of players led by captain Shane O’Hanlon and head coach Brian Walsh will be looking to add to the honours list at University College Cork and, as in the words to the old college song “make the old skull gasp or grin”.
For more information check out the UCC RFC website here
Links to previous profiles...
Clontarf RFC, Dublin University, UCD, Lansdowne,
Terenure, St Mary's, Blackrock,
Old Belvedere, Cork Con, Buccaneers,
Ballymena RFC, Garryowen, Old Wesley
Mark Strange (@realmarkstrange) : I am a freelance sports writer who has been published in soccer, rugby and baseball. I am also an avid fan of ice hockey and just returned last year from a year living and working in Vancouver. I previously played and was PRO for Randalstown Rugby Club before a knee injury cut me down in my prime! I became a Leinster fan when I was younger due to a certain Felipe Contempomi and I am the only blue in a sea of white in Ulster.
*****
Want to see your own rugby opinions on the web?
Click "Write for us" in the sidebar to find out how.